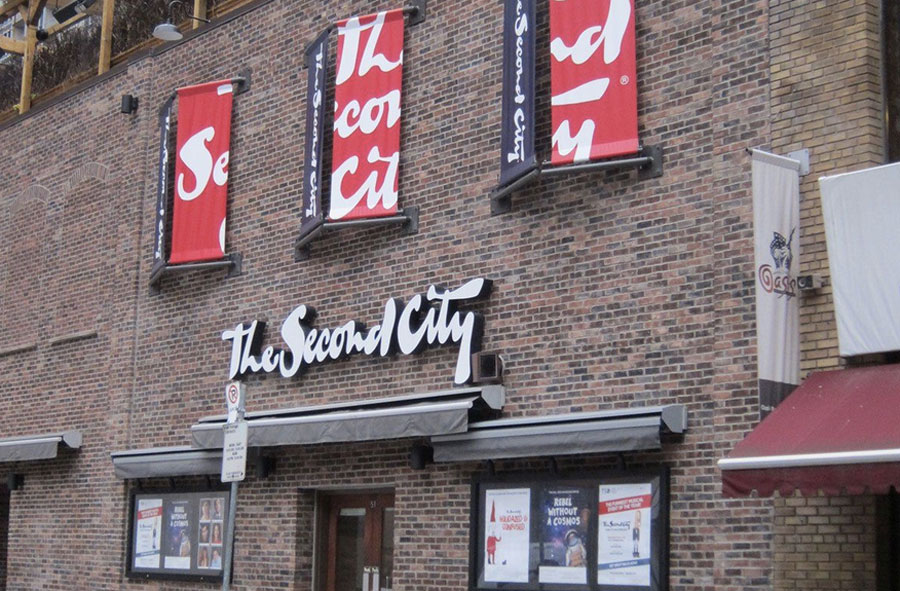 Two of downtown Toronto’s beloved institutions – improv comedy club Second City and Wayne Gretsky’s Toronto and Oasis Rooftop Patio – were given notice this week that the building where they’re located is about to be demolished to make way for – you guessed it – another condo building. While Second City – which has been at its current location on Mercer Street and Blue Jays Way for 15 years – has said it will stay in the city much to the relief of Torontonians, Wayne Gretzky’s sports bar announced it will be closing its doors after 26 years. Oh, if these about-to-be-bulldozed walls could talk!

In light of this news, we throw back to this story about other legendary Toronto haunts from Hemingway’s old digs to the Shoppers Drug Mart (formerly Friar’s Tavern), where Bob Dylan met The Band and changed musical history.

Dylan, Hemingway, and the History of Legends Hiding in Everyday Toronto Addresses

Years ago, before we were married, Bianca and I travelled to England with another couple, with a stop in Bath on route to Stonehenge. As we toured the remains of the Roman baths, it struck me that Julius Caesar walked there. (Of course, that realization would be a little more mundane in Rome. That city is full of Caesars’ ghosts).

Ernest Hemingway didn’t conquer the known world except with his words. But if you’re walking north of St. Clair on Bathurst in Toronto, you will walk the same streets as “Papa,” who worked for a time as a reporter for the Toronto Star, and whose erstwhile apartment is now being sold as a condo.

You can live where Hemingway spent his brief, unhappy Toronto tenure (he’d previously lived in Paris) for $730,000, with monthly condo fees of $911 (he paid $85 a month rent).

Toronto is a city filled with those kind of ghosts. Go 100 meters in one direction from my East End house, and a Tim Horton’s sits where the Roxy Theatre used to be, where people once threw toast at midnight screenings of the Rocky Horror Picture Show. Go 200 meters in another, and you’ll see 6 Condor Ave., where Martin Luther King Jr.’s assassin James Earl Ray lived in the period during which he was a fugitive. (That house was last for sale in 2010 for $550,000).

A city builds upon itself, and history morphs into more history. A house on the corner of Gerrard and Church street, across from Ryerson University, is Mary’s Home Emergency Shelter for Women. It is the former home of Egerton Ryerson, for whom the University is named (a founder of the public education system and, sadly, also a founder of Native Residential School system).

In the ‘70s, that space was, first, a folk club called Egerton’s, and later, during the punk/New Wave era, was renamed The Edge (where I practically lived as a Ryerson student). There, performers like The Police, The B-52s and Joan Jett paid their club dues on the road, and Canadian acts like Rough Trade and Martha & the Muffins polished their performances (Joan Jett & the Blackhearts’ 1981 show had a $5 cover).

It is a fact of life that, as a city gentrifies, it is the scruffy live venues that suffer. Case in point in New York: an upscale John Varvatos fashion store sits where CBGB’s used to be — the onetime launching pad for The Ramones, The Talking Heads and Blondie.

Toronto is, in fact, full of places where you can shop where greatness once performed and caroused.

-The Shoppers Drug Mart at Yonge/Dundas was once the Friar’s Tavern, where Bob Dylan met The Band and changed musical history.

-The College of Makeup Art & Design on Lombard used to be the Old Firehall, the longtime home of Toronto’s Second City, where the likes of Catherine O’Hara, Eugene Levy, Andrea Martin and, later, Mike Myers tested their characters and sketch comedy.

-Another Shopper’s Drug Mart, on Bayview north of Millwood, is the former Bayview Playhouse, which inherited a famous 1972 production of Godspell after it had played a few months at the Royal Alexandra. The cast included Short, Martin, Levy, Dave Thomas, Gilda Radner and Victor Garber as Jesus. Musical director was a kid just out of U of T named Paul Shaffer.

-Speaking of Godspell, a detached brick house at 1063 Avenue Road near Eglinton was rented by Short and Levy during the production. It hosted parties and comedy brainstorming sessions that became the bones of later SCTV and Saturday Night Live sketches. Dan Aykroyd has said the house, “should have a plaque.”

-The Salvation Army Thrift Store at 665 St. Clair W. used to be the Maple Leaf Ballroom, a punk venue where U2 played a concert in 1981.

-The Rexall Pharmacy at Bloor and Brunswick used to be the Brunswick House, upstairs of which was Albert’s Hall, a blues and jazz venue that, in the ‘70s, hosted the likes of Etta James, Muddy Waters, Stevie Ray Vaughan and Buddy Guy.

-Until 2003, the Bloor Street United Church at Bloor/Huron rented out its basement as Fat Albert’s Coffee House, where Gordon Lightfoot and Neil Young played in the old days, and newer performers like Jane Siberry and Ron Sexsmith played towards the end.

When Fat Albert’s closed, Trailer Park Boys’ Jonathan Torrens bought a hardwood bench for $25 that was used on the set of his CBC show Jonovision and now sits in his kitchen. “I like to think Lightfoot probably sat on it at some point, trying to chat up some deep-thinking hippie gal,” he tweeted recently.

-And probably the most profound “used-to-be” for Hogtowners is the Loblaws at Carlton and Church, the former Maple Leaf Gardens. Up top, what used to be the “nosebleed section” has been preserved as the Mattamy Athletic Centre, a tiny arena for Ryerson University teams, which played host to international basketball at the Pan Am games.

My favourite fact about the Mattamy Centre is that Don Cherry can’t pronounce it. God knows how many takes of his recent Rock ‘Em Sock ‘Em hockey video he shot there, and it still came out, “Manatee Centre.”

Meanwhile, as you rummage for the right President’s Choice frozen pizza, you may very well be standing where George Armstrong scored that last-ever Cup-winning Leafs goal.

To explain for Leafs fans, a “Cup-winning goal” is one that wins you the Stanley Cup. The Stanley Cup is… oh, never mind.

At least some things never change.