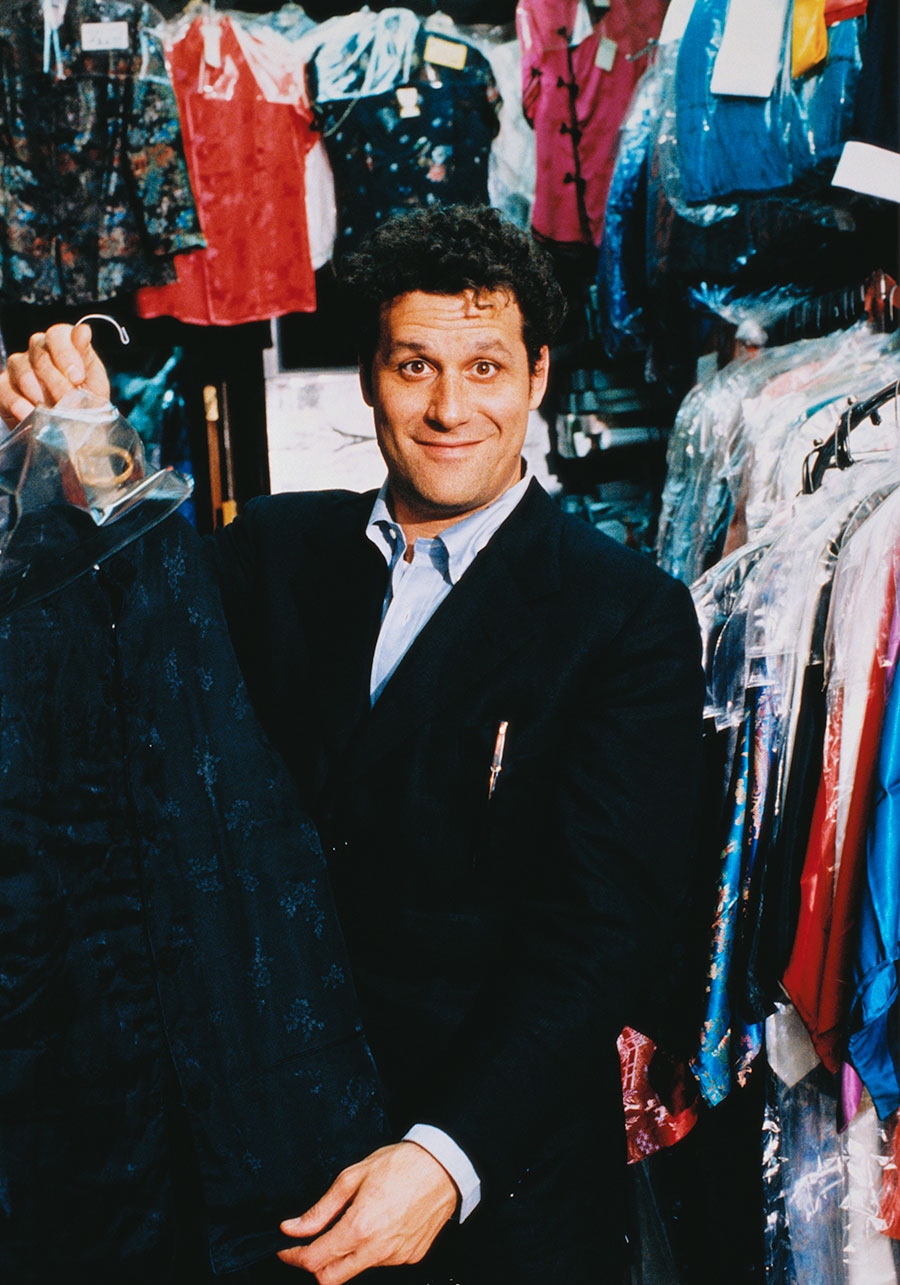 Those of us lucky enough to have experienced the fashion frenzy of the late ’80s and ’90s likely had a fashion crush on the überfabulous Isaac Mizrahi — a New York yeshiva boy-turned-designer whose artful eye and penchant for tafetta and show biz made him one of the most iconic talents of the era.

Isaac’s electric runway shows were among the most anticipated of the season, and his A-list celebrity devotees, from Liza Minelli and Liz Taylor to Sandra Bernhard and Sarah Jessica Parker, provided him with the kind of pop cred other designers would kill for. By 1994, the mighty Chanel was financially backing his line.

Marvellously witty and unabashedly neurotic, Isaac always seeemed happy to put himself out there — and for well over a decade, his modern minimalist take on glamour coupled with his engaging personality made him the absolute darling of the American fashion scene. The celebrated 1995 documentary Unzipped, directed by his then-boyfriend Douglas Keeve, opened an intimate window onto Isaac’s personal world, establishing itself and its subject as industry classics. Because of his myriad talents, I regarded Isaac as a kind of renaissance man, helping us to better appreciate the importance of style in our lives and elevating the role of fashion designer to some kind of social therapist. But what always impressed me most about Isaac was his sheer humanity and, particularly, his willingness to share his doubts, fears and foibles. It’s with that openness and honesty that Isaac penned IM: A Memoir.

The autobiography, published earlier this year, paints a poignant picture of a passionate artist trying to gain acceptance from his family while struggling to march to his own unconventional drum. I spoke with the 57-year-old about the book and about his life journey.

JB: The pursuit of happiness is a theme that runs through your memoir. You note how the older you become, the harder it might be to be happy because you think more but you tend to act less.

IM: That’s sort of what the whole book is about to me. And that’s why I open the book with that Susan Sontag quote: “Just wait till now becomes then and see how happy we were.” It just seemed to sum everything up. It’s this idea of going through something and being so full of anxiety you can’t ever see straight, and there’s a great struggle. But when you look back on it, you think so fondly about what a great time you had. As you get older, you just become much more aware of mortality and the concept of happiness and what the hell it is. It’s about living moment to moment and trying to repress misery. And you find others to understand that. You can have dinner and talk about how lousy everything is and actually enjoy that. It’s a funny thing.

JB: A wonderful thing that happened to you a few years ago, which also happened to me four years ago, was falling madly in love. Did you you ever feel as though true love finally rescued you”?

IM: It was the greatest surprise ever. While it may have been a kind of rescue, I don’t want everyone to get the wrong idea because my greatest advice is to not expect it, to not try and make it happen because you can’t. It’s like paying people to sit in your front row and clap when you send out a dress. That’s not how it happens – especially when it comes to falling in love and finding that wonderful balance. The thing is I thought I was so happy with my dog, my job … and I kind of looked happy. But happy is a big word. I was the one thinking it was never going to happen and then, when it happened again, it was like this lesson about optimism.

JB: I know what you mean. I was at a point where I finally had given up on love. I thought, “I’ve got a great life. I’m just going to enjoy living it and I’m so grateful for everything.” Then all of a sudden, it happened.

IM: When I was single all those years — and I’m sure you had this, too – you had people telling you, “The minute you forget about it is the minute you’re going to meet someone…” And it was true. But I hate proliferating that because it’s one of the most annoying things to hear if you’re single.

JB: You’re very open about that fact that growing up in a Syrian Jewish religious family wasn’t easy for you. How did you come out of that childhood with such a strong sense of yourself?

IM: At the beginning of the book, there’s a sentence about the fact that I was born homosexual. I really considered that sentence because I think there are some things that you’re just born with, like you’re born with a formed kind of sexuality: you know you’re straight or gay or bi or you’re a different gender. And then sometimes, you’re just born with a kind of resilience and knowledge. You know when the deck is stacked against you — like when you have rabbis and people who are supposed to be taking care of you being bullies and telling you you’re not any good. And I said, “No! Something’s wrong. Hang on a minute here….” Then when I went to performing arts high school, it all changed. My conviction about who I was was confirmed. And so, now it’s this learned optimism.

JB: The honesty in your book is delightful. Even though you’re still in the fashion game, with licenced lines of affordable clothing and accessories, you wrote about what it felt like when you shut down your high-end label in 2015 and how you finally admitted how much you hated the potential superficiality of fashion. How do you feel about fashion today?

IM: There’s nothing worse than those expensive clothes that aren’t any good and that people assume are aspirational because they’re expensive. And it’s all because of the whole fashion marketing machine. There are some designers who are true to themselves and so good at what they do and have such humour about it and understand the irony of trying to create this new thing every six months. And I love them. [But] there’s this machine of fashion that’s so annoying, and I don’t like it. But I love fashion. I love looking at stories about women’s lives that unfold on a runway. But it’s a rare thing and has a short life. I don’t think a designer is that great after 10 or 15 years. It’s like Karl Lagerfeld. He was amazing but, in the end, it was like, “Okay, bouclé and gold buttons and little pumps. Got it.” And in this crazy modern way, with sneakers or whatever – how many times can you do that? So you have to hire young people to keep it fresh and alive. When I was a kid, everybody approached me to do those lines the minute Karl did Chanel. There was this idea that everybody was going to revive things. I was offered 10 jobs and I kept saying, “No!” because I thought, “Why would I assume the identity of somebody else and go into their archives when I’m so busy creating my own collections?” It didn’t make any sense to me. But now, when I see these houses hiring young people to revive, revitalize and rethink … It’s not exactly this kind of cutting experience of creation.

JB: You had the chance to work with some of the greatest icons of our times – from Liza Minelli to Elizabeth Taylor to Audrey Hepburn. What did you learn from them?

IM: All of those people were like versions of my mother. She wasn’t intimidated by anything. She wasn’t intimidated by fashion magazines or by interior designers she was working with. She just followed her own star. That’s what you get from these women. They do not listen. Whenever young people ask me for advice, that’s what I default to: it came from my mother. She never listens to me. And she’s always rising to the top because of that. And that’s what I got from Liza. What made her was her years of working with Halston and observing. And then there was the necessity of certain things, like a shoe that was a certain height, and the onesie that went underneath because it was slimming and a bra that held her when she danced. It was all necessity. I think it’s always about that, this kind of inborn style meets the necessity of life. That’s what Liza and Audrey taught me. But it all goes back to my mother. I was always observing her and then reliving it with these women.

JB: And how is your stylish mom doing? I used to sit next to her at your shows. I always enjoyed watching her kvell [Yiddish for “burst with pride”].

IM: She’s good. She’s 91. And she loves the book. I’m telling you, Jeanne, that was a great moment of my life because I didn’t let her see anything until the book was published. And she really loves it and, after the second time she read it – she read it like five times – she actually thanked me for writing it. That was the greatest day of my life.