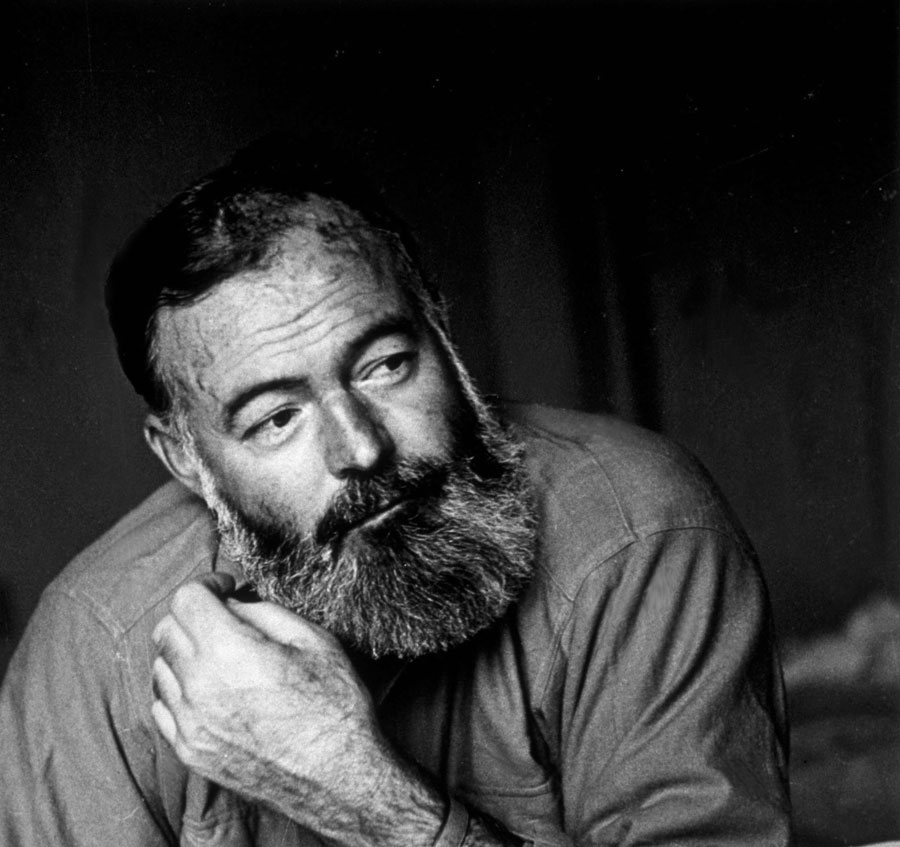 “You see, I am trying in all my stories to get the feeling of the actual life across, not to just depict life or criticize it, but to actually make it alive. So that when you have read something by me, you actually experience the thing. You can’t do this without putting in the bad and the ugly as well as what is beautiful.” — Ernest Hemingway (1899-1961)

Cultural icon, genius, larger-than-life, hyper-masculine, deeply flawed, misogynist extraordinaire, and “Papa,”  — these have all been used to describe Ernest Hemingway, considered one of the greatest American novelists and short-story writers of the 20th century.

Awarded the Nobel Prize in Literature in 1954, the former war correspondent was also known for his giant personality, his drinking and his hidden demons, as well as his passions for bullfighting, fishing and big-game hunting — all explored in his writing.

Long required reading in high schools, Hemingway’s writing is worth revisiting for its spare and powerful keen insights. To mark the 120th anniversary of his birth this month (July 21), here is a roundup of the essential titles. Hemingway was known to mine his own life for his stories of war, anguished love and glamorous American expats. The Sun Also Rises, first published in 1926, is based on trips he made while living in Paris to Pamplona, Spain, with his wife, Hadley Richardson and a group of American and British expats. Their experiences and romantic entanglements became absorbed into The Sun Also Rises, which explores the disillusionment and angst of the post-World War 1 generation.

The novel is considered one of the best english language novels of all time, “a literary landmark that earns its reputation as a modern classic.”

According to The Guardian, The Sun Also Rises has been in print continuously since its publication in 1926, and is said to be one of the most translated titles in the world. A Farewell To Arms (1929) by Ernest Hemingway

Hemingway’s next novel, A Farewell to Arms, has been called the best American novel to emerge from the First World War. The semi-autobiographical work follows the romance between Henry, an American volunteer in the Italian Ambulance Service, and Catherine Barkley, an English nurse in the British hospital at Gorizia, capturing the harsh realities of war. The author has said that he rewrote the ending 39 times to get the words right.

In its review of the 2012 edition, the Washington Times says the novel “stands, more than 80 years after its first appearance, as a towering ornament of American literature.” For Whom The Bell Tolls (1940) by Ernest Hemingway

Also rich in personal experience, For Whom the Bell Tolls was published in 1940. In 1937, Hemingway travelled to Spain to cover the civil war and three years later he published his enduring story of Robert Jordan, a young American in the International Brigades attached to an antifascist  unit in the mountains of Spain.

In its review, TIME summed it up this way: “For Whom the Bell Tolls is 1) a great Hemingway love story; 2) a tense story of adventure in war; 3) a grave and sombre tragedy of Spanish peasants fighting for their lives.”

Who could ask for anything more from a classic novel? The Short Stories of Ernest Hemingway (1987)

Of his writing, Hemingway once said, “If a writer of prose knows enough about what he is writing about, he may omit things that he knows and the reader, if the writer is writing truly enough, will have a feeling of those things as strongly as though the writer had stated them.” This sparse style — rich with straightforward prose, spare dialogue and a penchant for understatement — can be fully appreciated in his short stories. In these pieces, he revisits the subjects that fuelled his legend: soldiers in love, hunters and bullfights.

The Library Edition of The Short Stories of Ernest Hemingway includes the classics — such as “The Snows of Kilimanjaro,” “The Short Happy Life of Francis Macomber,” and “Hills Like White Elephants” — but also his first published story, “Judgement of Manitou,” which he wrote while he was still in high school. The Old Man and the Sea (1952) by Ernest Hemingway A Moveable Feast (1964): A memoir by Ernest Hemingway

Nearing the end of his life — suffering from the effects of two plane crashes and following his receipt of the Nobel Prize for Literature — Hemingway turned his attention back to the earliest days of his career. Largely complete before his death by suicide in 1961 (but published in 1964), A Moveable Feast draws on Hemingway’s notebooks from the early 1920s in Paris, which had been stored in the Ritz Hotel for almost three decades. The book is a series of glimpses of places, people and situations, and is suffused with the joy of youth and a passion for creativity. With figures like F. Scott Fitzgerald, Morley Callaghan, Gertrude Stein and James Joyce, A Moveable Feast is essential Hemingway, his final literary testament. Is it ironic or appropriate that the full, authoritative exploration of Hemingway’s often destructive, hyper-masculine life, comes from a female writer? Mary V. Dearborn, whose previous subjects have included Henry Miller and Norman Mailer, seeks to pull aside the curtains of the Hemingway legend in Ernest Hemingway: A Biography (published in 2017) and focus on the writer’s complexity. The book, which weighs in at over 700 pages, doesn’t shy away from the difficulties and unpleasantness of Hemingway’s personality and actions, but serves to reframe his persona and work in light of a genetic tendency toward manic depression and suicide, his struggles with addiction and pain, and the cost of living life as the “legend” he had created.