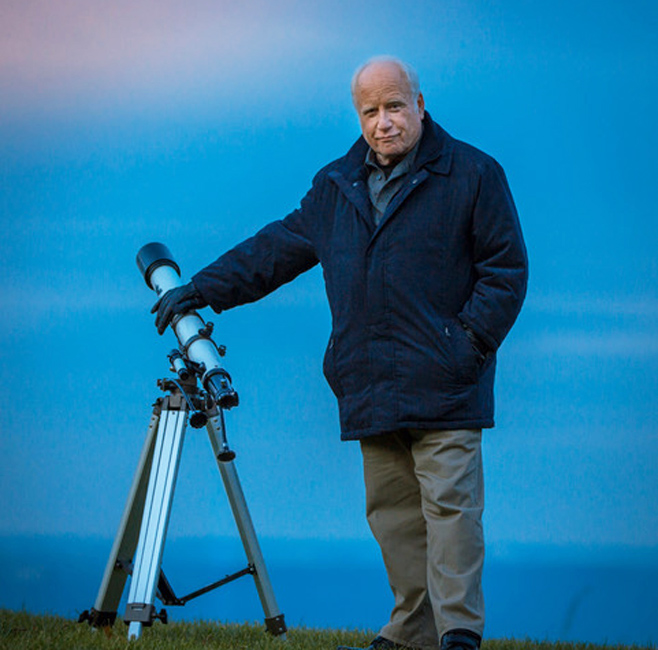 Richard Dreyfuss has a ticket to the moon. Literally.

“When we landed on the moon (in 1969), on that day I got reservation number 86, which was the offer by Pan Am, to honour reservations that were sought on that day,” the 71-year-old Oscar winner said during a recent interview with Zoomer. “And I feel perfectly at home having called and gotten that reservation. I have a very dear friend who actually has reservation number 11, so he wanted it bad enough. So, we’ll see.”

But would the actor actually take the lunar trip if they called his number?

“In a flat second. There’s no reason on earth for me not to do that.”

So while any plans with Dreyfuss are subject to change pending an invitation to the moon, in the meantime the actor stars as Angus, an octogenarian widower in a retirement home who earns a spot on a lunar shuttle in the new film Astronaut.

“When you have desires, notions, ambitions that change, they’re one thing when you are closer to high school, but as you near death you begin to entertain notions that you would have laughed at in high school,” Dreyfuss says. “And I’ve read enough to know that many of the world’s wisest people have already passed the fear of death and want to go right on, and either are going up on the reincarnation cycle or going down on the reincarnation cycle. And I don’t think that Angus has an opinion one way or the other, but he’s going to keep trying until his breath stops … Angus wants to go to space. He wants humanity to go to space. He wants what I want.” Canadian-born actress and filmmaker Shelagh McLeod, 59, who wrote and directed Astronaut, says the story is an important one because it addresses the idea that one’s age doesn’t determine one’s validity.

Astronaut — which was filmed in Ontario and co-stars Canuck talents like actors Graham Greene, Lyriq Bent and Colm Feore — serves as a roundabout career moment for Dreyfuss, whose first lead film role was as the titular character in the 1974 Canadian movie The Apprenticeship of Duddy Kravitz. Today, 45 years later, he retains his admiration for the Great White North.

“It would be admirable to an American, the idea that there can be a country that is filled with hope and civility and the notions that come with learning how to be with one another. How do you learn to fulfil the dreams that one has? Well, look north, because in Canada there’s a great deal that is already answered, and in America we seem to have gotten a little loosey-goosey. And right now, I think we needed a dose of Canadian, and it would do us good if we had some.”

McLeod, who was born in Vancouver but lives in England, noted that, “We had an interesting time shooting this movie because half of the movie it was okay and then it was minus 25 (degrees Celsius), and that’s a challenge. And I don’t think I’ve ever filmed in such cold temperatures. But still, the crew just got on with it. Richard never complained once. And it was a brilliant, brilliant experience.”

In his storied career, one of Dreyfuss’ most famous roles is, of course, as the UFO-obsessed electrician Roy Neary in the 1977 Steven Spielberg classic Close Encounters of the Third Kind. He was 30 years old when he made that film and now, four decades on, once again playing a character who has his head in the stars, the actor appreciates the message he’s able to project in the role.

Astronaut opens in theatres in Toronto and Vancouver, and everywhere on Video-on-Demand, on July 26.