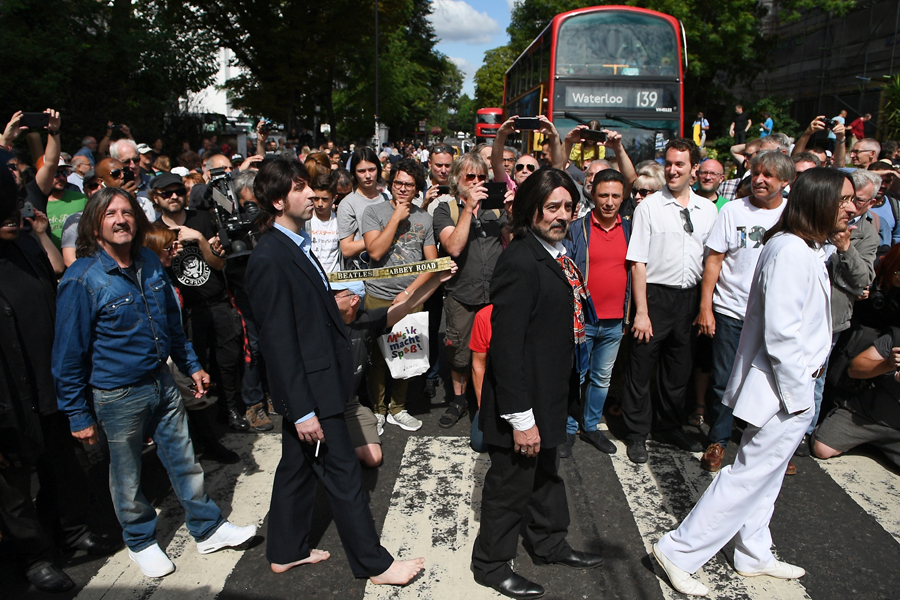 Why did the Beatle cross the road?

To get to the other side and embark on a solo career!

Alright, so jokes about crossing the road aren’t funny, be they about chickens or Beatles or, presumably, beetles.

But exactly 50 years ago today, four Beatles — John Lennon, Paul McCartney, George Harrison and Ringo Starr — really did cross the road and it really was a big deal.

On August 8, 1969, the Fab Four crossed the zebra-striped crosswalk on Abbey Road in the St. John’s Wood district of London, blocking traffic for a photo op cemented in the annals of history as one of the most legendary and recognizable rock and roll album covers ever. And though the Abbey Road album — voted by Rolling Stone readers as the best Beatles album ever — proved their penultimate disc, they actually recorded it after the sessions that led to Let It Be, their final disc.

So in a sense, the photo of the Beatles crossing Abbey Road — taken by photographer Iain Macmillan — is as notable for being the cover of the band’s most beloved album as it is for the fact that it’s one of the last official shots of the band intact.

And perhaps, deep down, that’s the reason why thousands of fans, including Beatles impersonators and musicians, gathered at the zebra-striped crosswalk on Abbey Road earlier today to take photos, perform songs and reminisce about all things Beatles.

All nostalgia is, in ways big or small, an attempt to reclaim a piece of the past and the sense of joy or fulfilment associated with it. And while you can’t bring the Beatles back, or travel back in time to relive the heights of Beatlemania, you can visit Abbey Road.

The Abbey Road zebra-striped crossing is a legitimate, tangible piece of Beatles history. It’s not a replica or facsimile. It’s actually there. It’s concrete (well, technically asphalt). You can touch it, sit on it, and even hold up traffic, as so many tourists do every day, to take a photo of yourself walking in the footsteps of the Beatles in the very same spot they strolled 50 years ago.

And that ongoing, unquenchable, nostalgic thirst for all things Beatles reveals itself in popular culture as well.

It’s why last June, Sir Paul McCartney, at 77, went viral for his appearance on an instalment of the Late Late Show segment “Carpool Karaoke” with host James Corden, touring his old Liverpool haunts and performing a surprise pop-up gig of Beatles tunes at a local bar.

It’s why this past June, the film Yesterday, about a man who wakes up in a world where the Beatles don’t exist and claims the Fab Four’s music as his own, cashed in at nearly $120 million at the worldwide box office. It’s also why every year, on June 25, fans celebrate Global Beatles Day, an annual, worldwide day of appreciation for the band.

And it’s why, this past July, a reunion of McCartney and Starr on stage during a concert in Dodger Stadium made headlines, with the pair jamming to “Sgt. Pepper’s Lonely Hearts Club Band (Reprise)” and “Helter Skelter” — an echo of what their high-profile but lacklustre Grammy reunion in 2014 could have been.

It’s clear that, decades after calling it quits at the height of their powers, the Beatles and their music still resonate deeply, both with original fans and successive generations. So to gather at the Abbey Road crossing and, for a moment, mark the anniversary of one of the most famous band photos ever — one that’s sparked everything from countless copycat shots to conspiracy theories about how the “original” Paul McCartney is dead — is to, for a fleeting moment, return yourself to the sepia-tinted days when you first saw the album or heard songs like “Come Together,” “Something,” “Oh! Darling” and the legendary closing medley. And, of course, like with Strawberry Fields and Penny Lane, it’s a chance to physically put yourself into a locale central to Beatles lore.

And for one Paul McCartney impersonator visiting Abbey Road on the 50th anniversary of the photo, it was a chance to propose to his girlfriend. She said yes, but we hope the couple’s union fares better than the Fab Four’s.

After all, just eight months after the Beatles crossed Abbey Road, Paul McCartney announced the band was breaking up.

12 Beatles Lyrics and What They Mean

Paul and Ringo and Bob and Neil: Recounting A Weekend of Classic Rock Reunions