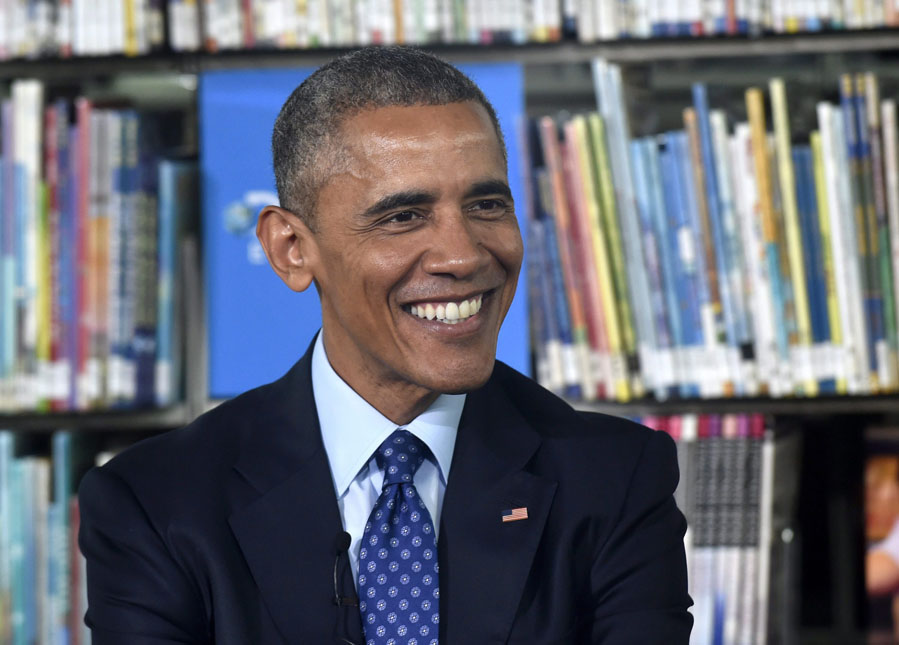 “I think that I found myself better able to imagine what’s going on in the lives of people throughout my presidency because of not just a specific novel but the act of reading fiction. It exercises those muscles, and I think that has been helpful.” — President Barack Obama in a 2017 interview with The New York Times

For bibliophiles, it’s one of the most exciting times of the year — that moment in August when President Barack Obama shares his summer reading list. In a much-anticipated social media post — shared on Facebook and Instagram — Obama, 58, let us know about a “few books” he’s been reading this summer just in case we’re “looking for some suggestions.”

Considering his suggestions have, in the past, included everything from essential classics, such as Herman Melville’s Moby Dick, to books of the moment, like Gillian Flynn’s Gone Girl, it’s safe to say readers are in reputable hands. (By contrast, books suggested by the current president all have a similar, let’s call it narcissistic, bent, from The Faith of Donald J Trump: A Spiritual Biography by David Brody and Scott Lamb to The Case for Trump by Victor Davis Hanson)

And like in previous years, the recommendations put forth by Barack Obama offer a sense of what the former president has on his mind. Below, we read between the lines of his 2019 summer reading recommendations. The Collected Works of Toni Morrison

Not surprisingly, given the celebrated writer’s recent passing, Barack Obama believes you can’t go wrong by starting with reading or re-reading the Nobel and Pulitzer Prize-winning author Toni Morrison‘s collected works, including Beloved, Song of Solomon and The Bluest Eye. “They’re transcendent, all of them,” he writes. “You’ll be glad you read them.” The Nickel Boys by Colson Whitehead

American writer Colson Whitehead is no stranger to these lists, as Obama named his previous novel, The Underground Railroad, as a summer reading pick in 2016. It went on to win the Pulitzer Prize in Fiction and the National Book Award. The Nickel Boys is considered “an essential follow-up” to that novel and was inspired by a real reform school in Florida that operated for 111 years, destroying the lives of thousands of children. It is being hailed as a crucial discourse on historical amnesia and the institutionalized racism in the United States.

Obama himself writes on Facebook: “Sometimes difficult to swallow, The Nickel Boys by Colson Whitehead is a necessary read, detailing the way Jim Crow and mass incarceration tore apart lives and wrought consequences that ripple into today.” Remember Arrival, the hypnotic award-winning movie featuring Amy Adams as a linguist called in to help communicate with the extra-terrestrials when they arrive on Earth? That was based on a short story by Chiang called “Story of Your Life.” The stories in his latest collection similarly blend scientific allure with a refined human sensitivity and soulfulness.

“Exhalation by Ted Chiang is a collection of short stories that will make you think, grapple with big questions, and feel more human,” Obama writes. “The best kind of science fiction.” The Man Booker Prize-winning historical novel about Oliver Cromwell’s rise to power was published in 2009, but Obama says he “was a little busy back then” — not surprising given the epic length of both it and its follow-up, Bringing Up the Bones. It seems it was worth the wait, as Obama calls Wolf Hall, “still great today.”

Mantel’s publisher announced in the spring that the long-awaited third book in the trilogy, The Mirror and the Light will be published in 2020, so hopefully we’ll all be caught up by then. Men Without Women by Haruki Murakami

Bestselling Japanese writer Haruki Murakami is nothing short of a literary rock star, so it’s a bit surprising his name hasn’t appeared on one of these lists before.

This short story collection paints a complicated picture of the dynamics between men and women. As Obama’s recommendation says, “Haruki Murakami’s Men Without Women examines what happens to characters without important women in their lives; it’ll move you and confuse you and sometimes leave you with more questions than answers.” Inspired by true events, American Spy knits together a gripping spy thriller, a heartbreaking family drama, and a passionate romance. The New York Times called it a “murder mystery that offers genuine social insight.” Obama agrees: “American Spy by Lauren Wilkinson is a whole lot more than just a spy thriller, wrapping together the ties of family, of love, and of country.” The Shallows by Nicholas Carr

In 2011, Carr expanded his viral Atlantic feature “Is Google Making Us Stupid?” into this book, The Shallows: What the Internet Is Doing to Our Brains, which was nominated for a Pulitzer Prize.

“The Shallows by Nicholas Carr came out a few years ago, but its arguments on the internet’s impact on our brains, our lives, and our communities are still worthy of reflection,” Obama writes, “which is something we all could use a little more of in this age.” Botanist Hope Jahren’s memoir explores how her lifelong passion for science sustained her in the male-dominated world of the research laboratory.  Reviewers hailed Lab Girl as immediately engrossing and extremely readable.

The memoir also gets pretty high praise from Obama: “Lab Girl by Hope Jahren is a beautifully written memoir about the life of a woman in science, a brilliant friendship, and the profundity of trees. Terrific.” The follow-up to her 2011 bestseller The Tiger’s Wife, Téa Oreht’s new novel reinvents the Western as it follows two characters living in the unsettled American West, with the New York Times noting, “the landscape of the West itself is a character, thrillingly rendered throughout.”

The highly anticipated novel has received much hype in the lead up to its publication, a fact Obama addresses directly: “Inland by Téa Obreht just came out yesterday, so I won’t spoil anything. But those of you who’ve been waiting for Obreht’s next novel won’t be disappointed.” How to Read the Air by Dinaw Mengestu

Mengestu’s first novel, The Beautiful Things That Heaven Bears won numerous literary prizes and was praised for its haunting depiction of the immigrant experience in America. The award-winning author continues with this theme in his latest, How to Read the Air, which follows a man’s journey from New York to Ethiopia to retrace the path of his immigrant parents after his father dies.

“You’ll get a better sense of the complexity and redemption within the American immigrant story with Dinaw Mengestu’s novel, How to Read the Air,” Obama writes. In this bestselling memoir, Land illuminates the struggles of poverty, recounting her experiences working as a maid for upper-middle class Americans. A stark analysis of the disparities between America’s economic classes, Maid has been described as a personal indictment of the policies that govern the lives of the working and lower classes.

“Maid by Stephanie Land is a single mother’s personal, unflinching look at America’s class divide,” Obama writes, “a description of the tightrope many families walk just to get by, and a reminder of the dignity of all work.”

8 Books That Illuminate the Summer of 69

Beach Reads: 13 Books to Transport You to the Sun and Surf