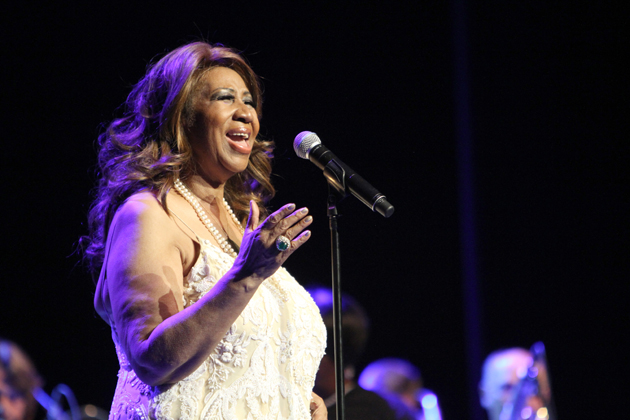 Here, we reflect on The Queen of Soul’s legendary career and revisit some of her greatest performances.

She’s won 18 Grammy Awards, had 73 singles chart on the Billboard Hot 100 list and was the first woman ever inducted into the Rock and Roll Hall of Fame.

With tens of millions of records sold and a career spanning more than 50 years, there’s no denying the lasting influence of Aretha Franklin’s presence on the music scene. From gospel and jazz to R&B and pop, her extensive catalogue boasts an eclectic mix of sounds that span all genres.

Born on March 25, 1942, the fourth of five children born to Baptist preacher Reverend Clarence La Vaughan Franklin and gospel singer Barbara Siggers, Franklin was regarded as a child prodigy early on thanks to her self-taught vocals and piano arrangements. In 1956, after singing in her father’s church choir for years, Franklin’s first album, Songs of Faith, was released by an independent label when she was only 14 years old. That same year, she gave birth to the first of her four sons.

After a brief hiatus, in which she gave birth to her second child at 16, Franklin traveled to New York with the blessings of her family and signed with Columbia Records. Her first album with the label, Aretha, was released in 1961 and served as her introduction to a global audience.

Although two of the tracks from this album would make the R&B Top 10, her biggest success yet would come with the single “Rock-a-Bye Your Baby with a Dixie Melody” which reached No. 37 on the pop charts. But the moderate results of her subsequent singles inspired Franklin to switch to another label, Atlantic, in 1966.

It was during this high point in her career that she hit her stride, releasing a string of singles that would go on to become the enduring classics for which she is known. In 1967, Franklin released the album I Never Loved a Man (The Way I Love You) which featured her iconic cover of the Otis Redding track, “Respect”—and became the unofficial anthem for female empowerment at the time. She won her first two Grammy Awards for the single and continued on a hot streak with Top 10 hits such as “Baby I Love You,” “Think,” “Chain of Fools,” “I Say a Little Prayer,” “(Sweet Sweet Baby) Since You’ve Been Gone” and “(You Make Me Feel Like) A Natural Woman.”

Franklin earned the title Queen of Soul during this period—displaying both her dominance on the music charts and as an inspirational symbol of black empowerment during the civil rights movement. And it was in 1968 that she performed a beautiful rendition of “Precious Lord” at the funeral of Dr. Martin Luther King Jr.

With the advent of disco music in the late-1970s, Franklin experienced a brief lull in her professional career but returned to the top of the charts in 1985 with the pop record, Who’s Zoomin’ Who?, which went on to become her biggest selling album to date.

In 2003, she founded her own label, Aretha Records, which she later used to release her album, A Woman Falling Out of Love in 2011. Franklin was awarded the Presidential Medal of Freedom in 2005 and, in 2009, she sang at the presidential inauguration of Barack Obama.

Although she was forced to stop touring in February 2017 as she battled pancreatic cancer, she refused to let her health issues interfere with her love of making music. Less than a week prior to her death, she was working on a new album with Stevie Wonder.

“I feel very, very enriched and satisfied with respect to where my career came from and where it is now,” she told a Detroit news station after announcing her retirement from touring. “I’ll be pretty much satisfied, but I’m not going to go anywhere and just sit down and do nothing. That wouldn’t be good either.”

Here, we look back at the Queen of Soul’s best live performances in chronological order.

Franklin was only 22 years old when she appeared on a 1964 episode of The Steve Allen Show to sing “Won’t Be Long.” The song, her first single to crack the Billboard Hot 100, was featured on her 1961 album, Aretha: With The Ray Bryant Combo, and gave audiences an intimate glimpse of a talented superstar on the rise.

It was in 1968 that Franklin—who has aviophobia, an intense fear of flying—embarked on her first-ever European tour. And it was this rare footage of her legendary performance in Amsterdam that ultimately cemented her status as the Queen of Soul.

In 1970, she appeared on The Cliff Richard Show with three backup singers to belt out the Dionne Warwick classic, which appeared on Franklin’s 1968 album, Aretha Now.

Her iconic 1971 concert at Fillmore West in San Francisco has long been revered as one of the best live recordings of all time. But it’s her memorable duet with Ray Charles on “Spirit in the Dark” that proved to be the highlight of the night.

During the 1998 Grammy Awards, Franklin stepped up to sing at the last minute in what has come to be known as one of her greatest live performances. Tenor Luciano Pavarotti had cancelled at the last minute due to a throat infection and Franklin, who was given only 20 minutes to prepare before the curtain rose on her performance, gave a stunning rendition (in both English and Italian!) of “Nessun Dorma” from Giacomo Puccini’s opera, Turandot.

Although Franklin’s infamous giant bow became something of a legend in its own right (it spanned a multitude of online memes), her 2009 performance of “My Country, Tis of Thee” at Barack Obama’s 2009 inauguration remains one of the most talked about live acts in her entire repertoire.