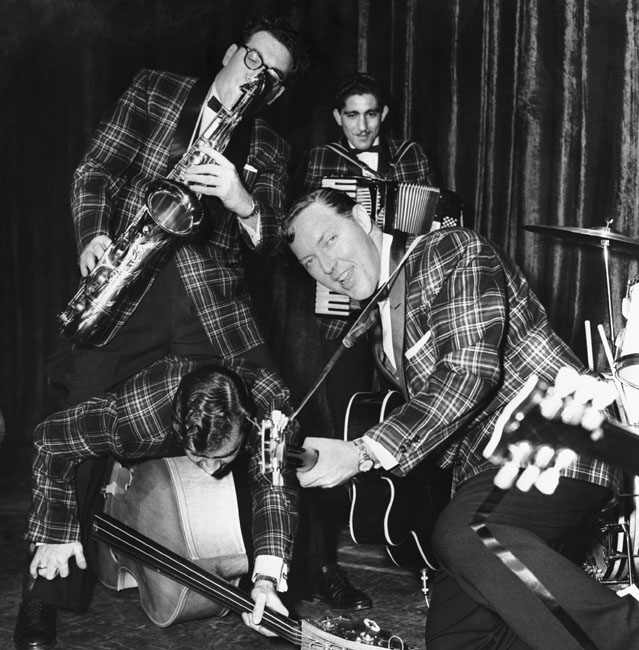 For the sake of argument, let’s call this the 65th birthday of rock ‘n’ roll. In 1954, Bill Haley released “Rock Around the Clock” (causing riots in theatres when it was played during the movie Blackboard Jungle), and Elvis recorded “That’s Alright Mama.”

The musical milestone comes, of course, in the wake of last weekend’s nostalgia-meltdown over Woodstock’s 50th. And while his elders were hail, hailing rock ‘n’ roll, Canada’s own Drake was antagonizing Beatles fans the way he did American basketball fans back in June during the Raptors’ championship run.

RELATED: Drake vs. the Beatles: A New Tattoo Sets Off a Debate Over Who Is Best

It was revealed last week that the biggest selling hip-hop artist in the world had a new tattoo that throws shade on The Beatles, an image of the famed Abbey Road crosswalk on his arm with Drake depicted strutting past the Fab Four and waving at them. The tattoo commemorates the hip hop star’s breaking of three of the Beatles’ Billboard Top 10 chart records and predictably set social media aflame, with the result that Drake took heat for comparing himself to the band that took heat for a comparison to Jesus.

Drake’s cheekiness and provocations either anger or amuse. For the record, I’m among the latter. And in the words of Muhammad Ali, it’s not bragging if you can back it up. It also doesn’t matter if you can’t name any of those Drake songs hitting the Billboard Top 10. Your parents probably couldn’t name a single tune on Rubber Soul. Still, it’s a snapshot of the musical landscape in the year rock ‘n’ roll becomes eligible for Old Age Security.

In 2017, hip hop passed rock to officially became the most listened-to music in the world. In that year, according to Nielsen’s year-end report, eight of the 10 most popular artists were hip hop/R&B, led by, yes, Drake, followed by Kendrick Lamar (the metric the ratings company uses is “total consumption,” meaning the sum total of recording sales, streamed music and radio).

The latter is possibly an even more significant inclusion. Last year, Kendrick Lamar won the Pulitzer Prize for music, something no rock artist ever did (since its inception in 1943, only jazz or classical artists have ever won the music Pulitzer).

RELATED: “Back to the Garden”: Reflecting On Woodstock’s Legacy 50 Years Later

If it’s of any consolation, rock albums dominated the vinyl album chart (yes, they still keep track of this) — specifically, Queen’s Bohemian Rhapsody soundtrack, Queen’s Greatest Hits, the aforementioned Abbey Road, Pink Floyd’s Dark Side of the Moon and Fleetwood Mac’s Rumours. I’d keep an eye out for that Peter Frampton kid, though. He’s an up-and-comer.

None of this bothers me in the least. Rock ‘n’ roll started as a disrespected, underdog genre, which was much of its charm. It’s fine with me if it ages that way.

And in recent years, a new generation of young rockers has sprung up, Imagine Dragons being the top among them, sales wise. I find myself loving songs by The Black Keys, The Killers and Greta Van Fleet (the latter of whom represents maybe the third generation of bands clearly influenced by Led Zeppelin).

And give hip-hop its due for following in the steps of rock ‘n’ roll as an outsider art form that took over the culture. It was born out of anger and fueled by censorship attempts amid the fear that it would corrupt youth and undermine authority. It was sexually suggestive and, at times, even explicit. It was a black medium that had its white crossover stars like Eminem and The Beastie Boys, though none of them reached the culture-appropriating status of Elvis or the Beatles. For all its young white listenership, hip-hop never stopped being African-American at its core. This befits a time when other stories than white ones are finally being told across the culture.

Change is good. I spent much of my life wondering when kids would stop liking their parents’ music, or music that sounded like their parents’ music. I never had the least interest in Glenn Miller or The Mills Brothers (although I kind of like them now).

That nagging feeling hit me early. When I was a 24-year-old music reviewer in Ottawa, I was sent to cover a concert by Black Sabbath (in the Ronnie James Dio era). I’d played the album Paranoid to death when I was 15 — which was the average age of the audience that surrounded me. To quote Matthew McConaughey in Dazed and Confused, “I get older, they stay the same age.”

But that time of musical schism between generations was inevitable.

It seems right that there is current music that is (mostly) outside my demographic bubble like hip hop, or electronic dance music. I will still rock out, even when the kids complain about the noise.