Larry King, 85, Files for Divorce From Wife #7 — But Will He Be Able to Resist Yet Another Nuptial? 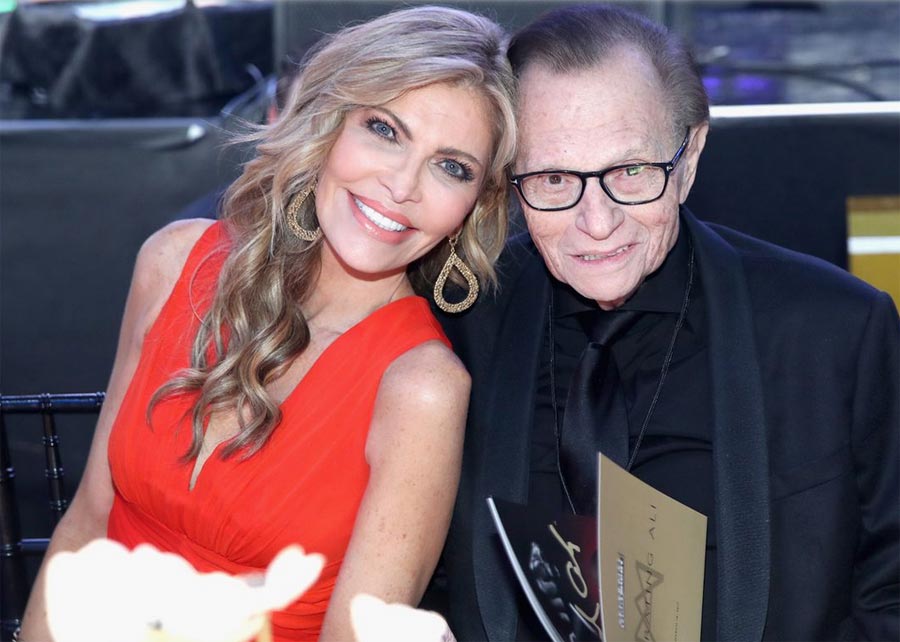 I could use a little extra money — who couldn’t? — so I’m taking bets that Larry King will very soon announce his betrothal to wife #8 — or would she actually be #9, since he was married to the same woman twice.

It’s true that the 85-year-old former TV host has only just announced his divorce from wife #7, 59-year-old Shawn, after 22 years of marriage and two offspring.

But at his age,  there’s not a lot of time to waste.

So it’s a sure bet that he’ll find somebody fast, most likely another Melania-look-alike middle-aged woman with ingenue curls and stretched skin.

King just can’t resist another nuptial. Has he never heard about hooking up? And he never seems to mind the alimony payments that inevitably follow his fantasies of happily ever after.

King has not often been without a spouse or fiancee since he was 18, when he married his high school sweetheart in 1952. That first marriage lasted a year and was annulled because her prescient parents didn’t approve.

The next one lasted less than a year but produced Larry King Jr., now 57, just two years younger than his fifth step-mother (sixth? fourth?).

All in all, he’s been married eight times and has five children. It can’t be easy to remember which kid has which mother. He’s also kidded that this seventh marriage is the only one that’s lasted into two digits.

Nevertheless, he did file for divorce from Shawn twice previously but changed his mind each time. This time, according to several media outlets salivating over the salacious gossip, the couple’s sons encouraged their daddy to do the deed because of mom’s affairs and her attempt to change property rights in her favour.

Reportedly, Shawn had many affairs, including the one the National Enquirer reported in 2010, which led to Larry’s first divorce filing, with her son’s tattooed hunky baseball coach who looks nothing like her frail, shrunken husband. Another adulterous affair ensued in 2016 with a public speaking coach who had famous friends, including Princess Diana.

I’m not making excuses for Shawn’s waywardness, mind you, but it has been noted that Mr. King and Mrs. King have not shared a bedroom for a decade or so.

He’s also had serious health problems, including lung cancer two years ago and angioplasty in April. Apparently it was her husband’s health issues combined with his age that persuaded Shawn to attempt to make legal adjustments to who owned what and where it would go when he went.

Larry King’s net worth is estimated to be $150 million and he was earning around $30 million a year when Larry King Live on CNN was popular in prime time.

And yes, it’s easy to make fun of Larry and his string of spouses and need for nuptials.

But in the end, I think the right thing to do is to congratulate him on ridding himself at this point in his life of whatever is making him miserable.

Less than two years ago, Page Six  reported a source saying that “Shawn went away to Utah two days after Larry had surgery (for lung cancer) …While she was away, Larry was happier than he’s been in years, and his family was really hopeful that he’d really do it (end their marriage) this time… (Also) King began to reflect on his mortality after his cancer scare and the death of his younger brother, Marty Ziegler.

“Larry is at a crossroads,” the source told Page Six. “He’s getting older and thinking, ‘Why do I have to put up with this?’ He’s been miserable for a decade.”

I sincerely hope he now gets to enjoy a decade of happiness.

And I also hope I lose my bet about him getting married again.