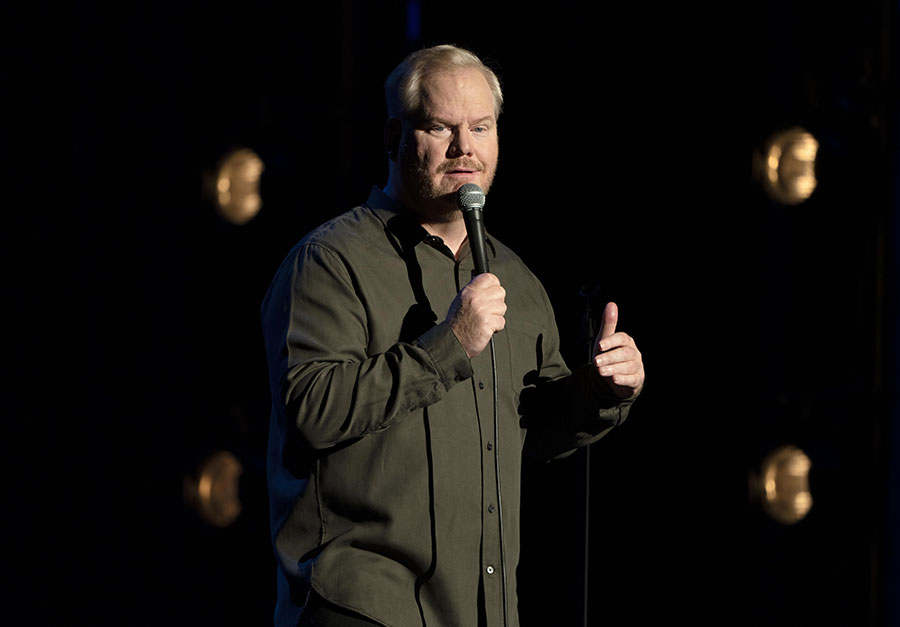 Even after 30-plus years covering comedy, I can be caught off-guard by the difference between a comic’s persona and offstage self.

Jim Gaffigan, the patron saint of the dad-bod, greets me at a Toronto hotel room wearing a crisp navy blazer, with his shirt properly tucked.

This shouldn’t be a surprise, but for the opening of his debut Amazon Prime Video special Quality Time, in which he expounds on his decision to perform with his XXL shirt untucked. As he puts it, it’s the fat man’s last stop before a muumuu.

“This is what I look like. It’s mostly my fault,” he says to the audience, by way of hello. He’s got two lines in the show where talking animals comment on how he looks like the late, portly Philip Seymour Hoffman.

I point out that I’ve worn a short-sleeved shirt untucked on this warm summer day just for him, and I joke that this interview is obviously off to a bad start. (It isn’t, of course. I’ve talked to Gaffigan before, and he’s a gracious interview.)

And though every fan has some Gaffiganism they key on, the comic himself embraces change.

“I start out talking about my weight, because when it’s what you’re known for, it’s going to resonate. But I removed a lot of the food material in Quality Time. I only really talk about food when I talk about French cheese.”

He also puts a limit on how much material he does about his family — a hard thing to limit, since he and his wife/creative partner Jeannie have five children.

“I could talk about my kids forever but I’ve been that single person without kids listening to some comic talk on and on about their kids. So, I’m very selective about what I bring to the set.

“You have to keep moving and writing. I have all this material I’ve amassed over the years, that you always think, ‘this is going to be the thing people remember.’ And then there’s always some drunk guy yelling ‘Hot Pockets!,’ and you’re like, ‘Really? It’s just that?’”

Ah, Hot Pockets. There was a time when he became so identified with his material about his addiction to the microwavable faux-panzerotto, you’d have sworn he was a company spokesman. He knew he had to bury that bit one day when he was interviewed on CNN. “It was Labour Day weekend, I was talking about veterans and how a dollar of every five dollars from my new special was being given to help veterans. And they identified me onscreen as Jim ‘Hot Pockets’ Gaffigan.”

The fear of being tied down to a “bit” leads him to constantly experiment. In Quality Time (Amazon’s first-ever standup comedy special), he experiments/messes with the audience to see if he can tell 10-plus minutes of horse jokes (pausing every so often in his high-pitched “inside voice” to comment on how long the bit is going on). The meta-joke-telling is hilarious. And he dips into more personal revelations. His previous special, Noble Ape, saw him visit Jeannie’s near-death experience; a large, ultimately benign brain tumour that was, nonetheless, life-threatening to remove.

And in Quality Time, he squeezes laughs out of a bursting appendix that afflicted him while his family was roughing it in Alaska (where, among other things, they encountered an aggressive bear). He had to be flown to a hospital by helicopter.

Having a large family, with a wife who’s your work partner, has had its rough patches. They pulled the plug on their reality-based sitcom The Jim Gaffigan Show after two seasons.

“Essentially my wife and I wrote all the episodes. She was the show runner, and we said, ‘We can’t do this anymore, we have five kids.’

“So, we stopped doing the show and then we discovered she had a brain tumour. It was a good thing we stopped, because she would never have gone to a doctor if we were still working all the time.”

Meanwhile, Gaffigan has pursued a non-comedic film career that has been critically rewarding. Two of his films have played the Toronto International Film Festival, Chappaquiddick (starring Jason Clarke as the scandalized Ted Kennedy) and The Bleeder (with Liev Schreiber as Chuck Wepner, the Jersey boxer known as The Bayonne Bleeder.

He had high hopes for another TIFF appearance with the Canadian film Gut Instinct, in which Josh Hartnett plays real-life investigative reporter Victor Malarek, who unraveled the case of a young Canadian imprisoned in Thailand for drug trafficking. Gaffigan, “played a bad dude in that.”

Next year, you’ll see him play electrical industry pioneer George Westinghouse opposite Ethan Hawke as the inventor Nikola Tesla in the movie Tesla.

“It’s very selective in that my primary thing is being a comedian. But if the right acting opportunity comes around, I’m all over it. So, it’s a juggling act. You do four days on a movie and three days doing stand-up.”

He’d been up at 5:30 a.m. to do interviews on Canadian morning shows. And I’d later discover that Gaffigan still had the energy to do a surprise set at the weekly AltDOT Comedy Lounge at the Rivoli in Toronto’s Queen St. West village.

“I like the opportunity to do shows in new places,” he says. “I’ve got shows in January and February in parts of Canada that are really kind of off the beaten path from where I’ve been.” He names Lethbridge, Moncton and both Saint John and St. John’s.

The latter makes me laugh, because he has a routine in his show about how he keeps playing cities where they say, “You really should see it in the summer.”

“But,” he says when I point out the irony, “if I went there during the summer, people would say, ‘We’re not going inside. Are you kidding? It’s finally nice out.’”