12 Famous and Lovable Dogs From Movies and TV 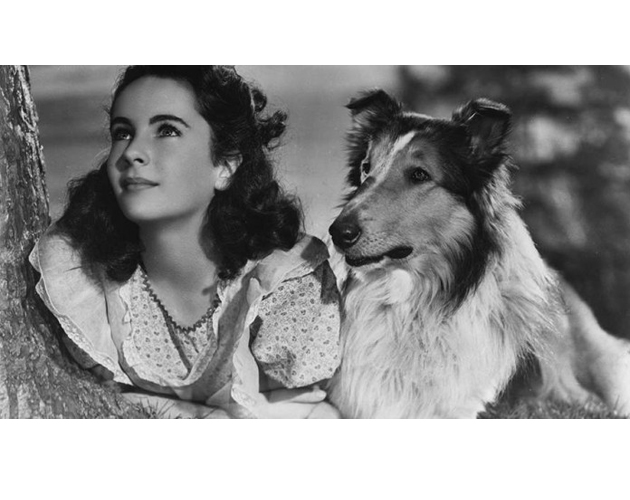 They’re some of the most famous pooches on the planet! Here, a nostalgic look at our favourite canine superstars from the silver screen.

Canine superstars—it’s a thing! These famous dogs caught their big breaks on the silver screen and went on to become just as recognizable and beloved as their human costars. And, although some of them have since passed away, they remain a sort of historic figurehead for their respective breeds.

Arguably the most famous canine character of all time, Lassie was a female Rough Collie and appeared in a series of short stories, TV shows and films, the most famous of which was Lassie Come Home, starring Elizabeth Taylor and Roddy McDowell. Lassie represented “courage, honour and unshakeable loyalty” and selflessly put herself in dangerous situations to save her human friends. Despite the fact that Lassie is a female character, the majority of the time she’s been played by male dog actors. The reason? Male Rough Collie dogs have thicker and more aesthetically pleasing coats. Toto, the faithful little companion of Judy Garland’s heroine Dorothy, was actually a female Cairn Terrier named Terry. At the time of filming, Terry was paid a $125 weekly salary—an astronomical sum for its time. In fact, it was more money than most of the human actors made. Although Oz was her most memorable role, Terry went on to act in at least 13 other feature films. She died in 1945 and was buried on a farm. Nicknamed Rinty by his human costars, Rin Tin Tin was a German Shepherd featured in a series of Adventures of Rin Tin Tin films starting in 1923. Corporal Lee Duncan, an aerial gunner in the U.S. Army Air Service, rescued Rin Tin Tin from a damaged kennel while stationed in France in 1918. When the pair arrived in the States, Duncan tried to find film work for his new pet after discovering the pup could jump great heights. Rinty’s big break came with Where the North Begins and he went on to star in 24 more feature films. In 1929, he was nominated for an Oscar for Best Actor but was later pulled from competition after it became apparent, based on the vote tally, that he would end up actually winning. Rin Tin Tin died in 1932 at Duncan’s home in Los Angeles. Later known as The Little Rascals, Our Gang was an immensely popular series of films screened throughout the 1930s. At its centre was Pete the Pup (aka. Petey), a character originally played by an American Staffordshire Terrier named Pal the Wonder Dog. Pete the Pup’s most distinctive feature was the ring around his right eye—a mark that Pal the Wonder Dog was born with and was incorporated into the show. When Pal died in 1930, his replacement as Pete the Pup was his own offspring, named Lucenay’s Peter, and all the subsequent dog actors after Pal had the circle drawn around the right eye with makeup. This canine hero was a slobbery, droopy-faced—but lovable!—St. Bernard dog, who had a knack for getting his human family into mischief. Written under a pseudonym by John Hughes, the original film, starring Charles Grodin and Bonnie Hunt, was an instant early-90s children’s classic and generated a lot of public interest in the St. Bernard breed. Chris the Dog starred in Beethoven and Beethoven’s 2nd and worked closely with respected animal trainer Karl Lewis Miller. Chris was later replaced by other dog actors in the direct-to-video sequels after passing away shortly after filming was completed on Beethoven’s 2nd in 1993. This lovable, brave, black and tan mixed breed dog was originally played by a pup named Higgins in the 1974 film Benji. Higgins had a successful 14-year show business career—he also appeared as “Dog” in the 1960s sitcom Petticoat Junction. Animal trainer Frank Inn discovered Higgins in a Los Angeles shelter and was drawn to the dog’s wide range of emotions and facial expressions. It seemed he was destined for Hollywood. When Higgins died in 1975, the role of Benji went to his offspring, Benjean. This tragic tale of a young Texas boy and his Labrador Retriever/Mastiff mix is arguably the most heartbreaking canine film to date. Based on the 1956 children’s novel by Fred Gipson, Old Yeller captures the heartbreaking sense of loss that comes when a beloved pet is suddenly taken away. This iconic role was played by Spike, a rescue dog raised by animal trainer Frank Weatherwax. He went on to appear in a handful of other films and TV series, including a spot on Lassie (aired 1954-1973). While you may not be too familiar with this popular Canadian/American film franchise, your grandkids have almost certainly seen one or two of them. Although it was a direct-to-video release in 1997, Air Bud was a huge success and spawned multiple sequels. The Golden Retriever was originally played by Buddy—the inspiration behind the film itself. Buddy was discovered in the Sierra Nevada mountains and the stray dog was brought to San Diego where his trainer Kevin di Cicco taught him to play basketball, baseball, football, soccer, hockey and chess. His first appearances were on America’s Funniest Home Videos, Late Show with David Letterman and special appearances on Full House. Sadly, Buddy passed away in 1998 of cancer. For dog lovers, Comet was considered the best member in the Tanner family clan. And it’s easy to understand why: the Golden Retriever had a knack for stealing scenes with his comic timing. At the time the series first aired, Buddy, the dog actor who played Comet, was well on his way toward stardom—he’s the same pooch who played the original Air Bud! This late-80s classic stars Tom Hanks and a Dogue de Bordeaux named Beasley. The unlikely pair—Hanks is a detective on a high-profile murder case and Hooch is his only witness to the crime—form a strong bond in this charming comedy caper. Beasley was born in a Wisconsin dog kennel where he was purchased by trainer Clint Rowe. This would be Beasley’s only film appearance. He died in 1992. Moose, a Parson Russell Terrier, didn’t have an easy start to life. Born in 1990, he was “too much” for his original owner to handle, resulting in his surrender to a company that trained animals for film and television appearances. After only six months of training, he got his break: the rambunctious pup was cast on the hit show Frasier, performing as the beloved dog Eddie. Producers on the show claimed Eddie received more fan mail than his human costars. After the series went off the air, Moose retired. He died in 2006 after a battle with dementia. Marley is arguably one of today’s most popular canine characters. Maybe it’s because he feels so real—like he was our own pup. Based on the memoir by John Grogan, the movie revolves around a young couple (Owen Wilson and Jennifer Aniston) who are new to the world of dog parenting. What they experience is almost exactly relatable to what most dog parents go through in the early years. Due to the fact that the film spans 14 years, 22 yellow Labrador Retrievers were used during filming. Marley & Me struck a nerve with audiences, and the charming tearjerker earned more than $245 million at the box office.