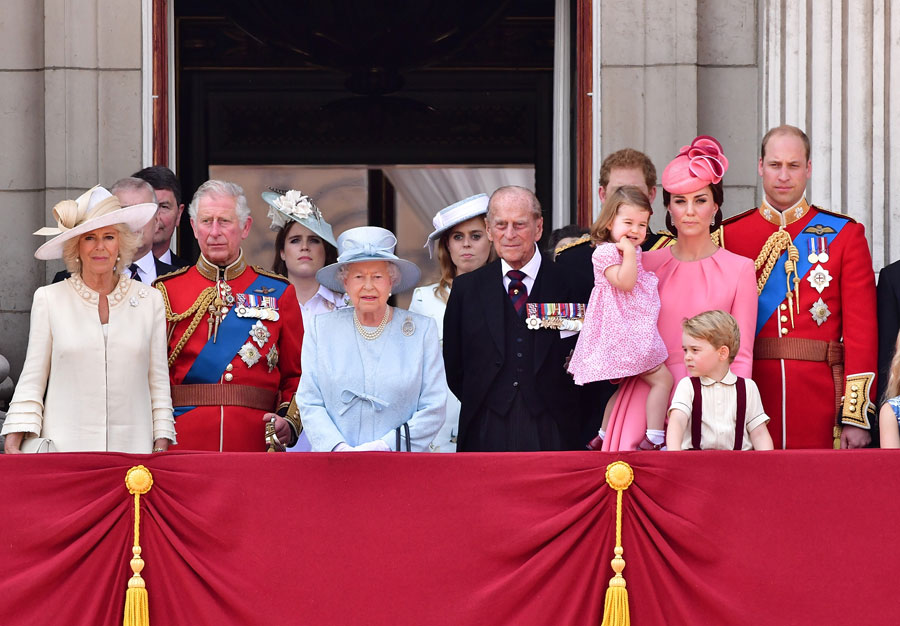 Love them or not, the royal family continues to capture international attention. We welcome any invitation to catch a glimpse of them, be it at a public event or among the pages of our favourite magazines. Whether we’re cooing over the adorable Princess Charlotte or (still) feeling torn about the nuptials of Charles and Camilla, we can’t help but get pulled into their extraordinary lives.

Royals are the ultimate celebrities, born into a life of luxury and public service — a role in which they had little say in the matter. As the 33-year-old Prince Harry recently put it: “Is there any one of the royal family who wants to be king or queen? I don’t think so, but we will carry out our duties at the right time.”

So, how do the royals really feel about their role in society? What are their fears, hopes and dreams? What goes on behind closed doors at royal residences like Buckingham Palace or Clarence House? We grasp at what little information is afforded us from TV interviews and magazines — and we turn to biographies written by renowned royal historians in the hopes of gleaning something new.

The younger royals — Princes William and Harry and Catherine, Duchess of Cambridge and Meghan, Duchess of Sussex — are drawing back the curtain on their family’s previously shuttered lives in effort to be more relatable to the masses. The four appear frequently in public and speak openly about their individual battles with mental health in an effort to raise awareness. “We are involved in modernizing the British monarchy,” Harry says. “We are not doing this for ourselves but for the greater good of the people.”

It appears to be working: At the moment, William, Harry, Kate and Meghan are arguably the most popular members of the royal family — overshadowed only by the charming antics of five-year-old George, three-year-old Charlotte and baby Louis. Yet so much remains shrouded in mystery.

Here, we look at some of the all-time best (and most revealing) royal biographies written about members of the House of Windsor.

Must-Read Book: The Royals by Kitty Kelley
Buy It Here: Amazon
This exhaustively researched history of the House of Windsor (containing a whopping 1,000+ interview subjects) pulls back the curtain on one of the world’s most secretive families, sharing revealing anecdotes concerning isolation, jealousy, gambling, alcoholism and womanizing. Originally published in 1997, The Royals is the perfect way to brush up on the abdication of King Edward VIII, the reign of King George VI and Queen Elizabeth’s ascension to the throne in 1952.

Must-Read Book: Queen Elizabeth, The Queen Mother by William Shawcross
Buy It Here: Amazon
The life of Elizabeth Bowes-Lyon (aka. the Queen Mum) spanned the whole of the 20th century. Born in 1900, this remarkable woman went on to represent her nation during its best and worst moments, even throughout her widowhood. Author William Shawcross draws on her personal correspondence and other unpublished materials from the Royal Archives in order to paint a vivid portrait of a woman who tackled adversity with wit and bravado. It remains the definitive biography of the Queen Mum.

Must-Read Book: The Reluctant King: The Life and Reign of George VI (1895-1952) by Sarah Bradford
Buy It Here: Amazon

When his older brother, King Edward VIII, abdicated to marry American socialite Wallis Simpson, George VI (incredibly reluctantly) assumed throne at crucial time in history and formed a “great wartime partnership” with Winston Churchill. Yet George remains a somewhat tragic figure: almost painfully shy (with a stutter that had to be corrected) and uncomfortable with the notion of leading a nation, his reign took a toll on his health. A longtime smoker, he ultimately succumbed to a blood clot in his heart (hastened by his battle with lung cancer) at the age of 56. Often overshadowed by more flamboyant members of the Royal Family, interest in George VI’s reign has been renewed recently thanks to the Oscar-winning The King’s Speech and Netflix’s The Crown.

Must-Read Book: Elizabeth the Queen: The Life of a Modern Monarch by Sally Bedell Smith
Buy It Here: Amazon
Published in 2012, this nearly-1,000 page tome landed on the New York Times bestsellers list, and rightfully so! Author Sally Bedell Smith introduces readers to the young princess who suddenly became “heiress presumptive” when her uncle, King Edward VIII, abdicated the throne. This thoroughly researched biography — complete with first-person accounts — chronicles Her Majesty’s extraordinary life throughout the Second World War, the birth of her children and the controversy that swirled around her response to Princess Diana’s death.

Must-Read Book: Queen Elizabeth II: Her Life in Our Times by Sarah Bradford
Buy It Here: Amazon
It would seem that 2012 was a big year for biographies about Her Majesty! Cited by many as the definitive biography of the queen, Her Life in Our Times follows Queen Elizabeth through the tumultuous ups and downs of both her personal and professional life. From her uncle’s abdication to the terrors of the Blitz to the scandalous swinging ’60s and Princess Diana’s death, esteemed royal biographer Sarah Bradford puts Elizabeth’s reign under the microscope — and we come out the other end feeling as though we know her better.

Must-Read Book: Philip and Elizabeth: Portrait of a Marriage by Gyles Brandreth
Buy It Here: Amazon
Unique in that it’s the first biography that focuses solely on the relationship between Queen Elizabeth and Philip, Duke of Edinburgh, Portrait of a Marriage goes behind closed doors to reveal the inner workings of a royal union. Author Gyles Brandreth sprinkles his book with first-hand anecdotes from the royals themselves — he’s personally known the Duke for more than 25 years, so you know you’re in good hands with this biography.

Although this fascinating biography is currently out of print, it’s worth buying second-hand or picking up at your local library. The former Princess of Wales remains under intense public scrutiny, even in death. But critically acclaimed royal biographer Sarah Bradford casts aside malicious tabloid rumours and conspiracy theories to get at the truth behind one of the 20th centuries most revered women.

Initially, Paul Burrell caught a lot of flack for his seemingly tasteless attempt to capitalize on the death of his former employer. As butler and close confidante to the former Princess of Wales, Burrell published this account in an attempt to clear his own name from accusations of theft. However, A Royal Duty proves to be a compelling read, pulling us into the complexities of the Royal Family and revealing the sad truth behind some of Diana’s darker moments from a person who was there to witness it.

Must-Read Book: Diana: Her True Story — In Her Own Words by Andrew Morton
Buy It Here: Amazon
Originally published in 1992, this biography has since been updated with additional details about the fallout from her divorce from Prince Charles and her own tragic demise in 1997. What makes this book so extraordinary, however, is how much of what is written comes from Diana’s own words. Journalist Andrew Morton had almost unprecedented access to the former Princess of Wales who, at the time of the book’s original publication, seemed more than willing to open up and bare her soul. In Her Own Words is the definition of a royal page-turner.

Must-Read Book: Prince Charles: The Passions and Paradoxes of an Improbable Life by Sally Bedell Smith
Buy It Here: Amazon
Released in April 2017, this biography on the Prince of Wales was an almost instant bestseller. And for good reason: celebrated royal historian Sally Bedell Smith uncovers previously unknown interactions between Charles and his loved ones. Read about some of the books juiciest revelations here: Prince Charles’ Less-Than-Fairytale Life Revealed in Dishy New Book.

Must-Read Book: Charles & Camilla: Portrait of a Love Affair by Gyles Brandreth
Buy It Here: Amazon
What are Charles and Camilla like outside of the spotlight? Cloaked in intrigue since word first broke of their affair and subsequent marriage, author Gyles Brandreth (who has met all the key characters in the drama and also wrote a revealing book on the relationship of Queen Elizabeth and the Duke of Edinburgh) attempts to humanize two of the most divisive members of the House of Windsor. Love them or hate them, there’s no denying the compelling hold they have on the public imagination.

For those interested in … Prince William and Prince Harry — and new royal, Meghan Markle

Must-Read Book: Prince William: The Man Who Will Be King by Penny Junor
Buy It Here: Amazon

Written in 2001, this biography doesn’t include details on his relationship with Kate Middleton or the birth of his children, but it doesn’t make The Man Who Will Be King any less compelling of a read. From the loss of his beloved mother to his exposure on official royal tours, author Penny Junor leaves no stone unturned and has a good sense of the man behind the crown — and, boy, is he interesting!

Must-Read Book: Prince Harry: Brother, Soldier, Son by Penny Junor
Buy It Here: Amazon
Those looking for juicy details about Prince Harry’s relationship with former actress Meghan Markle or his public work to raise awareness for mental health issues will have to look elsewhere: Brother, Soldier, Son was written in 2014. However, despite these omissions, this definitive biography on Charles and Diana’s younger son still makes for a compelling read. Just as she illustrated with her biography on his brother, William, author Penny Junor undeniably has a finger on the royal pulse.

Must-Read Book: Prince Harry: Life, Loss and Love by Katie Nicoll
Buy It Here: Amazon
On the eve of his May 2018 nuptials to Meghan Markle, royal correspondent Katie Nicoll released what critics have called “the most intimate and informative portrait yet of Prince Harry.” Granted, it won’t have behind-the-scenes details of the Royal Wedding or Harry’s private life at Kensington Palace with Meghan, but for those won over by the love struck couple du jour, this book will satisfy your curiosity about the trials and tribulations they endured in the early days of their relationship.

Must-Read Book: Meghan: A Hollywood Princess by Andrew Morton
Buy It Here: Amazon
From the man who gave us an insider’s glimpse into the life — and death — of the Princess of Wales in Diana: Her True Story, comes the first biography ever written on the newest member of the House of Windsor. Meghan Markle wasn’t exactly known outside of the small, yet loyal, fanbase of the legal drama, Suits. That is, until she met Harry and catapulted to instant fame. Learn about Meghan’s humble origins growing up in Los Angeles and find out how she won the heart of the world’s most eligible bachelor.