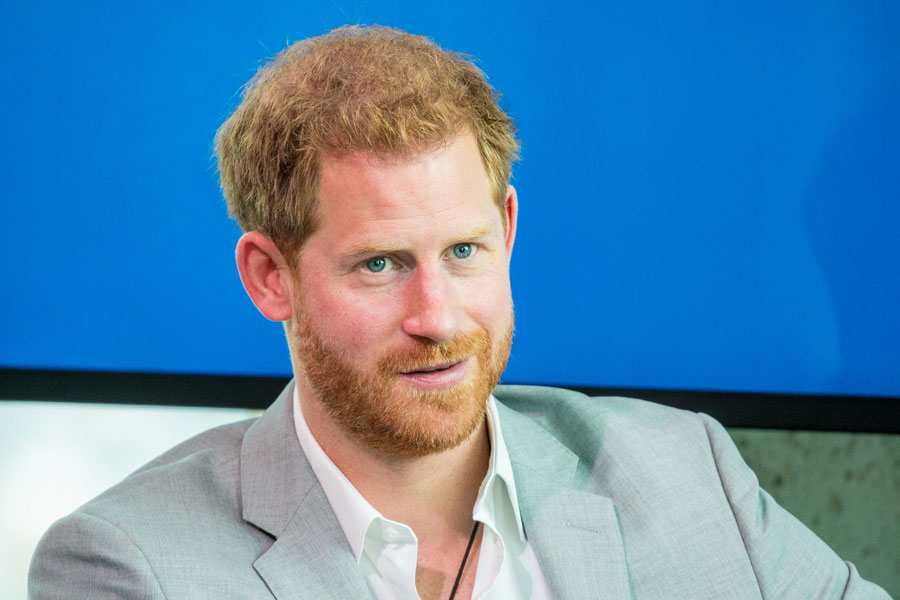 Prince Harry attends an event to announce a new partnership between Booking.com, SkyScanner, CTrip, TripAdvisor and Visa, at the ADAM Tower in Amsterdam. (Photo: Shutterstock))

The boarding passes of the Royal Family have been under intense scrutiny this summer, in particular those of the Duke and Duchess of Sussex, and their tiny traveller Archie Mountbatten-Windsor. The new family was rabidly skewered in the tabloids this past month for taking a series of private flights for vacations, first to Ibiza and then later the same week to the South of France. Celebrity pals from Elton John (their Nice host and private jet benefactor) to Ellen were quick to pipe up in defence of the couple, and their carbon footprints.

Well, this week Prince Harry just scooped up all that negative attention like so much dog doo-doo, and used his spotlight to redirect the conversation. In a very smooth move, the now 6th in line to the throne teamed up with international online travel companies in a campaign called Travalyst, with the goal of transforming the industry and consumer’s international travel habits. Some of the key partners include power players such as Visa, Skyscanner and Booking.com.

Prince Harry took a commercial flight to the Netherlands for the announcement, and took the summer’s criticism on the chin, saying “no one is perfect.” He also emphasized that “90 percent” of the flights he takes for work and pleasure are commercial. And that the private planes in question this summer were strictly for the safety of his young family, who are under such intense media scrutiny, especially since the baby was born.

The environmental costs of travel are a huge issue, and one that gets little to no attention. From the little plastic shampoo bottles in hotel rooms on up to the mega-tonnes of fossil fuel burned on the 45 million flights recorded worldwide last year (that’s nearly 4.5 billion passengers, all tolled.) All of us are leaving footprints all over the globe.

And jet-setting celebrities can make a huge difference, in terms of influencing attitudes. Look at the uproar when Kanye West and Kim Kardashian hired a nearly empty 747 to ferry them for an art safari to Tokyo last year? Or our own Drake, whose new Air Drake flying tour bus (in partnership with Cargojet), is a reconfigured 767 cargo plane. And the fuss around Harry’s fancy air miles began when he was ferried to the Google climate summit, called Google Camp, earlier this summer in Sicily by private jet, staying on a gas guzzling super-yacht. He was not unique — Barack Obama, Leo DiCaprio, the Dillers and Katy Perry were all guilty of carbon-heavy travel arrangements for the climate powwow.

Optics matter, though, as proved when Prince Harry’s brother’s family flew not just commercial, but budget commercial, to visit their grandmother in Scotland at Balmoral Castle. This was positioned in the popular British press as a thumb to the nose to Harry and Meghan, though it wasn’t an unusual or diabolically planned move. Though things got murkier when it turned out the budget airline (Flybe) that the Cambridge crew bought cut-rate tickets from actually took advantage of the Royal publicity opportunity by flying an empty plane with the logo they wanted to appear in paparazzi shots on it. Talk about stomping on a well-laid carbon footprint! The fam took Loganair on the return leg of their Aberdeen to Norwich flight in time for the school start for the kiddos. Royals: they can’t win for trying sometimes.

The timing of Prince Harry’s announcement is either brilliant or awkward, depending on who is doing the twisting of the take on things. But in fact, Harry has been a part of the development of this initiative for three years now. The focus is on environmental protection of sensitive sites, while simultaneously boosting the benefits of tourism to local communities.

Following the announcement, Prince Harry posted a message to the Sussex Royal Instagram account offering more details and insights into the why and how of the initiative. He begins by saying that while the problems of climate change can seem vast and overwhelming, that it still matters to try to make change on an individual level. And that since he has a platform, he is trying to use it for good. To that end, the players he has assembled for Travalyst “have sufficient influence and the critical mass necessary to catalyze real system change in the travel industry, for the benefit of destinations, communities and ecosystems.”

It is satisfying to see a Royal so directly address a criticism — this one hypocrisy — levelled at him. Prince Harry, with his admission that everyone can do better, himself included, brings to mind his mother’s greatest talents. The late Princess Diana, renowned for being a goodwill ambassador fearlessly travelling to landmine zones and AIDS hospitals the world over, managed to bridge the obstacles of her couture wardrobe and bubble of privilege to connect directly with real people, and real issues and affect real change.

This private jet watch — which has now been shortened to the playful acronym PJ online — will no doubt continue. And it may in fact do some good in the long run, bringing awareness of the cost of flying around the world on a whim —whatever one’s particular luxury quotient — as Harry and Meghan and tiny Archie plan to do when they set off on their Royal tour of South Africa later this month.