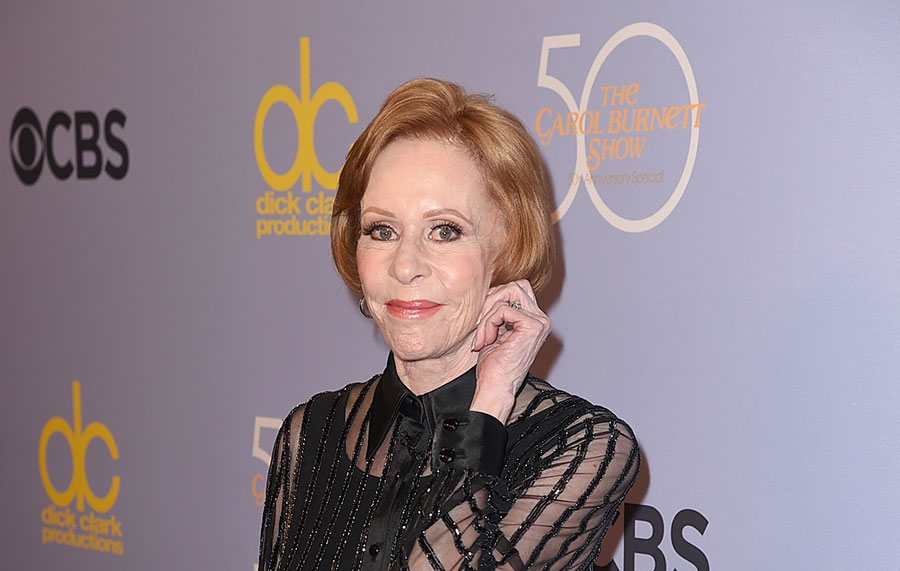 The phone rang one recent afternoon at work and, I reached across my desk to answer with a routine, “Hello, Mike speaking.” From the other end came a cheery, most delightful greeting: “Hi Mike, it’s Carol Burnett calling! I’m sorry I’m a few minutes late.”

I paused, taking stock of this impossibly surreal situation.

Not only is Carol Burnett calling me on the phone, but she’s apologizing for calling a few minutes late. As if I might say, “I’m sorry, Carol, but this is simply unacceptable.”

But that, I quickly learned, is who Carol Burnett is — thoughtful, kind, hilarious  and, at 86, brimming with a sense of vitality and enthusiasm usually associated with someone young enough to be her grandchild.

Fans got a glimpse of it at the 2019 Golden Globes in January, when she was honoured as the first recipient of the inaugural Carol Burnett Award — a television lifetime achievement honour equivalent to film’s Cecil B. DeMille Award.

Actor Steve Carell introduced her as “the most decorated person of all time in the Golden Globes television category,” before listing some of her countless accolades: the first woman to win both the Mark Twain Prize for Humor and the Kennedy Center Honor,  the first woman to host a variety sketch show on TV (The Carol Burnett Show, which ran for 11 years and received 25 Emmy Awards) and , of course, a person of immense kindness.

Burnett then took the stage, beaming and energetic. “Sometimes I catch myself daydreaming about being young again and doing it all over, and then I bring myself up short when I realize how incredibly fortunate I was to be there at the right time.”

It’s the legacy she created with The Carol Burnett Show that lead her to her latest touring gig, a live show called Carol Burnett: An Evening of Laughter and Reflection, which lands at Toronto’s Meridian Hall on Sept. 26. The show, a crown jewel in this year’s Just for Laughs Festival, is a version of a stage show the TV legend has toured for the last quarter of a century, interspersing questions from the audience with clips from her famed television series.

“It keeps me young, and it keeps the old grey matter ticking,” Burnett laughs when asked why she still enjoys touring and meeting fans. “There’s no pre-planned question, no plants or anything. I have to really be on my toes because I can’t think about what I did yesterday or what I’m going to do tomorrow. I have to be in the present moment so that I can engage with the person who’s asking a question. And so that keeps my brain working, and I think that’s important.”

The other reason she continues with live performances is simply because it’s fun. “And that’s important at my age,” she adds, “to get up and go out and have fun.”

Burnett also notes that reruns of The Carol Burnett Show, clips of the sketches on YouTube and DVD sales of the series have helped her build an audience base that skews from age eight to 80.

She recalls how, during her stage show a few years back, a nine-year-old boy in the audience raised his hand to ask a question. “And I said, ‘You know who I am?’ And there was a pause, and he said, ‘Surprisingly, yes,’” Burnett laughs. “It was the cutest. The audience went nuts.”

And isn’t that the ultimate compliment for a comedian, to know that their work stands up decades after delivering that first punchline? For Burnett, the fact that audiences still come out to see her — and that new generations are drawn to her work — serve as validation. “I dare anybody,” she says, proudly, “to watch Tim [Conway] and Harvey [Korman] do the dentist sketch and not lose it. And that’s 45 years old.”

But Burnett’s enduring legacy extends beyond punchlines. In a fractured social and political climate, the Conway/Korman sketch or the famed “Went with the Wind” parody, featuring Burnett channelling Vivien Leigh’s Scarlet O’Hara in a dress made from a curtain (including the rod), resonates as much for their comedic value as for their simplicity and timelessness.

“I think part of that was because we never were that topical,” Burnett says. “We just went for the funny bone.”

That instinct remains. In 2018, she debuted the Netflix series A Little Help With Carol Burnett, where she gets laughs by talking to a panel of kids to get advice for adults, including celebrities, about their problems. In addition, she appears in the upcoming Netflix film Sorta Like a Rock Star, about an optimistic and charitable teenager who is shaken by a personal loss.

“It’s a very sweet story featuring a young girl and her relationship with her mother and different people, and then her relationship with me. I’m a woman in a retirement community who has a very important role in her life,” Burnett adds about the part. “It’s a couple of days’ work, which is cool. But it’s a good cameo part that I think I can have fun with.”

All of which brings up a question: With her legacy firmly intact — she has a lifetime achievement award named after her — what more could Carol Burnett want to accomplish?

“Just to keep on trucking. You know, that’s a good goal,” she says. When I ask how she stays healthy and fit, she credits physically activity. “I’m on the treadmill a half hour every day … Walking is good for you. And I do crossword puzzles, so that’s an exercise for the brain. And, in general, I’m a happy camper and grateful.”

When it comes to Carol Burnett: An Evening of Laughter and Reflection, audiences throughout the years have proven that no inquiry is too ridiculous. Take, for example, one audience member at a show in Texas a decade ago who asked, “If you could be a member of the opposite sex for 24 hours and then pop back into being yourself again, who would you be and what would you do?”

“The audience went, ‘Woo’ and I’m thinking, ‘Okay…’,” Burnett recalls. “And I said a prayer. I said, ‘Okay Lord, I’m going to open my mouth and whatever comes out is your fault.’ I swear I didn’t know I was going to say this until I opened my mouth. Ten years ago, I said ‘I’d be Osama bin Laden and I’d kill myself.’ And the audience went crazy. And I just said, ‘Thank you, God. That was a good answer.’”

With that in mind, what message does Burnett have for fans coming to her live show in Toronto?

Carol Burnett: An Evening of Laughter and Reflection takes place on Thursday, Sept. 26, 2019 at the Meridian Hall (formerly the Sony Centre) in Toronto. Click here for more information and to purchase tickets.