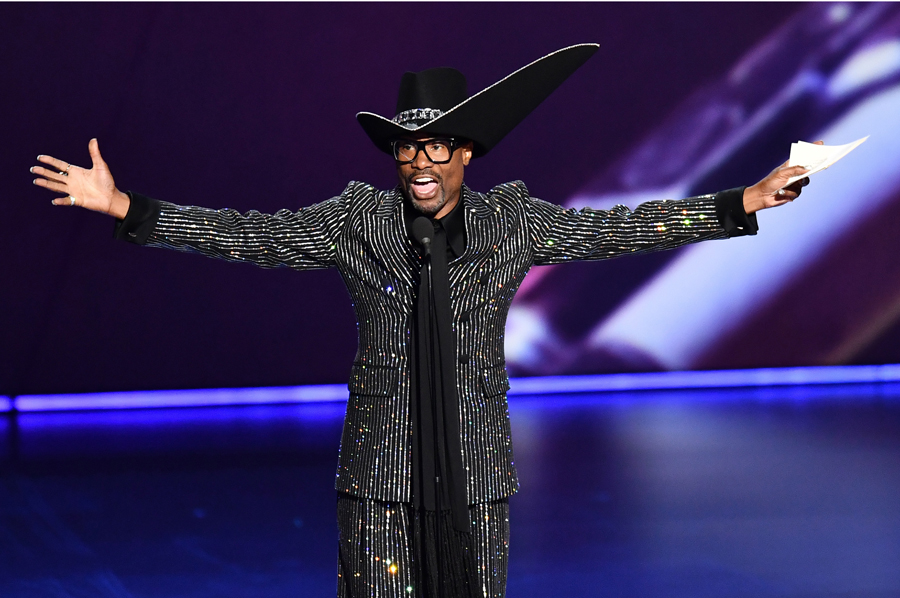 Billy Porter, who turned 50 the day before the Emmys, takes the stage to accept his history-making Emmy. Photo by Michael Buckner/Variety/Shutterstock

While the British series Fleabag, which won four Emmys, including Outstanding Comedy Series, proved the big winner at the 71st Emmy Awards (followed by the historical miniseries Chernobyl, which nabbed three, including Outstanding Limited Series, and Game of Thrones, which was largely shut out but did win Outstanding Drama Series), the most buzzworthy aspects of the evening came with the speeches and performances. From the return of Bob Newhart at age 90 to Billy Porter’s historic win, our favourite quotable 2019 Emmys moments include:

The first ever host-less Emmys kicked off with Bryan Cranston, 63, delivering a monologue about how television transports viewers to faraway places, beginning with the broadcast 50 years ago of the moon landing and concluding with locales from Winterfell (Game of Thrones) to Albuquerque (Breaking Bad and Better Call Saul).

Ben Stiller, 53, continued the theme of television history, discussing legends of TV past while flanked by creepy wax statues of the likes of George Burns and Lucille Ball. But when he reached the wax statue of Bob Newhart, it turned out to be the star himself, who clearly hasn’t lost a comic step since turning 90 a few weeks back.

“Ben, I’m still alive,” he quipped in his famed dry tenor, before adding, “This legend is going to kick your ass. That way you’ll know I’m alive.” Before leaving, he added for good measure: “I hated you, by the way, in Tropic Thunder.”

Borstein, 48, took the stage to accept the award for Outstanding Supporting Actress in a Comedy Series, The Marvelous Mrs. Maisel, pulling off the tricky one-two punch of making a joke about undergarments before recounting a story about the horrors of the Second World War.

The actress began her speech with a quip about last year’s Emmys, noting, “I know a lot of people were upset because last year I wasn’t wearing a bra, so this year I’m not wearing underwear… It looks pretty on TV but it’s like a hot bikram yoga class in here.”

But then, in one of the most powerful moments of the show, she pivoted into what the award meant to her personally, declaring, “I want to dedicate this to the strength of a woman,” including her mother and grandmother, the latter of whom survived the Holocaust.

“My grandmother was a Holocaust survivor,” she continued. “She turned to a guard — she was in a line to be shot into a pit — and she said, ‘What happens if I step out of line?’ And he said, ‘I don’t have the heart to shoot you, but somebody will.’ And she stepped out of line. And for that I am here and for that my children are here. So step out of line, ladies. Step out of line!”

Patricia Arquette Makes a Plea on Behalf of the Trans Community

A double nominee on the evening, Arquette, 51, accepted the award for Outstanding Supporting Actress in a Limited Series or Movie for The Act with the acknowledgement that, “I’m grateful to be working. I’m grateful at [51] to be getting the best parts of my life.” But she then went on to discuss her continued mourning for her sister Alexis Arquette, a trans actress and cabaret performer who passed away at age 47 in 2016.

Julia Louis-Dreyfus Gets the Last Laugh

Julia Louis-Dreyfus may not have broken the record for most Emmys won by a female performer (she’s tied with Cloris Leachman with eight) on Sunday, but she was feted onstage along with the entire cast of the comedy Veep, which signed off with its final season earlier this year. And in true fashion, the 58-year-old left the audience in stitches when she began delivering a heartfelt tribute to the show before pausing as the rest of the cast watched on.

Jon Hamm got almost as big a laugh later in the show when he quipped that he’d play all the nominated TV series in full on the Emmys broadcast, since it was running short. He then told the audience, “Get comfortable and get ready to laugh because here comes Chernobyl.”

Pose star Billy Porter made Emmy history on Sunday night when he became the first openly gay African-American man to win the award for Outstanding Lead Actor in a Drama Series.

“The category is LOVE, y’all, love!” Porter, who turned 50 yesterday, told the audience, channelling his on-screen emcee character Pray Tell. He then quoted Frederick Douglass before concluding with a message for other artists.

Williams, 39, used her platform while accepting the award for Lead Actress in a Limited Series or Movie for Fosse/Verdo to go viral with a speech that began with noting how the producers of that miniseries listened to her needs and treated her with equality and respect.

“When you put value into a person, it empowers that person to get in touch with their own inherent value,” she continued. “And then where do they put that value? They put it into their work. So the next time a woman, and especially a woman of colour because she stands to make 52 cents on the dollar compared to her white male counterpart, tells you what she needs in order to do her job, listen to her, believe her. Because one day she might stand in front of you and say thank you for allowing her to succeed because of her workplace environment and not in spite of it.”

The aforementioned British series Fleabag took home four Emmys, including two for the show’s creator Phoebe Waller-Bridge (Outstanding Lead Actress and Outstanding Writing in a Comedy Series), who grew the series out of a one-woman show she performed in Edinburgh.

Upon taking the stage to accept the award for Outstanding Lead Actress in a Comedy Series, the 34-year-old began her speech by describing what the acting process means to her: “I find acting really hard and really painful.”

Meanwhile, at 21, Jharrel Jerome is young enough to have his high school announced as part of his bio while accepting the award for Outstanding Lead Actor in a Limited Series or Movie for When They See Us.

“I feel like I should just be in the Bronx right now, chilling and waiting for my mom’s cooking,” Jerome quipped after taking the stage, his mother cheering him on from the audience.

When They See Us, directed by Ava DuVernay, focuses on the infamous Central Park jogger case that saw five innocent African-American men serve jail time for the rape and assault of a white woman in New York. Jerome, a standout in the 2016 Oscar-winning film Moonlight, portrayed one of the falsely imprisoned men in the film and dedicated his award to them as they cheered him on from the crowd. “This,” he declared, “is for the men we know as the Exonerated 5.”

And Jason Bateman, 50, didn’t take home any acting hardware on the evening, but he did win the award for Outstanding Directing in a Drama Series for Ozark, which surprised many — including him.

“Wow,” he said, shocked, as he took the stage. “That is something.”

Notable 45-Plus winners on the evening include…

Patricia Arquette, 51, Outstanding Supporting Actress in a Limited Series or Movie, The Act

Emmys 2019: Best-Dressed on the Red Carpet