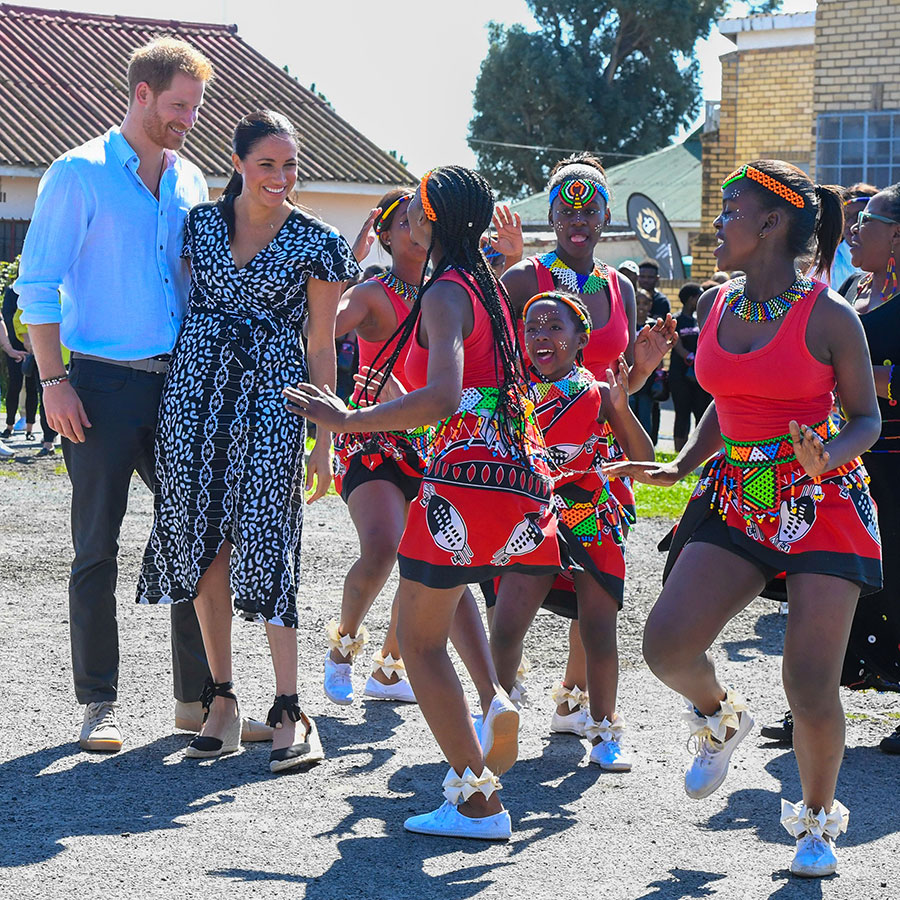 They are fresh off a whirlwind couple’s getaway weekend in Rome, where they attended the wedding of American-based British fashion designer Misha Nonoo (mutual pal of the Sussexes and their rumoured matchmaker) and American millionaire Michael Hess, and where Meghan wore a $13,200 Valentino dress. They hobnobbed with fellow guests Ivanka Trump and Jared Kushner, Gayle King, Princesses Eugenie and Beatrice, Karli Kloss and Katy Perry.

On Monday, there was no official photo op of the family disembarking from the plane, although a few fuzzy paparazzi shots posted on the Daily Mail website showed Prince Harry, Meghan and Archie, wearing a blue coat and little white tuque, coming down the stairs from their British Airways flight and escorted into the terminal.  On the ground and at work, Meghan went for both fashion diplomacy and approachable, low-priced, no-nonsense practicality, donning a black-and-white wrap dress by Malawian print-maker Mayamiko (organic cottons, woven by solar-powered equipment by local artisans) that rings in at approximately $113.

Genius move, considering the flack over spendthrift weddings, fashions, Frogmore Cottage renovations and private jets the couple has sustained after a tabloid-unfriendly summer.

The visit signals their back-to-work intention and delivers the messages of the causes they are spotlighting. Meghan began by addressing her connection to the women in Nyanga township, which has the unfortunate reputation as the country’s murder capital. “And just on one personal note, may I just say that while I’m here with my husband as a member of the Royal Family, I want you to know from me I am here with you as a mother, as a wife, as a woman, as a woman of colour and as your sister.”

In further fashion news, the couple was given matching red beaded bracelets spelling out the words JUSTICE, echoing the matching beaded bracelets that eagle-eyed fans spotted on now-deleted posts on the Duchess’s former lifestyle blog they used as evidence of their coupledom. The statement jewelry was from human rights org Justice Desk, supported by the Queen’s Commonwealth Trust. Notably, the assembled schoolchildren got new father Harry to show off his fresh “Dad dance” moves in videos that were quick to make the viral rounds.

One of the chief issues the royal pair will highlight is femicide, which South African President Cyril Ramaphosa recently declared  a state of emergency. August was the most deadly month on record for crimes against women, leading Ramaphosa to say South Africa is now one of “the most unsafe places in the world to be a woman.” One woman is murdered every three hours, according to government estimates, with many also raped and otherwise assaulted. The visit included demonstrations of self-defence classes for young women.

The Sussexes are hoping to use their star power to focus attention on urgent issues such as these as they are followed around by 80 accredited international media crews and some 300 local media reps.

The couple are due to visit the District Six Museum on their first day, a place commemorating forced relocation during Apartheid. And Meghan has brought along some of the things Archie has outgrown to give to local shelters and charities. She is also hoping to swap recipes with the moms she meets along the way.

The general tone of the tour is low key (no state dinners or tiara moments, as they want to be back at the High Commissioner’s Residence for bath and bedtime with Archie); focused on serious issues in which they are personally invested; a work-facing (and dressing) agenda. It feels well thought out in order to reposition the Sussex family as hands-on doers rather than jet-setters.

The heady mix of adulation and the glam Hollywood world they inhabit has overshadowed their charity messaging since their relationship began. This well-executed and sharply intentioned first day of their first family ambassadorial tour marks their Royal Highnesses’ joint statement that they mean business.