Royal Tour Day 2: Mindfulness and a Mosque Visit, and Baby Archie Still a No Show 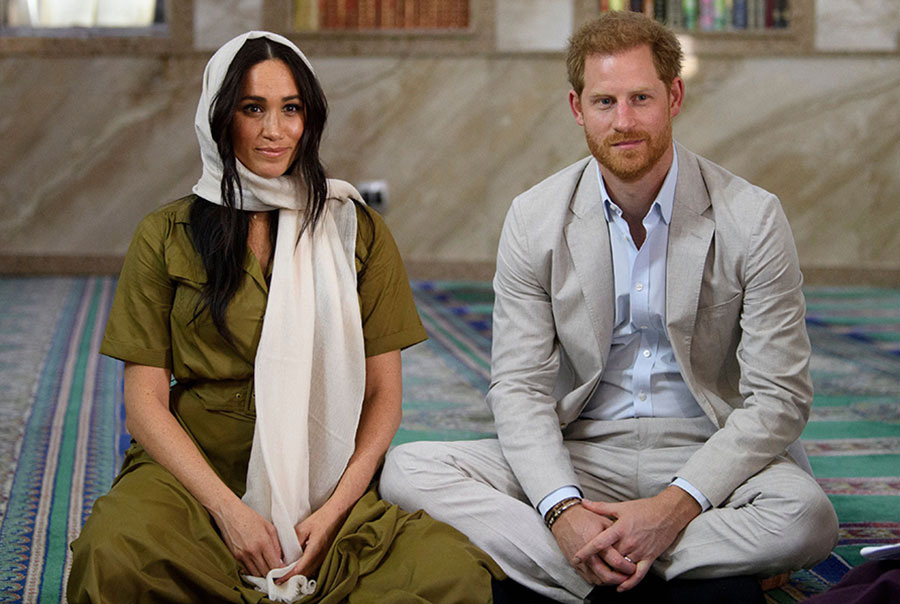 As South African crowds, a battalion of news crews and armchair fans the world over remain on Archie watch, the Duke and Duchess of Sussex hit Monwabisi Beach at False Bay in Cape Town this morning. There, the royals met with reps from Waves for Change, a group that offers surfing — and a unique mindfulness practice called Power Hands — as therapy for at-risk youth exposed to poverty and violence.

The royal baby was back at their undisclosed (for security reasons) Cape Town digs with a nanny as mom and dad headed to the beach.

Harry was decked out in his usual neat-casual vibe, sporting khakis, a forest-green button-down and grey Adidas sneakers. Oh to be a royal man, and avoid the fussing and fawning over your wardrobe, which is not dissected for its sell-through rate online in the hours after posting!

It’s not the same for Meghan, who made her own waves today by throwing back to an outfit from her single days. First seen circa 2017 when she began dating the ginger Prince, she wore a faded jean jacket by Madewell, jauntily turned up at the collar.

In the absorbingly arcane world of royal sartorial decorum, the jean jacket on duty may be a “first” for a senior working member of the Firm. She finished the outfit with black skinny jeans by the label Mother, a simple white Oxford shirt and some sensible (and sand-friendly) flats.

In an effort to blend in and tone down the flashiness,  her hair was tied back from the wind. She has a hairdresser on board for the tour, at the couple’s expense, but that handiwork wasn’t on display till later in the day when there were no ocean breezes at play.

They had an opportunity to see The Lunchbox Project in action, a local charity that provides hot lunches to some 30,000 youth every day. Notably, it was one the charities that the couple asked well wishers to donate to in lieu of gifts to celebrate Archie’s birth.

Meghan spoke about her hopes for the world and the positive examples of inclusivity she had seen thus far in South Africa, but it was the personal touches (literally) that caught spark in the media. When asked to share their strengths with Waves for Change youth in a welcome circle — cue the awwws — both praised the other as the best mom and best dad.

The honeymoon is clearly not over for the new parents, who also put on some PDA with a kiss and a warm embrace as Harry headed off on a solo trip to Seal Island with the Cape Town marine unit.

The expedition was to highlight the illegal — and dangerous — trade in abalone, one of the country’s top endangered wildlife species. The sky-high prices commanded by the mollusc (up to $650 a kilo) make it irresistible for poachers who risk their lives to get their hands on hard-shelled sea snails.

After a quick change, Meghan wore her long locks down albeit covered with a headscarf when the royals reunited in the afternoon to tour the Auwal Mosque, the oldest in the country, and have a peek at its ancient Qur’an scrolls before meeting with religious leaders.

The mosque is located in the colourful neighbourhood of Bo-Kaap, which used to be known as Malay Quarter. The houses, when they were rented to Malaysian and Indonesian slaves, had to be painted white. After the emancipation of 1833, they were joyfully painted in defiance of the earlier edict, becoming colourful symbols of freedom.