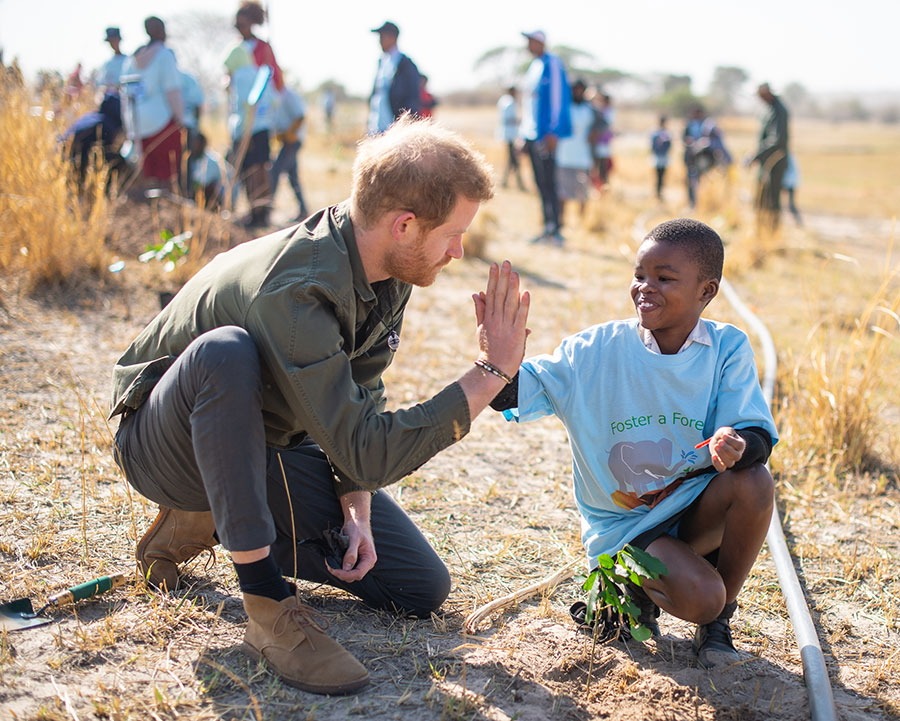 Diana, Princess of Wales,  was very much on the Duke of Sussex’s mind today as he visited Botswana, where Prince Charles took young Harry and William after she died in a tragic Paris car crash in 1997.

“Fifteen years I’ve been coming here. It’s a sense of escapism, a real sense of purpose,” Prince Harry, 35, told reporters at the Chobe Forest Tree reserve today. “I have some of my closest friends here and I came here … straight after my mum died, so it was a nice place to get away from it all.

“But now I feel deeply connected to this place and to Africa.”

It was also the place he took the woman he would marry, Meghan Markle, in 2017, just weeks into their romance. He later sourced two diamonds from that country for the engagement ring he put on her finger.

Today, his four-month-old son, Archie, and Meghan, now Duchess of Sussex, stayed put in Cape Town as the Duke set out on his own. After arriving in Botswana last night, he began his solo day at the forest reserve. Keeping the focus for the royal tour on youth, the Prince Harry helped plant a tree raised from a seed by local schoolchildren.

He dedicated part of the Botswana forest to the Queen’s Commonwealth Canopy, an initiative that helps protect forest and wildlife in a critical area located at what is called Africa’s Four Corners, near the borders of Namibia, Zambia and Zimbabwe. The Canopy’s aim is to help open up borders and facilitate a protected corridor for the free and safe passage of wildlife.

Harry spoke out against climate change and gave his praise and support to the young people who went out on a climate strike around the world last Friday. He told CNN that climate change “is an emergency, a race against time and one which we are losing.” He also had stern words for politicians — who remained nameless — who do not believe climate change is caused by humans and those who insist it does not even exist. “I don’t think there is anyone in the world who can deny the science,” he said.

The Duke also visited a nearby project near Kasane, run by the Prince’s own charity, Sentebale. Set up by Prince Harry in 2006 in concert with Prince Seeiso of Lesotho — part of the Basotho royal family — the charity helps vulnerable young people who live in extreme poverty and/or with HIV-AIDS. Over a decade and a half, Harry has kept up fundraising and active participation with the charity, which he has said was inspired by and dedicated to the memory of his mother, Diana. High-profile fundraisers include annual polo matches and the massive Sentebale concerts thrown each year.

Harry went out on a boat with the Botswana Defence Force on his second anti-poaching patrol of the tour and also met with representatives of Elephants Without Borders.

Prince Harry is on his own for the next few days, where he is due to visit Angola for an emotional return to the landmine project Halo, also close to his late mother’s heart, as well as a dedication of a hospital in her name. Following that the Prince will visit Malawi before being reunited with his wife and son in Johannesburg.