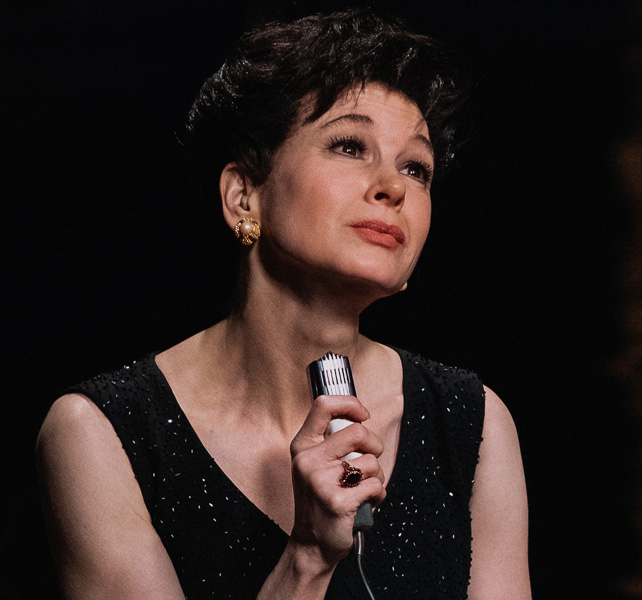 Judy Garland arrived in London in 1969 — broke, freshly divorced from her fourth husband, actor Mark Herron, and struggling with drug and alcohol addiction — in an effort to revitalize her career and reunite her family. The plan was to begin a high-profile five-week stint at the famed Talk of the Town nightclub, make good money and return to her children and a long-desired sense of normalcy.

Garland, tragically, died in London shortly after her 47th birthday, and it’s this final chapter of the Hollywood legend’s life that is explored in the new biopic Judy. Renée Zellweger, 50, plays the Hollywood star in the film, a role the Oscar-winning actress was surprised to be offered.

“I thought, ‘Wow this is a beautiful script and a beautiful story,’ and I was curious why they sent it to me, because I don’t consider myself that kind of a performer,” Zellweger said, sitting at a hotel table following the film’s Canadian premiere at the Toronto International Film Festival earlier this month.

Zellweger — whose real life golden locks, sunny demeanour and Texas twang only reinforce the brilliance of her on-screen transformation into Garland — tested her mettle for playing Garland at the famed Abbey Road studios, nearly 55 years after Garland last recorded there, joining producer David Livingstone and director Rupert Goold “to just talk and to just play around to see what might be possible.

“When they said, ‘Come, we’re going to try some things at Abbey Road’ that seemed like a really good idea to me. This may be terrible for them,” Zellweger laughed, “but I’m going.”

As it turns out, it was a very good idea. While the biopic ebbs and flows between dramatic musical portrait and stretches of monotony, Zellweger is a standout, embodying Garland in a performance she approached more from a place of perspective than apprehension.

“I just wanted to understand and sort of fill in the blanks between the public record and speculation,” she explained. “There’s always more to a story than just the tragedy of a person’s life or the difficulty … there’s the darkness certainly that comes as a consequence of having to grapple with those circumstances, but in my mind she rose through it as heroic. What she was able to achieve in spite of all of that really sets her apart and highlights how truly extraordinary she was.”

Embodying Garland took research, as well as a physical transformation that included everything from altering her hair and posture to wearing fake teeth. The actress liked adding on those layers, she explained, because it allowed her to move away from herself and into the character.

“I watched YouTube in the mirror to try to emulate some of her moves — me and Judy in the dining room.” And, as it turns out, Zellweger took the show on the road, “down the 405 freeway where no one could hear me try to make those sounds for the first time … I can’t imagine [what] somebody driving next to me would see, contorting my body to get that note out.”

In the end, the YouTube videos and freeway practice sessions paid off, with Zellweger’s performance already generating Oscar buzz while largely overshadowing the film itself.

“It was an incredible transformation that she did. I rarely saw her as Renée,” actor Finn Wittrock, 34, who stars in the film as Garland’s much younger fifth and final husband, Mickey Deans, said at TIFF. “I usually was on set after she’d got into hair and makeup and I left before she got out of it. So I was kind of always with her Judy.”

Wittrock quipped that the bigger surprise for him came when he’d see Zellweger out of character. “I was like, ‘Right, that’s who you are. Who were you pretending to be right now? Renée Zellweger? That’s weird.’”

Beyond looks and body movement, playing Garland meant singing the star’s songs, including her own rendition of “Over The Rainbow.” Goold, 47, the film’s director, brought some of the live-performance sensibility he’s honed in decades as an award-winning theatre director. That includes having Zellweger perform many of Garland’s songs live on film, like the 2012 film version of Les Misérables (in which Goold’s wife, actress Kate Fleetwood, appeared), rather than having her lip sync.

At TIFF, the director recalled explaining to Zellweger how he wanted her to perform the Garland song “By Myself” live during filming. “I remember that song and saying, ‘This is the song I want you to do. It’s not the best-known Garland song, but I think it’s the right narrative and [an] emotional song,’” he said. “Because she can sing … some of the other ones much more naturally in her own register, but I wanted it to cost something and be a risk. And I know that Renée literally going out on stage in that shot is terrified as well, so you catch a bit of that [in the film].”

“I think if you’re playing Judy Garland there’s a lot more pressure on you to do the Judy that we all know,” Wittrock added. “And she brilliantly kind of skirted that line. Her mannerisms are very accurate, but then sometimes when she sings, it’s Renée’s voice coming from her soul. And that’s what mattered more in that moment.”

In fact, Zellweger’s performances of Garland’s songs proved so impressive that she’s dropping her first CD — the film’s soundtrack, which includes a duet with singer Sam Smith on the song “Get Happy.”

The Other Side of the Rainbow

As Judy illustrates, the Hollywood studios abused Garland from an early age, force-feeding her drugs to control everything from her appetite to her almost non-existent sleep schedule. Though Zellweger took a self-imposed six-year break from Hollywood beginning in 2010 — ironically, the sort of mental and physical health reprieve that Garland so desperately needed and never received — the actress said there was no similarity between her off-screen struggles and Garland’s.

“Again, it’s a different era,” Zellweger explained. “[Garland’s] probably one of the first who we knew as a child star [and] lived her life in front of the cameras until her later years. And that scrutiny and that sense of needing to deliver was her identity, it was her ability to take care of herself to continue to deliver on a level that was detrimental to her instrument and her health. Can you imagine that? So it was different. I don’t have the same circumstances where people have been stealing from me or that I’ve been through complicated relationships that leave me in dire straits and children that you have to take care of.”

Of her own retreat from Tinseltown, Zellweger described the toll of working long hours away from home and “complications that come from putting your work ahead of everything else all the time. And, yeah, I was guilty of that and, for me, in my personal experience, I was bored of myself. I just needed to take a minute and step back and take inventory. You can’t sleep three hours a night for a decade, it’s not good for you, they say. And it’s not a pretty look either.”

Still, in playing Garland, Zellweger found herself overcome with “so much love for [Judy], and I felt empathy and I felt outrage because … you can’t criticize in this way without putting into context those circumstances.”

As for the film, Zellweger credits the dedication of the cast and crew to the fact that “we loved her. Every person was there ’cause they wanted to somehow actively show their affection for Judy.” She added that, “It feels weird cause we’re talking about a performance, a movie. And it didn’t feel like that. It felt like, ‘But wait, there’s more.’ And this beautiful celebration.”

Which, of course, led to the inevitable question: If Zellweger could meet the late Hollywood legend, what would she say to her?

“Maybe just a hug and a ‘thank you,’” Zellweger said, leaning forward, her words accentuated by her Texas accent and brimming with genuine adulation. “A big old ‘thank-you.’”

Judy is in theatres now.

Celebrating Elaine May and Her Lasting Mark on Hollywood