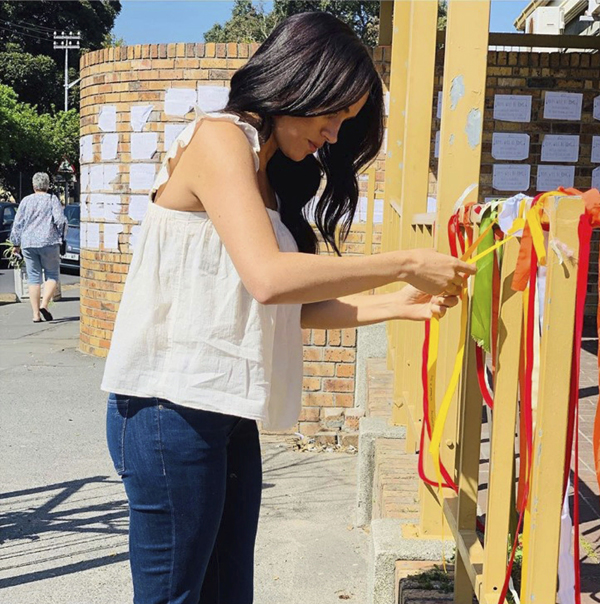 Meghan, Duchess of Sussex, ties a ribbon to a memorial to a 19-year-old Cape Town university student who was raped and murdered near the spot in August. Photo courtesy Sussex Royal via AP

Meghan, Duchess of Sussex made a private visit yesterday to a memorial for murdered Cape Town University student Uyinene Mrwetyana and tied a yellow ribbon to a the railing of the veranda.

Known as Nene, Mrwetyana was just 19 when a postal worker with a  criminal record, who subsequently confessed, used a ruse to lure her into a Cape Town post office in August where she was raped and murdered.

The crime sparked mass outrage in South Africa where 3,000 women were killed last year, or one every three hours, according to the World Health Organization. That is five time higher than the global average.

Protesters have hit the streets to publicize gender-based violence (GBV) in a country where at least 137 sexual offences are committed each day, most of them against women.

Mrwetyana’s murder sparked the rise of the #AmINext social media movement in the country.

Meghan, who stayed in South Africa with four-month-old Archie as Prince Harry carries out solo duties in Botswana, Angola and Malawi, made a secret visit to a shrine outside the post office in Clareinch, a southern suburb of Cape Town,  where mourners have left ribbons, notes and flowers in Mrwetyana’s memory.

Meghan’s security staff asked students at the high school next door to the post office to refrain from taking pictures. They were reportedly more gracious and understanding than Wimbledon fans were last month when facing a similar request to respect the privacy of the Duchess.

The visit was revealed by a royal reporter on the tour, and the Sussex Royal Instagram account confirmed it in a long and thoughtful post on Saturday.

“Simi kunye kulesisimo,” it began in Xhosa, the local language. “We stand together at this moment.” These were reportedly the words Meghan wrote on the ribbon ahead of her visit to the memorial.

“Visiting the site of this tragic death and being able to recognize Uyinene, and all women and girls affected by GBV (especially in South Africa, but also around the world) was personally important to the Duchess,” the post reads.

It said the Duke and Duchess were following what was happening with GBV and femicide “and were both eager to learn more when they arrived in South Africa.” Meghan met with  Mrwetyana’s mother this week “to pay her condolences,” and had several other private meetings while Price Harry was on his solo tour “to deepen her understanding of the current situation and to continue to advocate for the rights of girls and women.”

The focus the Duke and Duchess of Sussex have brought to the issue of violence against women may have single-handedly introduced the acronym GBV into the larger lexicon. And keeping her visit to honour Mrwetyana private (until it was revealed by a press leak) was a classy thing to do.

Although Meghan has no official events on the Royal tour schedule this weekend, Harry met with President João Lourenço of Angola to thank him for his hospitality after an emotional day retracing the steps of his mother, Princess Diana, at the Halo Trust in Dirico. He also visited the spot in Huambo where his mother was photographed walking in a landmine field 22 years before. The Prince himself picked up the torch, raising awareness about how landmines continue to pose a threat to Angolans, particularly in the rural areas, and  to wildlife conservation in the formerly war-torn country.

At the British ambassador’s residence in Luanda the night before, Harry had the chance to take the human side of the landmine story full circle when he met with Sandra Thijika, a landmine victim who brought Diana to tears in a 1997 meeting. Thijika, now a mother of five, named one daughter Diana in tribute to the Princess of Wales.

Thijika recounted for Prince Harry how she met Diana,  and how she was pictured in press photos sitting on his mother’s knee. “At the time I was very small, I was a very tiny girl and they started measuring my knee so they could see how the prosthetic would fit.” Diana, she said, started crying as she watched the fitting. So the two of them went outside to sit under a fig tree to talk. That conversation meant a lot to Thijika, she says now, telling Diana’s son that the honour of having the attention of a princess made her “feel very complete.” Harry told Thijika that he hoped “your children will be growing up to your age and there won’t be any landmines.”

Following his trip to the Presidential Palace, Harry went on today to  visit the Maternity Hospital Lucrecia Paim. The hospital is tackling the issue of transmission of HIV/AIDS from mother to baby. The Angolan first lady, Ana Dias Lourenço, has launched a project there called “Born Free to Shine.”

While Angola has relatively low HIV-AIDS infection rates, its mother-to-baby infection rate is the highest in this part of Africa. That is attributed to the fact that awareness about the transmission of the disease to offspring is low among the population, which is also young and highly fertile.

After his day in the field yesterday, Harry cleaned up beautifully in another slim suit, this one light grey. Tomorrow he continues on to Malawi, where he will learn about British-backed projects to encourage education for girls. Then he will move on to Johannesburg, South Africa, where he will be reunited with Meghan and Archie for the last leg of the tour.