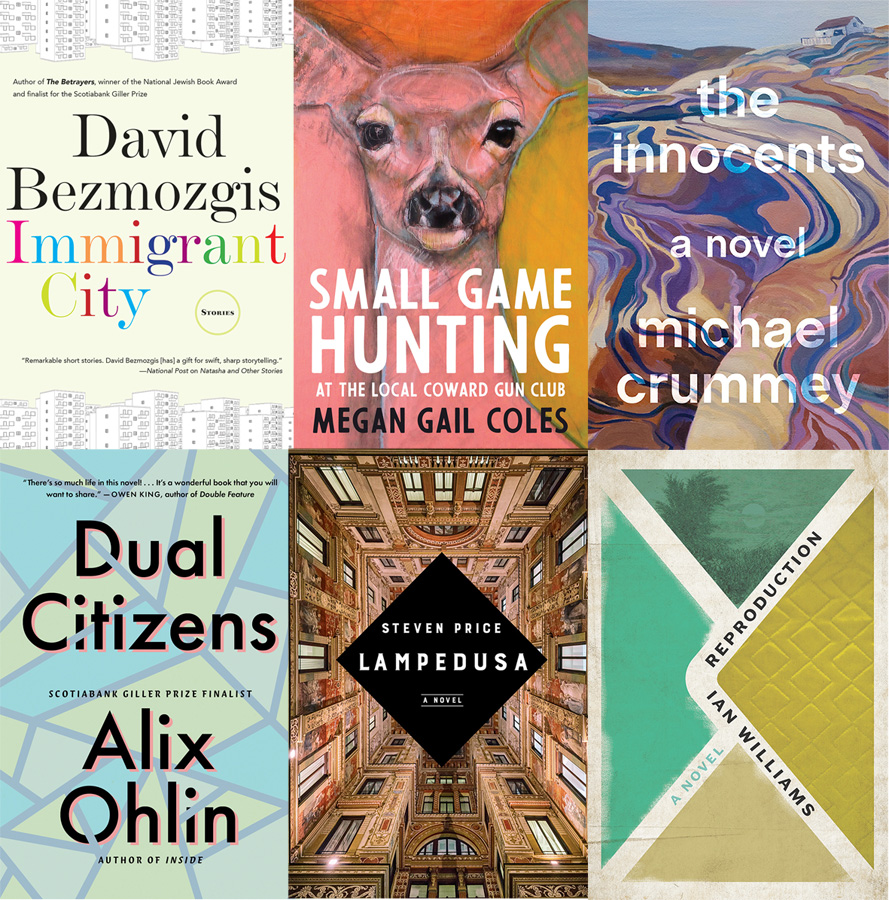 The Scotiabank Giller Prize announced its shortlist of six authors this morning, narrowing the competition for the annual $100,000 award that recognizes the best in Canadian fiction.

“It’s an exciting day for readers and writers in this country,” Gill Deacon, the host of CBC’s Here & Now and emcee of the announcement ceremony, said.

Noticeably absent from the list, however, is Margaret Atwood, whose The Testaments, the sequel to The Handmaid’s Tale,  didn’t make it beyond the Giller longlist. The 79-year-old won the Giller Prize in 1996 for Alias Grace and her exclusion from this distinctly Canadian award this year comes as a surprise, particularly since The Testaments is the favourite to win the U.K.’s Booker Prize later this year.

The six finalists are below (in alphabetical order): This collection of short stories will be the third to be shortlisted; The Betrayers was shortlisted in 2014 and The Free World in 2011.

In their citation, the jury said: “In this wise and assured collection, Bezmozgis has reimagined immigrant lives not simply as marked by displacement and discontinuity, but of immigration as a shared and binding experience that crosses the boundaries of race, nationality, occupation, class, politics and even past betrayals, to serve as a point of connection and compassion between Bezmozgis’s characters.” This is Coles’ first novel and first nomination. In their citation, the jury said: “This is not your traditional Newfoundland novel of social isolation. Instead, Megan Gail Coles portrays the harsh existence of the islanders’ as emblematic of the human condition itself. The characters’ lives unfold around a fine restaurant. They are physically and emotionally crippled by their society’s devastating inequalities, the women psychologically maimed by repeated sexual assault. Coles’s narrator storms against the status quo in a kinetic novel that dazzles, challenges and exhilarates.”

The Innocents by Michael Crummey

Crummey was also on the Giller shortlist for River Thieves in 2001.

In their citation for The Innocents, the jury said: “Written in a language that is at the same time fresh and ancient, Michael Crummey’s The Innocents is a (mis)creation myth that demands a reconsideration of what we think we know about love and death, family and loneliness, oblivion and wisdom, horror and beauty, bodies and knowledge, violence and desire. Anchored in exquisite specificity and heartbreaking simplicity, and inviting us into a distant past that makes fresh matters of ever-present concern about survival and sacrifice, Crummey’s novel has the capacity to change the way the reader sees the world.” She was also on the shortlist for Inside in 2012.

In their citation for Dual Citizens, the jury said: “Alix Ohlin’s novel, true to its title, quietly refutes monolithic tenets that regard identity as something fixed and singular. Dividing its narrative between Canada and the U.S., the urban and the wild, solitude and solidarity, creativity and caregiving, Dual Citizens is a long-term sororal love story and affecting double-portrait of female self-actualization untethered from established paradigms of ambition.” He was also longlisted for By Gaslight in 2016.

In their citation, the jury said: “Lampedusa is a fairy tale about a dying prince, the last of his line, the real-life Giuseppe Tomasi di Lampedusa, author of the beloved Italian novel The Leopard … Set in a post war Palermo of bombed-out buildings and ruined palazzos, the novel contemplates what values are worth retaining in life and in art. A masterful storyteller, Price conjures Tomasi with language and images that evocatively fix him and his distant world indelibly in our minds.” This is the award-winning poet’s first novel.

In their citation, the jury said: “It’s an engrossing story of disparate people brought together and also a masterful unfolding of unexpected connections and collisions between and across lives otherwise separated by race, class, gender and geography. It’s a pointed and often playful plotting out of individual and shared stories in the close spaces of hospital rooms, garages, mansions and apartments, and a symphonic performance of resonant and dissonant voices, those of persons wanting to impress persuade, deny, or beguile others, and always trying again.”

Canadian singer, songwriter and author Jann Arden, 57, was also announced as the host of the gala ceremony to celebrate the finalists on November 18.

“Jann has won no less than eight Juno awards and she’s written four books herself,” says Barbara Williams, vice-president of English services at CBC. “Like everything she does, Jann will undoubtedly be great in this role too.”