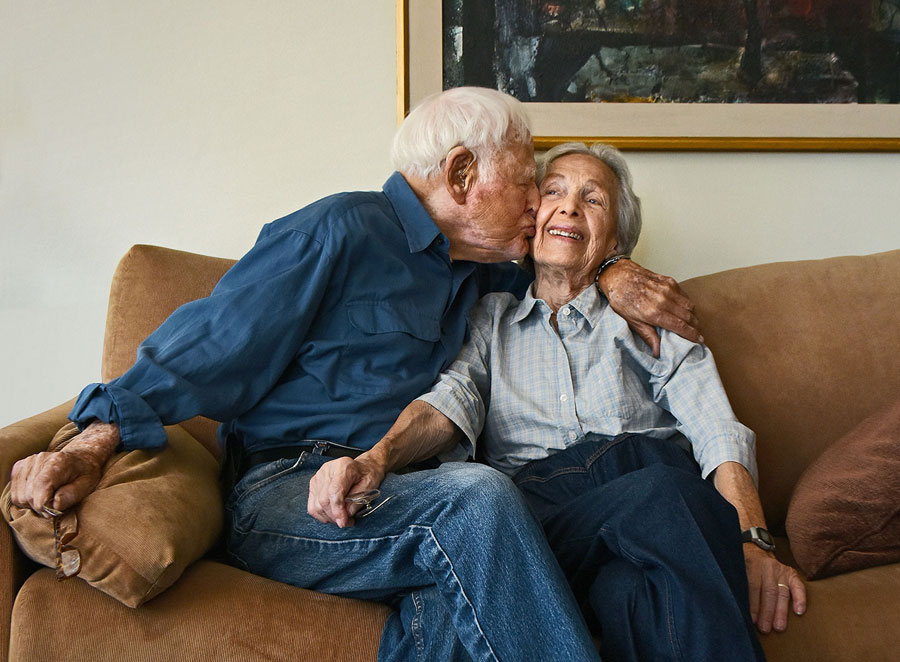 Karsten Thormaehlen didn’t begin his career in the most aging-positive industry. The 54-year-old German photographer, who has travelled around the world to snap portraits of centenarians for his photography books and exhibits, began his career in the late 90s as an art director in New York, taking photos for high fashion, luxury goods and cosmetic advertising campaigns. But after years of working in the youth-obsessed industry, Thormaehlen says he found himself yearning for something more genuine.

“This advertising stuff is all a big lie. We have 14-year-old girls being photographed for [anti-aging] creams,” Thormaehlen says in a telephone interview from Frankfurt, Germany. “So with my [photography] projects, I tried to do something more honest and find the beauty in every age.”

Thormaehlen also attributes his shift in focus to some of his early memories as a photographer. As a young man, Thormaehlen chose to complete his civil service hours — which was required in lieu of military service — in a long-term care facility, where he organized excursions and extracurricular activities and often took photos of residents.

Revisiting those roots led to nearly a decade of projects featuring older subjects, including two photography books focusing on centenarians, Happy at 100 and Aging Gracefully: Portraits of People Over 100, as well as several photography exhibits, including The Art of Aging, which is currently on at the BollAnts hotel in Bad Sobernheim, Germany.

“When I met my first centenarian lady, I was so impressed by her vitality and this was something I wanted to communicate as a photographer and bring to the world,” Thormaehlen says.

Two decades after his exit from New York, Thormaehlen has returned to the advertising fold, this time shooting centenarian models who embrace their wrinkles in an ad campaign for German clothing company’s Seidensticker’s 100th anniversary.

While the company’s willingness to break with the tradition of using younger models has more to do with their 100 years in business than breaking down barriers, Thormaehlen believes these images can play a part in fighting age discrimination and changing perceptions around aging.

“Images are so much stronger than words,” he says. ” An image is something you always remember, and if it’s good, it accompanies you all your life.”

And while the images are important, Thormaehlen has always allowed his subjects to tell their story, both in the accompanying bios and the portraits themselves, which often involve collaboration with his subjects.

Particularly memorable was a portrait he took of Morrie and Betty Markoff, who were married 80 years before Betty passed away in September at the age of 103.

Betty, who moved from Toronto to Queens, New York with her family when she was 10, met Morrie, a Harlem native, at a wedding in New York City in 1938. Soon after they met, Morrie left the East Coast for California and eventually asked Betty to join him, which according to Betty, was his idea of a marriage proposal. Morrie, however, was plenty romantic, a quality that, he once explained, didn’t have to revolve around the words ‘I love you.’

“Love is possessive, it’s controlling and demanding. The word that I would rather use instead is ‘caring’. You care about people. ‘Care’, to me, has a much deeper meaning,” he told The Guardian newspaper in a 2017 interview. “Love is an esoteric word, but one that people also use to mean all sorts of off-hand things. ‘I love playing tennis,’ and such. I hug Betty constantly, I kiss her constantly, I care very much about her.”

For Thormaehlen to capture that sentiment in his photo, it would take a little bit of Morrie’s ‘show don’t tell’ philosophy.

“They were sitting side by side, and I said, ‘this doesn’t work, ‘can you do something more fun?'” Thormaelen explained of the shot. “So he kissed her and she was totally surprised and you could see that on her face.”

That kiss and look of delight may best encapsulate what the photographer says he hopes his collection of photos conveys: “That you can have fun at any age.”

And as for a commonality among his subjects who have hit the century mark — the secret to longevity if you will — having fun is closely related.

“The one thing you always find is a sense of humour,” Thormaelen says. “The certain view of humour onto life and even on their very late life.”