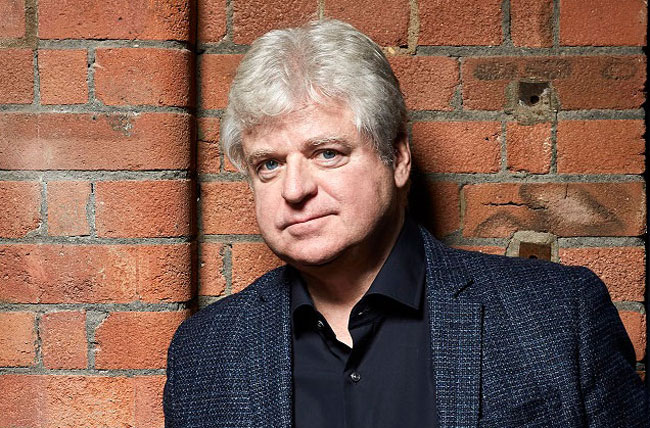 What thrills a thriller writer? For Canadian novelist Linwood Barclay, you might start with model trains.

It turns out the 64-year-old best-selling author considers himself a “model train nerd,” a piece of information he reveals in a phone interview from his home in Toronto. “I had a model railway at our [old] house in Oakville that filled a room. It was 14 by 14 feet. It took an entire week to tear it all down [to move to Toronto]. We’re already rebuilding.”

Then, of course, there’s his friendship with Stephen King, a noted fan of Barclay’s work. Well, perhaps “friendship” is a strong word.

“I hesitate to say we’re friends — that seems presumptuous — but my wife says we’re friends,” Barclay laughs, adding that King recently reached out to him about a screen adaptation of one of his books that’s set in Toronto, asking for details about the city to ensure the story is accurate.

Barclay, though, relishes telling the story of how he and his wife met King at a book event in Toronto two years ago. “I was getting him to sign a copy of his new book [Sleeping Beauties] for me and my wife, Neetha, who has kind of an unusual name. I was about to offer to tell him how to spell my wife’s name, and he said, ‘You don’t have to tell me how to spell Neetha. You dedicate every single book to her. I know how to spell it.’ That’s pretty nice.”

In fact, Barclay and King are known to swap copies of their work with each other, with Barclay calling King’s latest, The Institute, one of the best pieces of writing the famed author has ever produced.

“It amazes me that a guy, at this stage in his career, when most of us would choose to coast, he does not. And he turns out an ambitious book like The Institute or, a few years ago, 11/22/63. I’m just in awe.”

Barclay is no stranger to inspiring awe in readers. The former Toronto Star humour columnist pivoted back to his first love — writing fiction — in 2007 at the age of 52, kicking off a best-selling streak of 19 novels and establishing himself as a preeminent thriller writer sometimes called “Canada’s Stephen King.” His latest novel, Elevator Pitch, hit bookshelves in September.

“It doesn’t get old. It’s still exciting to find it in stores and see it out there and so forth. And every book is like a new adventure because you think — as a guy who always thinks he’s on the cusp of complete failure — will this be the one that completely tanks and then it’s all over? And so I never get over that,” Barclay says, an odd sense of self-deprecation for an author who has achieved a level of success others would kill for. He admits the worst part about writing a book is sending the first draft to his editor and waiting for a reaction. “It’s like waiting for tests back from the doctor’s office,” he explains. “Is it benign, or how bad is it going to be?”

Appearing at the Toronto International Festival of Authors

The prognosis, so far, is good, as Linwood Barclay fans in Canada and abroad can attest. Some of those fans will have a chance to see Barclay in person at the 40th Toronto International Festival of Authors (TIFA) at two separate events: Don Winslow in Conversation with Linwood Barclay on Oct. 24 and Double Interview: Linwood Barclay and Torkil Damhaug on Oct. 26.

“One reason this is a very fun festival to do this year is that I got to pick someone that I would really like to talk to,” Barclay says about his conversation with Winslow. He notes that events like TIFA also offer a great opportunity to meet different writers and fans in one venue. “I was interviewing Ian Rankin last year, and we filled the hall for that. That was a sell-out,” Barclay says, before adding wryly, “As I said to Ian, ‘I just hope some of them are here for you.’”

The events also offer the opportunity for an audience Q&A, and Barclay recalls some of the most common questions he receives from fans, including “Where do you get your ideas?” He understands that one — if you don’t write yourself, he notes, it can be difficult to understand how a writer comes up with ideas — though he adds, “You always love it when somebody stands up and says, ‘Not so much a question as a statement.’ And then it’s like, ‘Okay, let’s go get a sandwich or something.’”

One question I have for Barclay, who delivers roughly a novel a year, is about his upcoming work. He opens up about a manuscript he’s written with this tantalizing pitch: “Think Jurassic Park, but instead of dinosaurs, it’s self-driving cars.”

All right, you’ve got my attention.

“You have a test community on a kind of Martha’s Vineyard location where a company comes in and says, ‘Everybody put your regular cars on the mainland. We’re going to give you all a self-driving car because the best way to test them is if every car on the road is one.’ And once this experiment is underway, a virus gets introduced into the system, and the cars all become basically homicidal. Kind of like a thousand Christines,” he says, referencing Stephen King’s 1983 novel Christine about a possessed Plymouth Fury.

Barclay admits that he “had a blast writing it,” but “it’s not what people would expect from me. So I don’t know what quite to do with that book yet.” As such, its release isn’t imminent, but readers can rest well knowing that a Barclay book about killer cars is in the shop and hopefully ready to hit the road in the coming years.

A Word of Advice…

Another common question authors are often asked is, “How do I get started writing a book?” For Barclay, the answer is simple.

“Just start it. Don’t stare at a blank screen,” he says, “You can always fix stuff that you didn’t like, but if there’s nothing there at all, then you don’t have anything to edit or fiddle with.”

You don’t even need a fully formed idea to put the proverbial pen to paper. “I wrote a book years ago, and I wrote 100 pages of it and then realized it was the middle of the book. So then I had to do a whole third of it that got me to that point. So I think it’s like standing at the edge of a cold pool — the water’s cold and you just don’t want to jump in, and then you figure, ‘I’m going to do it’ and you jump in. And the first couple of seconds are horrendous and then you get used to it. I think that’s kind of what it’s like to start a book.

“But,” he continues, “I’ve had questions like this at events, where [someone] will say, ‘Well, do you double space? How wide do you set your margins?’ And I think, ‘If that’s your question, maybe you’re not ready.’”

He enjoys questions from the audience because sometimes people ask something thought-provoking or insightful. He offers the example of the question, “Does it get harder or easier to write a novel as the years go by?” It’s a question he consequently asks other authors. “When you get up to book 20, you want to give readers something that’s not like everything else, but it has to be similar enough to everything else that you’re giving them what they want.”

When asked what kinds of questions that readers should ask at TIFA, Baclay says anything they want.

“I won’t be a grumpy old son of a bitch about it,” he laughs. “I hope they learn something or hear something that they didn’t know. That something comes up in the course of the discussion that they think, ‘Oh, I had no idea that Don Winslow did this.’ Or, ‘Oh my god, Linwood Barclay is actually a model train nerd! Who knew that? Why didn’t he keep that a secret?’”

Click here for more information about the 2019 Toronto International Festival of Authors.

Wisdom of the Authors with Canada’s Queen of Suspense, Joy Fielding