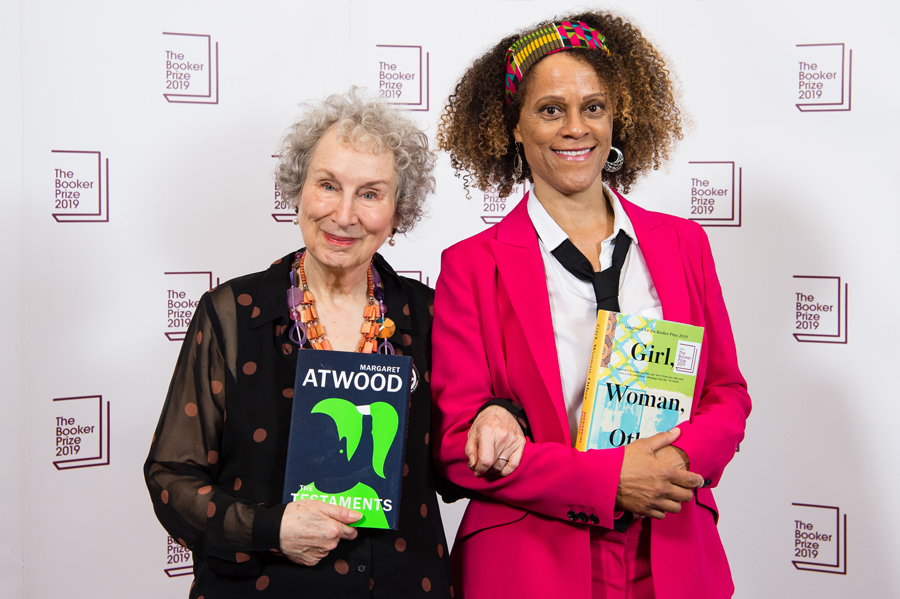 With the win, Margaret Atwood, at 79, ranks as the oldest Booker winner ever while Bernardine Evaristo, 60, becomes the first black woman to receive the prize.

In a surprise twist, authors Margaret Atwood and Bernardine Evaristo both won this year’s Booker Prize — a joint win announced at Monday’s gala ceremony in London. While the Booker rules state there can only be one winner, Peter Florence, the chairman of the Booker judges, said there was no other option than to rebel.

“We found there were two novels we were not willing to give up,” Florence said of the jury, who tried consensus and voting before deciding there should be two winners. “This year of all years, there is a context that both these books are heard loudly and gloriously around the world.”

The dual win proved historic in two ways. First, the 79-year-old Atwood, who took home the prize in 2000 for her novel The Blind Assassin, now stands as the oldest winner in Booker Prize history with her win for The Testaments, the follow up to her dystopian classic The Handmaid’s Tale. And Evaristo, 60, becomes the first black woman to win the award with her novel Girl, Woman, Other, which follows 12 characters that narrate stories of inclusivity, feminism, sexuality, race and community.

After embracing Evaristo and joking to the crowd that they both had curly hair, Atwood admitted she never expected to win.

“I would have thought I was too elderly and I kind of don’t need the attention,” Atwood said to Evaristo on the stage after accepting the prize. “So I’m very glad that you’re getting some. It would have been quite embarrassing for me… if I had been alone here, so I’m very pleased that you’re here too.”

Evaristo added that, “It’s so incredible to share this with Margaret Atwood, who is such a legend. I will say I am the first black woman to win this prize. I hope that honour doesn’t last too long. I hope other people come forward now.”

Judge Xiaolu Guo described the British-born Evaristo’s book as, “a must-read about modern Britain and womanhood. This is an impressive, fierce novel about the lives of black British families, their struggles, pains, laughter, longings and loves.” And in an interview with The Guardian earlier this year, Evaristo expressed her frustration that black British women weren’t visible in literature.

“Now there are more people of colour on television in a single day than there were in my entire childhood,” she said. “Making the work happen, rather than waiting for other people to offer you opportunities – that’s very much the job of the writer. It’s about creating those characters and stories that need to be told, rather than waiting for someone else to tell them.”

Florence, meanwhile, noted that The Testaments is, “beautiful in its depth and exploration of the world of Gilead. It might have looked like science fiction back in the day. Now it looks more politically urgent than ever before.”

Heading into the awards ceremony, The Testaments ranked as the bookmakers’ favourite to win the prestigious literary award.  Aside from her 2000 Booker Prize win, Atwood been shortlisted for four other books: The Handmaid’s Tale (1986), Cat’s Eye (1989), Alias Grace (1996) and Oryx and Crake (2003).

The Booker win comes less than a month after the passing of her partner, Canadian author and conservationist Graeme Gibson — who died at 85 in September following a battle with dementia — and two weeks after The Testaments was left off of shortlists for both the Scotiabank Giller Prize and the Governor General’s Literary Awards. Last month, however, the Canadian author appeared on the cover of Time magazine amid the announcement that The Testaments was being primed for the small screen by Hulu, which also produces the award-winning TV adaptation of The Handmaid’s Tale.

Atwood’s win roused support for the author back home in Canada, including from Prime Minister Justin Trudeau, who tweeted his congratulations and added, “Your words have had a powerful impact on Canadians for decades, and we’re proud to see your work recognized around the world. Bravo to Britain’s @BernardineEvari for her win as well!” And Canada’s Governor General, Julie Payette added, “On behalf of all Canadians, congratulations!”

Atwood, for her part, poked fun at the Booker proceedings through a tweet of her own ahead of the Booker Prize announcement.

The Booker Prize has been jointly awarded twice before, to Nadine Gordimer and Stanley Middleton in 1974 and to Canadian Michael Ondaatje and Barry Unsworth in 1992. In 1993, the rules were changed so that only one author could win the prize. This is the first time since then that two authors have been announced as joint-winners. Atwood and Evaristo will share the £50,000 prize money.

The two won over writers including Lucy Ellmann for Ducks, Newburyport, Chigozie Obioma for An Orchestra of Minorities, Salman Rushdie for Quichotte and Elif Shafak for 10 Minutes 38 Seconds in This Strange World. The shortlist was selected from 151 submitted books.

Margaret Atwood Talks Twitter and The Testaments In Toronto

You Can Now Take A Writing Course from Margaret Atwood