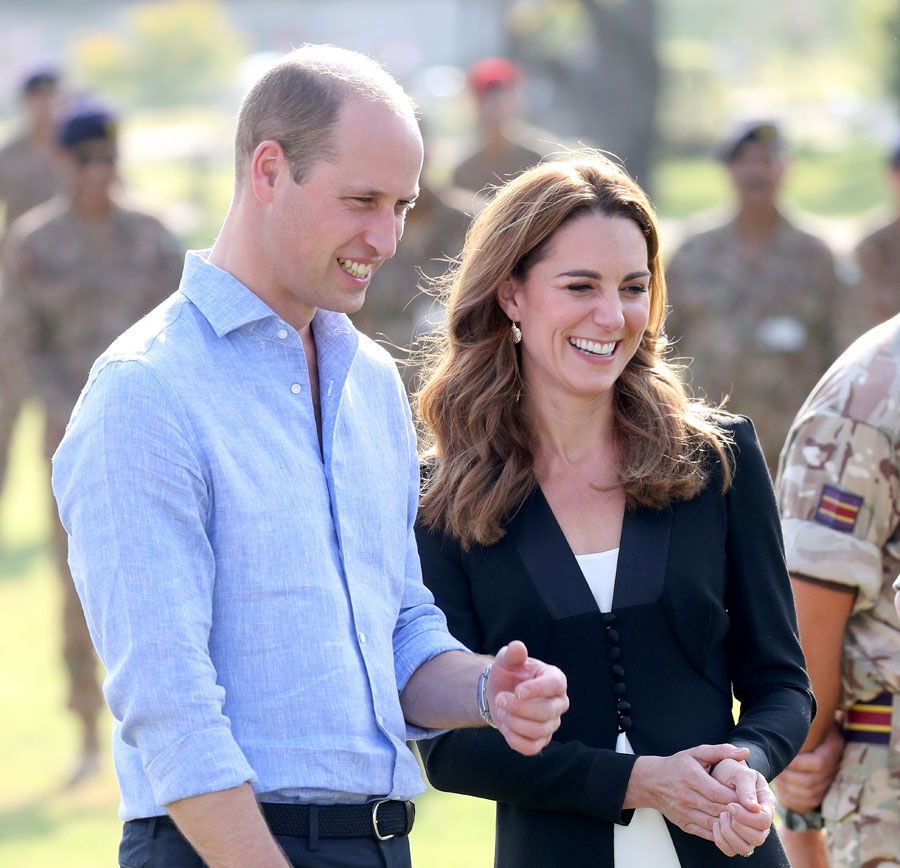 And that’s a wrap on the Duke and Duchess of Cambridge’s five-day whirlwind tour through Pakistan. The royal handlers were thrown for a loop and had to do some frantic rescheduling last night when the RAF Voyager carrying the Royals, their entourage and about 50 members of the press was forced to abort two landings in Islamabad due to lighting and turbulence. The plane turned back to Lahore for security reasons.

The travel troubles meant some of today’s itinerary had to be scrapped, including a helicopter ride over the famous Khyber Pass and a visit to a Pakistani military outpost on the Afghan border. These details, like all the plans for the tour, were kept under wraps and only released each morning for security reasons.

The one activity that did happen today also focused on security, when the Duke and Duchess of Cambridge made a very camera-friendly visit to the Islamabad Army Canine Centre where Pakistan runs its Counter Improvised Explosive Device program. British troops are helping to set up a breeding and training program for bomb-sniffing dogs at the centre, which is modelled after a dog-training facility in the U.K. The program, in place since 2015, has helped reduce suicide bombings by 30 per cent. The clever pups have taken some 19 tonnes of explosives and more than 700 homemade bombs off the streets.

William and Kate got their own golden labs to walk, named Sky and Salto. Kate wore a black jacket — still in the elongated Pakistani style — by Beulah London. She made sure to get in a local label on the last day, wearing a kurta tunic by the Pakistani label Élan as she boarded a morning flight back to Islamabad.

Kate’s wardrobe has really pulled the short and sweet tour together, visually, but the Pakistan visit was more important as an indicator of how the Royals-in-waiting will interpret their roles. The themes they hit with their event selections — education, children’s health and welfare, environment, and modernizing friendly bonds among Commonwealth nations —set the tone for the monarchy’s future.

And thus Kate’s wardrobe choices — heavy on the green and white of the Pakistani flag, respectful of local conservative dressing customs and supportive of local designers — took on outsized importance. As U.S. royal watcher Elizabeth Holmes of the annotated photo blog So Many Thoughts noted, the green colour scheme would have become quite tired if the tour went on any longer. But there were really only three jam-packed days, plus that spectacular arrival shot and a quick goodbye this morning, so the green theme worked beautifully.

Kate’s style team was careful to walk the line between appreciation and appropriation, which is difficult to do in the current climate. They managed it by leaning on outfits that riffed on the traditional Pakistani sartorial silhouette — long tops and dresses over slim pants, covered from neck to wrist to ankle. They chose Catherine Walker, a favourite designer of Kate’s — and a favourite of Diana’s before her — to contribute both the cowl-necked, ombre gown for Monday night’s airport arrival and the bright-green coat dress worn to meet with the president and prime minister on Tuesday.

Kate wore a number of shalwar kameez two-piece outfits and kurta tunics, including the elegant gold-embroidered Maheen Khan with a matching headscarf she wore to the Badshahi Mosque. And perhaps the best choice was the cheap and cheerful high-street pick by local retailer Gul Ahmed she threw in like a palate cleanser to play cricket at SOS Children’s Village on Thursday.

Her pricier choices included the standout deep-green, glittering, long-sleeved Jenny Packham gown for the second night’s formal reception (where William turned heads and won accolades for his daring traditional sherwani by local designer Nauman Arfeen). And the stunning ARoss Girl x Soler silk flowing teal midi-dress that Kate wore for the unofficial tour launch at a London reception with the Aga Khan the week before set the visual palette for the trip.

The tour was also a tricky bit of dressing for Kate, as it evoked so many memories of Diana, who visited the country in 1991 on an official solo tour and two more in 1996 and 1997 on humanitarian missions. Kate chose to pay homage to her late mother-in-law’s touring style by wearing clothes reminiscent of Diana’s outfits. Remarkably, Diana in the 90s and Kate, in this era of ’90s revival a quarter-century later, looked so timeless that they defied fashion even as they set it.

In non-fashion news, the Duchess gave her very first television news interview — to CNN — since her marriage to William. We hear her voice when she gives speeches, but hearing her talk in a conversation was in and of itself remarkable. She didn’t say anything earth shattering, but you could tell she was passionate about the chance to visit with children at the SOS Children’s Centre. “There’s so many vulnerable women here,” she began, “but they’ve really used their positivity and the support that the village here provides them … to support and protect the next generation of children in their care and give them the best possible start to their future lives.”

Watch the interview below

And on the subject of family and support, in a sweet note about the tour timing, it was revealed that the parents planned the entire trip around the children’s school week, making sure they could drop off older siblings George and Charlotte at school on the way to the airport Monday. Now they will be back at Kensington Palace for the weekend with all three little ones. The tykes have been in great hands, with Kate’s folks Carol and Michael Middleton reportedly pitching in with child care. Royals are just like us, with generations pulling together when Mom and Dad have to travel for work.