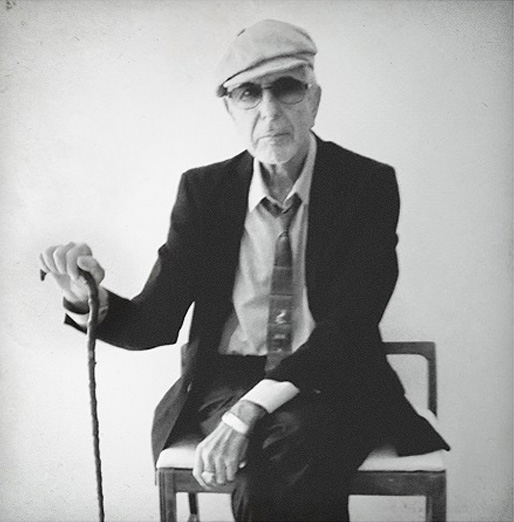 I was always working steady / But I never called it art / It was just some old convention / Like the horse before the cart / I had no trouble betting / On the flood against the ark / You see, I knew about the ending / What happens to the heart. — Leonard Cohen, “Happens to the Heart”

The first single from Leonard Cohen’s posthumous album, Thanks for the Dance, dropped Friday, a meditative tune called “Happens to the Heart” accompanied by a music video that draws on the late troubadour’s experiences living among Buddhist monks at the Mt. Baldy Zen Center in California in the mid-1990s.

Australian filmmaker Daniel Askill, who has directed music videos for artists like Sia and Placebo, was commissioned by digital video channel Nowness to lead the project — the first of multiple directors asked to conceive short films inspired by the songs on Thanks for the Dance. You can watch the video below.

“I wanted to make something that spoke to Leonard’s years as a zen monk,” Askill told Nowness. “This film is a quiet, symbolic narrative that charts the letting go of ego and the trappings of fame.”

Askill added that the video “aims to speak universally of any transition we go through in life.” Meanwhile, Nowness creative director Bunny Kinney noted the goal for the video series inspired by Cohen’s posthumous album “is not only to uphold and celebrate Leonard Cohen’s incredible artistic legacy with new visuals, helmed by some of the most exciting image-makers working today, but to also further explore Cohen’s work and the core thematics of his music: from love and loss to artistic expression itself, identity, self-reflection, transformation and transcendence.”

The late star’s son, Adam Cohen, conceived Thanks for the Dance shortly after his father died in 2016 at 82. He retreated to a converted backyard garage/production studio to “work with his father again, to stay in the company of his voice,” Adam explained in a press release. Using “bare musical sketches, at times little more than vocals,” recorded during sessions for Cohen’s final album, You Want It Darker, Adam enlisted a roster of celebrated singers and musicians to craft the songs on Thanks for the Dance.

Contributors to other songs on the nine-track album, which drops Nov.  22, include Damien Rice, Feist, Beck, Jennifer Warnes, Arcade Fire’s Richard Reed Parry, composer Dustin O’Halloran and the Westmount, Que.-based Shaar Hashomayim choir, whose vocals were one of the core elements on You Want It Darker.

“In composing and arranging the music for his words, we chose [Leonard’s] most characteristic musical signatures, in this way keeping him with us,” Adam Cohen noted in the press release. “What moves me most about the album is the startled response of those who have heard it. ‘Leonard lives,’ they say, one after the other.”

New Leonard Cohen Album, ‘Thanks for the Dance,’ Announced for November

Moses Znaimer On His Friendship with Leonard Cohen