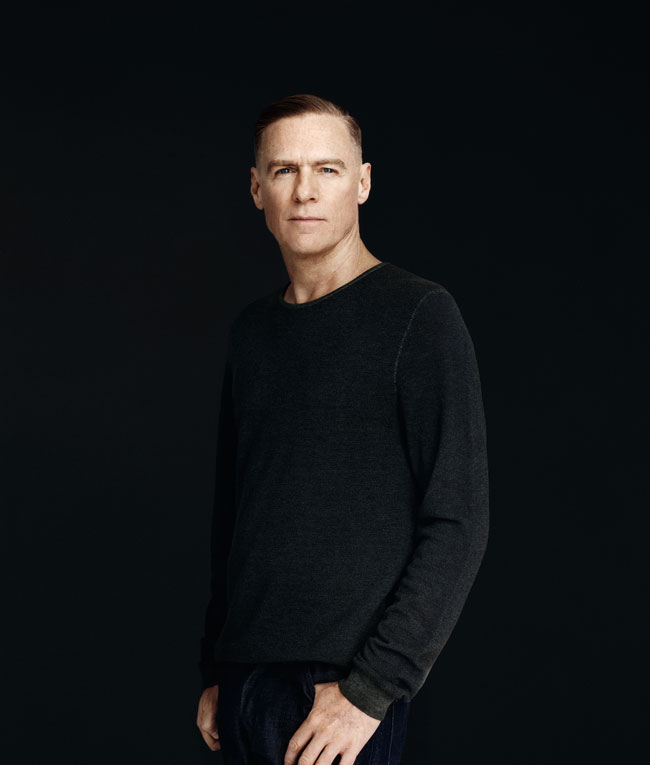 To celebrate Bryan Adams’ 60th birthday, we mined our archives for some of the most powerful images taken by him for the cover and inside pages of Zoomer. Since we hit the newsstands October 2008 with his portrait of Wayne Gretzky, Adams has photographed a who’s who of Canadian icons, including himself, and other global luminaries exclusively for Zoomer.  Click through our slideshow above.

If we’re expected to slow down as we approach age 60, someone forgot to tell Bryan Adams. The forever young Canadian musician, who celebrates the big 6-0 on November 5, is as rockin’ as ever.

This year alone he released his 14th studio album, Shine a Light, which debuted at the top of the Canadian album charts in March and features collaborations with Ed Sheeran and Jennifer Lopez;  revealed in April he helped save a whale by putting his own body between the marine mammal and hunters in an ocean conservation area near his home in St. Vincent and the Grenadines; and published the photography book Bryan Adams: Homeless in May, for which he shot portraits of people living on the streets of London and donated the proceeds to the U.K.-based homelessness charity The Big Issue Foundation. He also found time to photograph celebrities, like Swedish actress Noomi Rapace for Zoo magazine.

All this took place as he travelled the globe on his Shine a Light world tour, which kicked off in January and has taken him across North America, Europe, South America, Australia and New Zealand. And while he’s home to celebrate his 60th birthday, the Grammy and Juno Award-winner hits the road running for the next leg of his world tour in a few days, returning to play concerts across Europe before touching down in Canada to ring in the new year with a concert in Niagara Falls on Dec. 31.

In March, Zoomer interviewed Adams by email about his latest album, where the musician noted that he’s enjoying one of the most creatively fruitful periods of his career.

“Writing music has always been a constant for me, some days better than others of course. However, it’s been a prolific past two years. In fact, I’ve published more music/songs than I did in the first three years of my career,” Adams said. “That includes 20-plus songs from the Broadway musical Pretty Woman [which opened in 2018] two new songs on the Ultimate collection and making the new album with 12 new songs on ‘Shine a Light.’”

MIKE CRISOLAGO: At this point in your career and with your success, is there a sense of anxiousness as the release of a new album approaches or are you more comfortable now in knowing what your fans expect?

BRYAN ADAMS: There is always a massive sense of excitement because it’s not only the release of new music, it’s a new tour and everything that goes along with that. It’s a curious time for artists who have always released CDs, as there aren’t even CD players in cars anymore. But I’ve been around long enough to remember the 45 single and the first CD, so it’s amazing to see it fade like vinyl did. I wonder what will take over from digital.

MC: You collaborated with Ed Sheeran on the album’s title song, “Shine a Light.”

BA: Yes. Ed and I met in Dublin when we both had shows there. I went to see his show, and we kept in contact afterwards on email. I sent him the idea, and he sent me back a verse, and we just carried on for a few weeks on email with ideas. So cool.

MC: You also perform a duet with Jennifer Lopez on another song, “That’s How Strong Our Love Is.”

BA: I’ve always liked singing with people. With Jennifer, I got on my email and sent the song to her manager, who said she loved it and wanted to do it. I like email sometimes.

MC: What do you enjoy most about artistic collaborations, and what do you feel they bring to the album?

BA: They bring some interesting talking points to the album, and truly I believe it is more and more what artists are doing. Look at the rap world; it’s full of songs featuring multiple artists and collaborators.

MC: You headed out on your Shine a Light tour in February. What’s your favourite part about hitting the road and touring at this stage of your career?

BA: I’m actually never really off the road. I’m excited this year, as I’ve partnered with DHL (the shipping company), and they have promised to plant a tree for every ticket sold! So that may be close to a million trees by the end of this year. My hope is more people will take on this type of endorsement. It’s what we all need to do to try and offset the huge carbon footprint created from traveling and everything else.

MC: What do you hope fans and listeners take from this album?

BA: It’s a solid album of original songs — all but the closing song, I
covered the Irish classic “Whiskey in the Jar.” I think I’m in love with Ireland.

Bryan Adams Discs By the Decade