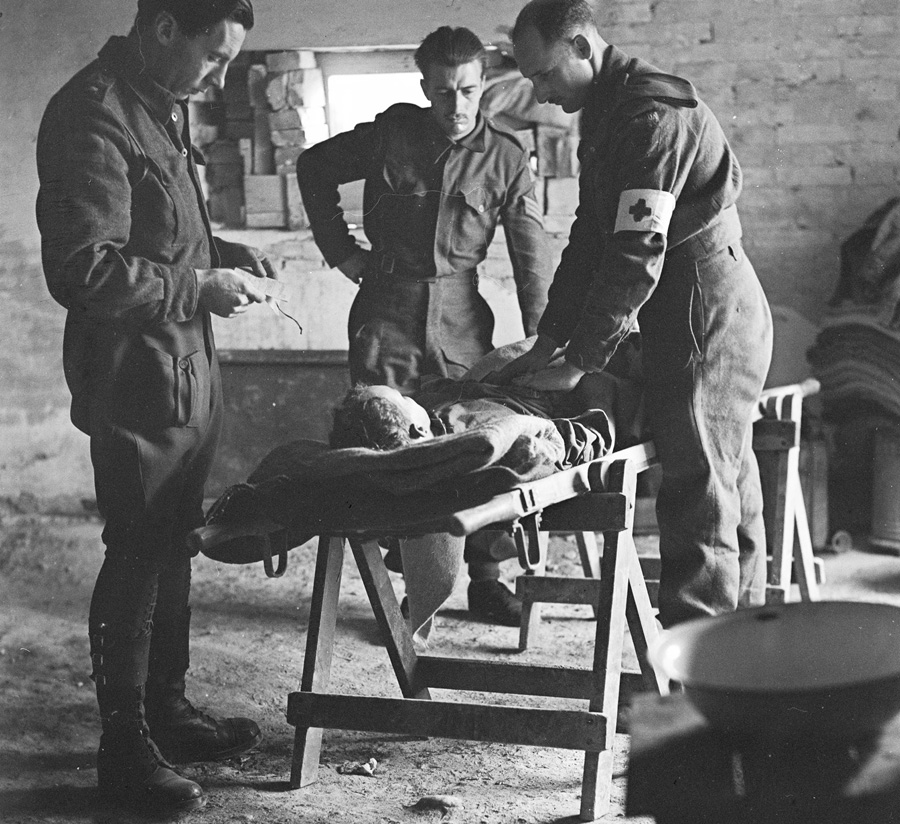 As one of Canada’s preeminent military historians, Ted Barris has written best-selling books on everything from the real “Great Escape” (hint: it’s actually a Canadian story) to the heroic Second World War “Dam Busters” to conflicts in Korea, Europe and the Middle East, wracking up honours like a Veterans’ Affairs Commendation and the Queen Elizabeth II Diamond Jubilee Medal. But in his latest book, the 70-year-old retired journalist and broadcaster returns to the battlefield to chronicle those who put their lives in peril to save the wounded.

In Rush to Danger: Medics in the Line of Fire, Barris examines 150 years of medics in the military — from the American Civil War to ongoing Middle East crises — through extensive research and interviews, gaining insight into why these men and women risk their lives in war zones.

In the process, Barris also unearthed fascinating new information about his father’s role as a medic in the Second World War, which he wrote about for Zoomer.

And after delving into his dad’s war history, Barris spoke with Zoomer about some of the most fascinating stories about war medics he uncovered while writing his book.

TED BARRIS: It’s different because these folks are generally invisible. In all the major [war] stories … it’s always the larger picture, did they win or how badly did they lose? And in all of this, the rushing back and forth, these people who are surgeons, nurses, stretcher bearers, in the United States they call them medical corpsmen or medics, orderlies, dentists, ambulance drivers — all those people are kind of flowing back and forth underneath and no one notices. That’s one of the reasons it’s different. The other reason is that we get it when people say I’m going to fight Hitler or Mussolini or Hirohito or the Communists or the Taliban, but why would somebody sign up to throw herself or himself into shooting, bombing, critical situations when everybody’s going the other way? And that to me was key.

Tells us about some of the stories you came across in writing this book.

TB: One of the most extraordinary was an interview I did with a woman named Alana Gilmore. She’s a modern medic in the Canadian Forces and she was in Afghanistan. And I found out about her because I interviewed the man she saved who later became her husband — Jodie Mitic, an author and a former sniper in the Canadian Forces. In 2007, he’s in his outpost in Afghanistan and he steps on an improvised explosive device and he loses one foot and the other is badly damaged enough, he’ll lose it too. He was a sniper at an outpost [and] the medic, Alana, had to cover a lot of ground to get there. It took her the better part of an hour.

Finally, she’s in a Bison, which is an armed ambulance, and she gets there and it’s her job to get him out to a Black Hawk helicopter to be medevaced out. And she describes the whole process. She calls it muscle memory. I can do this without even thinking — applying bandages, dealing with IV, suction, oxygen. She could do it like riding a bicycle. I said, “What’s the point of that?” She said, “Because I want to be able to use all of my senses to be aware of the environment and other stuff going on. Because I’m sitting in a hostile environment, I don’t know what else is out there. I don’t know who knows what around me and I’m responsible for taking this guy out.” In fact, as we talked, she pulled out a picture of her on the Bison. It’s armed, and she’s sitting on the turret with her hands on the guns. And I said, “What about the Geneva Conventions?” And she said that’s all gone. Medics in modern times are armed.

You wrote a whole chapter in the book around that theme.

TB: Up to and including a wonderful story about a Canadian medic in Normandy right after D-Day. His name is Henry Duffield. And he goes in to Normandy and places his advanced dressing station, which is like a first aid station, at a position he thinks is going to be safe. Anyway, D-Day plus one or two, suddenly the tent in which he has patients flies open and in comes a [German] commander with his weapon drawn. And Duffield’s got a 9mm pistol on his hip with the very ethic we just described, thinking of defending his men. But he’s frozen because the man he’s standing in front of is Kurt Meyer, the German Panzer division commander who ordered or allowed the murder of the Canadians at Ardenne Abbey …  And he goes straight to a German patient and Duffield hears him in German say, “Are you getting the same treatment as the Canadians?” And the guy says “Ja,” and he turns around and leaves. Nothing is said. And Duffield is that far from crapping his drawers.

You wrote about your father’s experience in the Second World War as a medic for Zoomer, which is incredible for many reasons including the fact that he didn’t have a medical background.

TB: The only medical training he had was when he went to the training camp. I mean, he didn’t know anything about medicine. Nothing. When he went to the draft office in 1942, he said, “I’d just as soon not necessarily bear arms.” They said, “Fine, we need medics. Go to become a medic.” And off he goes to Camp Phillip to train as a medic. So he learned on the job.

He learned on the job? And the job in question is the Second World War?

TB: Well, the army is notorious for not putting people whose skills are obvious into the obvious places. My dad used to tell me that some of the guys in his medical corps in the Second World War were firemen. He knew a guy from New York State who was a fireman. And the Air Force was screaming for qualified fireman and yet they made him a medic. And wouldn’t relinquish him to the Air Force for the fire detail. It’s like they think in silos.

What most intrigued you, or inspired you, while writing about army medics?

TB: Probably that basic ethic of rushing there in spite of the bullets and the bombs and the gas to do it … So it’s not like, “Here’s the real story behind the Dam Busters” or “Here’s the real story behind the Great Escape,” which is extraordinary. But equally extraordinary are these people who did miracles and were kind of invisible — including my old man.

Rush to Danger is available in stores and online now.