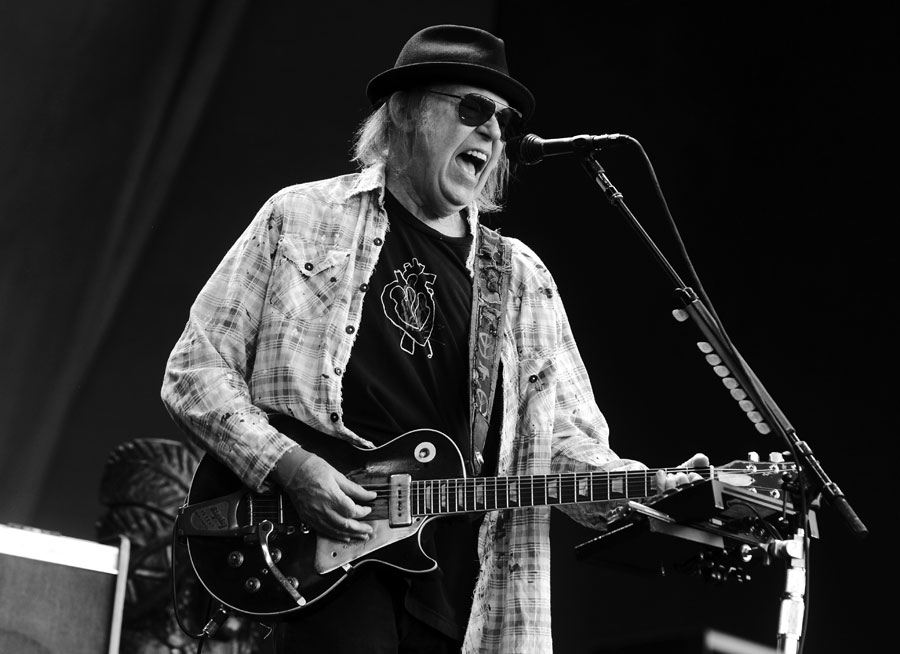 Neil Young, who marks his 74th birthday Tuesday, admits he’s feeling his age these days, but that doesn’t mean he plans on hanging up his guitar.

When  asked whether he had any plans for a farewell tour, the Canadian singing legend summed up his thoughts on retirement with a simple statement: “Don’t retire unless you really aren’t interested.”

“I’m interested. It hurts a little to play now where it didn’t before,” he told AARP in an October interview. “I don’t hear quite as well as I did before. My voice is not like it was before. Show me something that is like it was before. I feel good about the future. The idea is, do not stop moving.”

In fact, Young said he’s moving more and more these days, which has a lot to do with his wife, activist and actress Daryl Hannah, 58.

“She’s very health-oriented, which I never have been,” he said. “Now I’m walking, swimming. Maybe tomorrow morning I’ll be stand-up paddling. I lost between 30 and 35 pounds in six months. Nice that I don’t have to carry that around anymore.”

And while Canadians have happily called him their own since he burst onto the music scene in the 60s, our neighbours to the South aren’t quite so sure about him.

Young revealed Friday that his plans to gain American citizenship were delayed after honestly answering a question about his marijuana use.

In a letter he posted on his website, he told fans he passed the test for citizenship, but he has been called to take an additional test “due to my use of marijuana and how some people who smoke it have a problem.”

An immigration policy that was proposed by former attorney general Jeff Sessions and implemented in April 2019 states: “An applicant who is involved in certain marijuana related activities may lack GMC (Good Moral Character) if found to have violated federal law, even if such activity is not unlawful under applicable state of foreign laws.”

Referencing the policy, Young wrote “I sincerely hope I have exhibited good moral character and will be able to vote my conscience on Donald J. Trump and his fellow American candidates, (as yet un-named).”

At the end of October, the Canadian rock legend was hopeful about obtaining his citizenship, telling the Los Angeles Times that, “I’ve passed all the tests; I’ve got my appointment, and if everything goes as planned, I’ll be taking the oath of citizenship.” Young was hoping to take the oath in November.

Young, who was interviewed at a Santa Monica studio where he and Hannah assembled their new film, “Mountaintop,” documenting the recording of his latest album, “Colorado,” currently lives in America,  pays taxes there and married Hannah, a U.S. citizen, last year. In addition, he’s spent much of his career working in the U.S. and singing about American social and political issues, including in songs like “Ohio,” “Southern Man” and “Alabama.” The latter two tunes famously garnered a response from American rockers Lynyrd Skynyrd who, in their hit tune “Sweet Home Alabama,” responded with the verse, “Well, I heard Mister Young sing about her/Well, I heard ol’ Neil put her down/Well, I hope Neil Young will remember/A Southern man don’t need him around anyhow.”

“We’ve got a climate emergency, and governments are not acting,” he told the Times. He also discussed the theme of climate change on Colorado, his 39th studio album and the first with Crazy Horse since 2012,  in an interview with NPR. “Mostly I would like a lot of people to see what’s going on [with] the planet — that’s so obvious to me. I just don’t know why people don’t get it. Or if they do get it, then why don’t they get with it?”

But perhaps we can give the birthday boy a pass.

Besides, Canuck rock fans needn’t worry that one of our most recognizably Canadian musical exports is turning his back on Canada. While Young is hoping to gain his American citizenship in order to vote, he’s keeping his Canadian citizenship.

“I’m still a Canadian,” he assured the Times. “There’s nothing that can take that away from me.”

The Flannel Renaissance: Mapping the Year of Neil Young