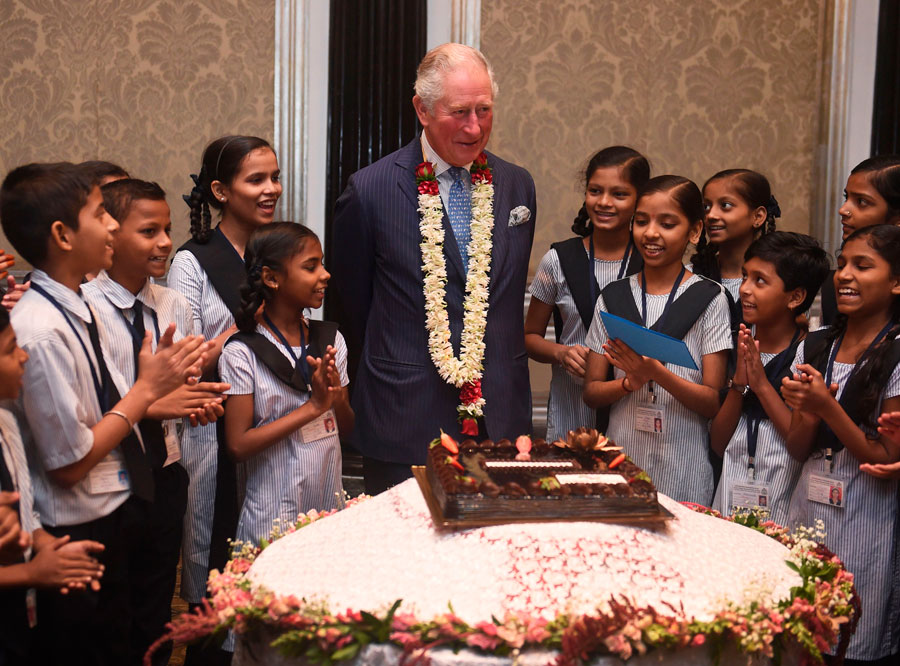 Despite spending his birthday away from family this year, Prince Charles hardly seemed homesick.

The future king, who turns 71 today, was photographed smiling from ear to ear as he celebrated in Mumbai with a group of local schoolchildren whose education is supported by his charitable foundation, the British Asian Trust.

Initially stumped over what to give a prince on his birthday, the children decided on something that represented their culture, presenting him with three bonsai gardens complete with small figurines that tell the story of Hindu deity Krishna.

They also sang “Happy Birthday” to the royal and shared some chocolate cake.

On the home front, Prince Charles’s children made sure the royal knew he was in their thoughts with special birthday messages posted to social media.

“Happy Birthday to His Royal Highness The Prince of Wales – Sir, Pa, Grandpa!”

The candid black and white photo taken at Archie’s christening represents one of the most significant events in a whirlwind year for Prince Charles.

In March, he celebrated his 50th year as the Prince of Wales, which has been marked by a number of new ventures, including work in the area of sustainable fashion.

His partnership with fashion label Vin + Omni, resulted in the release of a spring/summer 2020 collection featuring fabrics made of nettles from the Prince’s Highgrove estate.

He has also advocated for the use of another sustainable fabric through his involvement with the Campaign for Wool.

In Canada, Holt Renfrew partnered with the campaign to launch a collection of limited-edition wool pieces designed by Canadian labels Mikhael Kale, Line and Smythe, which was made available in September.

While his interest in fashion is new, royal watchers will remember that the Prince has long concerned himself with issues related to the environment.

In a BBC documentary marking Prince Charles’ 70th birthday, both William and Harry confirm that their father was significant in fostering their own interest in environmental issues.

“He took us litter-picking when we were young on holidays,” William recalls in the documentary. “We thought this is perfectly normal. Everyone must do it.”

And while the future king has seen his children take on a number of noble causes related to the environment and other social issues, the heir himself continues to find unique ways to make an impact.

Add into the mix his various royal duties, current tour and a possible cameo in the next James Bond film, and 71 is starting to look just as interesting for the future king.

Move Over, Meghan Markle. Prince Charles Has a Fashion Collection, Too – And at London Fashion Week No Less