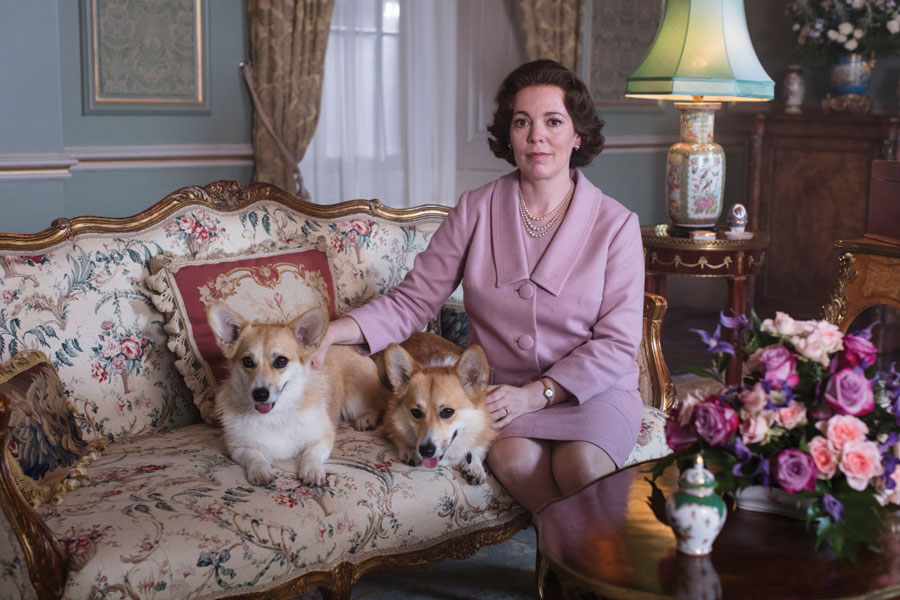 Olivia Colman, who won a 2019 Oscar for her portrayal of Queen Anne in The Favourite, as Elizabeth II. Photo: Courtesy of Netflix

At long last, we have made it to Mustique. Capping off a glorious new season of The Crown, Princess Margaret visits the private Caribbean isle, one whose very name conjures up pictures of heady goings-on under a smouldering sun and is, moreover, synonymous with the jet set she helped define in the ’60s and ’70s.

The occasion for this particular trip by the younger, showier sister of Her Majesty the Queen? Nothing short of a lovey-dovey get-away with boy toy Roddy Llewellyn, a passionate gardener and would-be baron nearly 20 years her junior. (Margaret is played by Helena Bonham Carter this season, who took over the role from Vanessa Kirby, who, like all the principals on the show, is part of an elaborate casting waltz for Season 3.)

“How Margaret Got Her Groove Back” could be the unwritten title for this sequence in the show. Its ripped-from-the-headlines consequences, meanwhile? Many. Owing to this affair — though her tempestuous marriage to Lord Snowdon had long been on the rocks — we are granted a full-blaze, paparazzi-made tempest, long before anyone had caught wind of a Di or a Fergie.

See, too, a chain of events that eventually leads to the first divorce in the British Royal Family since Henry VIII. Because, well, if The Crown has taught us anything, it is this: the private and the public inevitably come together like tea and biscuits.

Helena as Margaret? She more than nimbly slips into her shoes. But really, she does: the camera has an unflinching capacity for grazing upon her vertiginous footwear, driving home the intrepidness of this fashion rebel at the time. Stilettos with shiny buckles. Toe cleavage courtesy of floral numbers. At one point, Margaret dangles a gorgeous satin shoe with a solo finger while trading barbs. In another, we even see her hunched poolside in heels.

The semiotics, they are clear: in a show in which the tale of two very different sisters constitutes a running thread — the heiress and the spare — the heels give contrast to the shoes that the Queen herself dons. Trusty patent pumps, often with a simple clasp, they are a sure-footed emblem of getting on with it.

The focus of the time travelling this time? We get here via a 10-part ellipsis that essentially covers the period between the Labour Party election of Harold Wilson in 1964 (one of 14 — 14! — prime ministers that have served, thus far, at the pleasure of Elizabeth II) and the hoopla encasing the Silver Jubilee in 1977. In the same way Season 2 wove in everything from the Suez Crisis to the assassination of U.S. President John F. Kennedy to the rotting of the empire in Africa, the new season skims through everything from the funeral of Winston Churchill to the doldrums caused by a nationwide mining strike. All the while, it emulsifies the family soap opera — the official investiture of Charles as Prince of Wales, say, and even the arrival of a busty Camilla on the scene.

The show is so crisscrossed with real historical events that it reminds us of other contemporary shows that have dabbled in similar time frames. We half expect both Don Draper and the marvelous Mrs. Maisel to saunter through a scene.

David Bowie, meanwhile, gets a nod, courtesy of Princess Anne (Erin Doherty), who is seen humming along to 1972’s “Starman” at one juncture. At another, we see her listening to Aretha Franklin. Signs and sounds of the time! A young Princess Anne is a whole revelation, by the way: both confident and piquant, while working a kind of mod look at the time — all big hair and short skirts — the actress plays her, as a writer with as The Guardian put it, as “the royal most likely to solve a murder at a dinner party.”

The whole canvas makes it work. Olivia Colman, playing the role of the monarch now, is so, so good. Where her predecessor, Claire Foy, aced playing a tentative queen, a queen learning the ropes, Colman’s Elizabeth is firmly in midstream, the freight of history already in her eyes and a woman who has learned to make her silences work for her. Tobias Menzies, taking on the role of Prince Philip, is, likewise, a natural. He gives good psyche.

Meanwhile, the breakout star of the season in my estimation is Josh O’Connor doing a young Prince Charles in all his rangy posture, exaggerated ears and moony ideas. He absolutely nails it!

Of course, much of the series, like previous seasons, traces the royal tightrope the whole family walks between duty and self-expression, valour and vanity. In one particularly inspired scene — indubitably designed to go into Colman’s Emmy reel — the Queen has a solemn conversation with Prime Minister Wilson where he candidly reminds her, speaking about the British public, “They don’t want you to be normal.” To which she is moved to ask, “So what do they want? Tell me.”

In a monologue that could conceivably operate as a thesis statement for the whole series, Her Majesty goes on: “I favour the Royal Family being kept out of sight, out of mind … for our own survival and sanity. But we have to live in full view all the time. So, what is the answer? The best we have come up with is ritual and mystery because it keeps us hidden while still in plain sight. The smoke and mirrors, the mystery and the protocol, it is not there to keep us apart … it is there to keep us alive.”

Likewise, hitting some of the same top notes, is an episode not long after, set against the backdrop of the fervour of the NASA moon landing and a subsequent all-too-real visit by Neil Armstrong et al. to Buckingham Palace. Prince Philip, finding himself in the mid-life blues to some extent, is seen utterly transfixed by TV footage of the space mission — an awe that also intersects with the spiritual vacuum he has found himself in following the death of his mother.

When the astronauts arrive for the visit and Philip has a chance to privately sit down with the men, it is an awkwardly tense, if not entirely underwhelming, experience. Later, he confides to Elizabeth, “I do not know what I was expecting … them to be giants … gods. But in reality they were just three little men, pale-faced with colds.” Anti-climatic!

It is an irony not lost on the Queen, who knows a thing or two about too much light shone on idols. Astutely, the woman who only became the sovereign as an accident of history and abdication, tells her husband, “They never wanted to be public figures. They have ended up as such. They will spend the rest of their lives in goldfish bowls.”

And because the show liberally plays with echoes of the past, there are also great moments like when the show flashes back to Edward VIII, the king who famously abdicated and is now dying. Charles visits his grand-uncle in exile in France and, forming a bond, clearly sees something of himself in this chronic insider/outsider.

In another past-as-prologue moment this season, we see not-unsubtle corollaries to the present-day Brexit mess the U.K. finds itself in.

Created by Peter Morgan, who also writes the episodes, the show’s ambition is, as he has said, to fill out the spaces between known events, “to join the dots, to find the thread that goes between the pearls.” At the same time, the audience knows they are “not watching a documentary. They are not asking Lucian Freud to paint a picture and then judging it by its closeness to reality. They are asking, ‘What does it stir in me?’”

Consider it the halfway point of this Netflix production, essentially, considering that Morgan originally conceived six seasons of The Crown, moving all the way from the death of George VI in 1952 to the rituals and recriminations of this present age.

Alas, brace yourself, and strike the foreboding Hans Zimmer show theme: next season, the fourth, is when we will face down Margaret Thatcher but also take in the ascent of Diana.

Season 3 of The Crown will premiere on Netflix on Nov. 17.