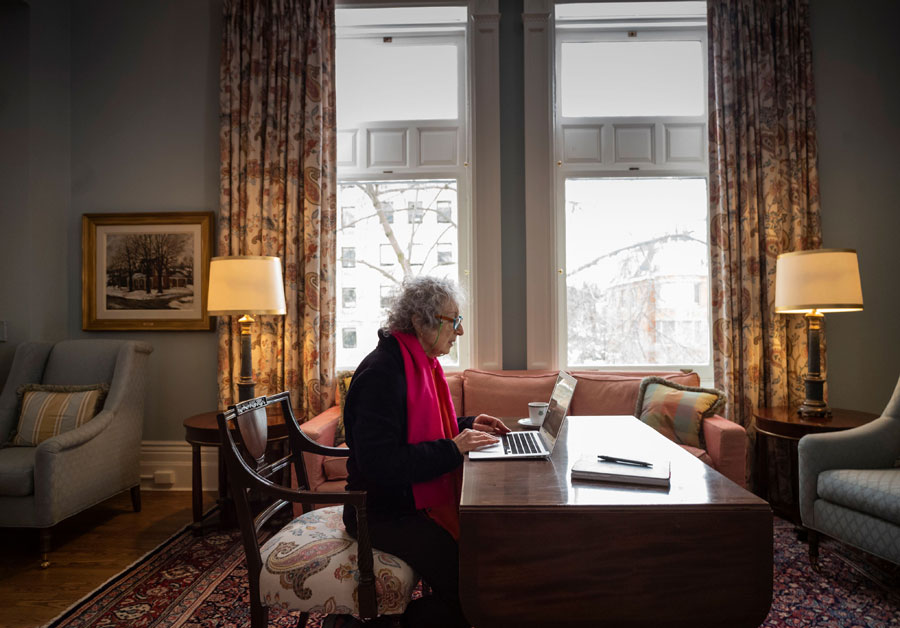 In the new Margaret Atwood documentary, A Word after a Word after a Word is Power, co-directors Peter Raymont and Nancy Lang find Canada’s Queen of Letters sitting at a table making a quill pen out of a feather while discussing how she once had the privilege of using Charles Dickens’ pen.

And with that, a connection is immediately made between the two literary titans — Dickens and Atwood — who lived and wrote more than a century apart, both renowned for their unique characters, best-selling books, social commentary, international appeal and, of course, their impeccable wit. In many ways, Raymont and Lang documenting Atwood’s life for the past year is akin to someone in the 19th century following Dickens around with a camera. What sort of pressure, then, does that put on the filmmakers to get it right?

“I was certainly quite intimidated starting out. She doesn’t suffer fools,” Raymont, an Emmy winner whose work includes films like Genius Within: The Inner Life of Glenn Gould, admits. “So we were kind of nervous going in and wanted to make sure we had done our research and were ready for her and would stay up all night before an interview to prepare.”

Lang, who won a Canadian Screen Award for her work on the doc Painted Land: In Search of the Group of Seven, adds, “She’s used to having less intelligent people around her.”

In the end, the Canuck filmmakers’ fears were allayed. As Raymont notes, “She was very generous and very kind to us and made it all easy … So I think our fears were not really warranted.”

Remarkably, after 80 years, countless awards and a reputation as one of the world’s most beloved and influential writers, no one has ever produced a film about Margaret Atwood’s life. So in A Word after a Word after a Word is Power, viewers are treated to that life story, from her childhood and university years through her early interviews and publishing success to behind the scene access to the television adaptation of The Handmaid’s Tale and an exploration of why Atwood, at 80, remains as relevant as ever. As well, viewers are privy, for the first time in one place, to archival images and footage from throughout Atwood’s life, alongside interviews with fellow authors and friends like former Governor General of Canada Adrienne Clarkson, artist Charles Pachter, Alias Grace director Sarah Polley and The Handmaid’s Tale actress Elisabeth Moss. And it’s already been purchased in the U.S., Australia, across Europe and even in Iran.

The heart of the documentary, however, is Atwood’s relationship with her long time partner, the author Graeme Gibson, who passed away in September at the age of 85. The film, it turned out, chronicled the final year of Gibson’s life, offering insight into the loving romance that the couple enjoyed to the end.

Ahead of the film’s November 19 premiere on The Documentary Channel, filmmakers Raymont and Lang spoke with Zoomer about their experience following Margaret Atwood around the world for a year.

What made this the right time to make a film about Margaret Atwood and Graeme Gibson?

NANCY LANG: Two dear friends of theirs thought it would be a good idea to celebrate them while they’re still here and active and lively. And their significant birthdays were this year in 2019 — Margaret [turns] 80 and Graeme turned 85 in August. So they thought it was a good excuse to celebrate not only their literary work, but also their contributions to cultural life in Canada.

What aspects of working with Margaret made producing this documentary unique?

NL: We first met in the fall of 2017 and what she said to us is that, “It’s fine that you follow myself and Graeme in real time, but I cannot give you an interview until January 2019 because I’m working and finishing a book.” She doesn’t talk about her work while she’s at it. But she was writing The Testaments … But the constraints that gave us opened another door and that meant that we started to look at all of her archival interviews and the rich trove of watching Margaret grow up in her interviews. And we realized it was just a wonderful gift … We saw her as she first started to publish and used those interviews through the film.

In the film, Margaret emerges from a hotel, quipping, “Look! I’m coming out of a hotel! It’s so interesting!”

PETER RAYMONT: What people are “supposed to do” when they’re on camera is walk out of the hotel and turn and walk down the street and pretend that the camera’s not there. Well she doesn’t pretend about anything! Why should she pretend? I asked her what was her earliest memory and she said, “Well I was born in Ottawa, it was a very snowy place, but lets not do a psychological deep dive, Peter.” And we decided to leave that in because it shows her feisty, her fun-loving character. So it was really a very different type of film than anything I’ve ever done before.

NL: And she also wants everyone to understand that her books are her own creation and they’re separate from her personal life. She obviously does draw on her places she knows and experiences she’s had and people she’s met, but those are just a fodder for her books. And I think she wants to ensure people understand that what she writes is not how she lives.

What details about Margaret’s life most interested or surprised you while making this film?

What are your hopes for this film?

NL: We hope that in a way this film will get to particularly young people and remind them of the things that matter to Margaret and Graeme. And I think, whether it be environmental causes or political rights and human rights, those are all things that matter and I hope that the film will encourage them to read her books, look carefully at the things she’s thinking about, and that they’ll need to be vigilant in our lives for human rights and political rights.

What is it that resonates so much with us about Margaret Atwood today and makes her more relevant than ever?

PR: As said in the film, I think by Rick Salutin, she’s got her antennae up all the time to trends, to what’s happening in the world. She’s read history so well she can sort of help us understand the present and the future. So that’s why people are drawn to her — young people especially, I think. Nancy likes to call her a Philosopher Queen.

NL: I look at Margaret as a Philosopher Queen because it’s not only about politics. She thinks about everything in life and how should we lead a good life on moral grounds, political grounds, how we take care of one another. Margaret is a philosopher with a wicked sense of humour. She … writes these brilliant, entertaining novels that are addressing these fundamentals about how we ought to be living. And then through those novels we get to see ourselves. And when we can see ourselves, you can reflect and then react to it and make choices.

Margaret Atwood At 80: Canada’s Queen of Letters Is (Still) At the Top of Her Game