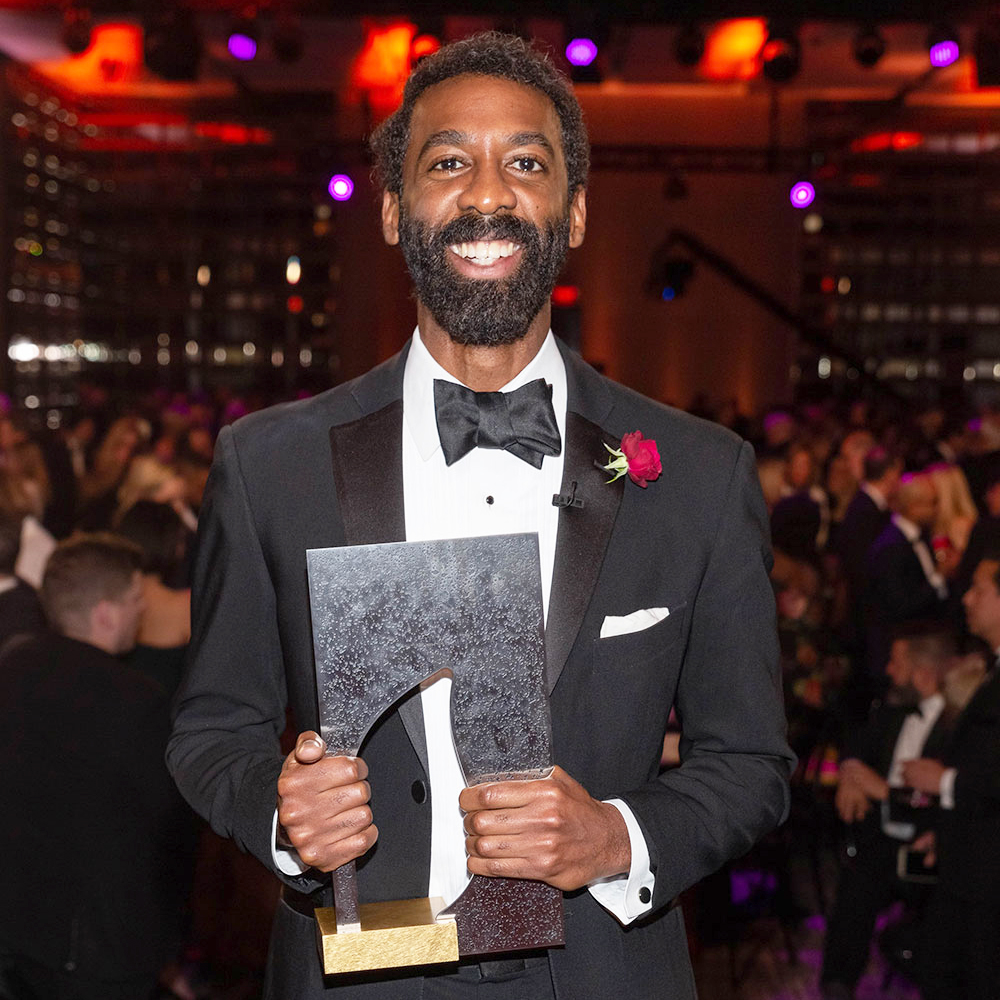 Poet Ian Williams, a native of Brampton. Ont., has won the 2019 Scotiabank Giller Prize for his first novel, Reproduction.

The judges described it as “an engrossing story of disparate people brought together and also a masterful unfolding of unexpected connections and collisions between and across lives otherwise separated by race, class, gender and geography.”

“You have no idea how special this is for me,” said Williams as he accepted the  prize, which comes with a winner’s purse of $100,000 — the richest in Canadian literature. He then acknowledged Margaret Atwood in the audience — who celebrated her 80th birthday Monday — noting that one of her tomes was “the first book I bought with my own money in a book store in Brampton.”

As noted by the Canadian Press, Reproduction “traces the ties that bind a cross-cultural chosen family in Williams’ hometown of Brampton, Ont. … [and] unspools a narrative so entangled it strains against novelistic convention.” The Giller jury called it “a pointed and often playful plotting out of individual and shared stories in the close spaces of hospital rooms, garages, mansions and apartments, and a symphonic performance of resonant and dissonant voices, those of persons wanting to impress persuade, deny, or beguile others, and always trying again.”

Elana Rabinovitch, executive director of the Scotiabank Giller Prize and daughter of founder Jack Rabinovitch, said she couldn’t be happier for Williams. “His novel resonated deeply with the jury, evoking time, place and character that only the best works of art can achieve. I feel confident that this book will continue to find an even larger and more devoted audience across Canada and throughout the world.”

The runners up, who all receive a $10,000 prize, include Immigrant City by David Bezmozgis, Small Game Hunting at the Local Coward Gun Club by Meghan Gail Coles, The Innocents by Michael Crummey, Dual Citizens by Alix Ohlin and Lampedusa by Steven Price.

Canadian singer-songwriter Jann Arden, 57, hosted the Giller gala, which aired live from Toronto’s Four Season’s Hotel on Monday evening, cracking jokes to keep the hour-long show light. “I’d be lying to you, Meghan, if I said I read your book,” she quipped to author Gail Coles early in the broadcast. Later on, she said to Williams about Reproduction: “Ian, holding your book is the closest I’ll ever come to reproduction.” In an author segment where Newfoundland author Michael Crummey introduced his book, he declared: “If you put aside the incest and the cannibalism and the marauding pirates, The Innocents is a pretty standard coming-of-age story.”

Arden also called attention to Atwood’s 80th birthday, serenading the recent Booker Prize winner with a parody of “Happy Birthday.” The newly minted octogenarian also received a special birthday cake, which she revealed in a post on Instagram with the caption, “Surprise cake backstage at the #gillers!”

Your Next Read: 2019 Giller Longlist Announced

Margaret Atwood at 80: Canada’s Queen of Letters is (Still) at the Top of Her Game