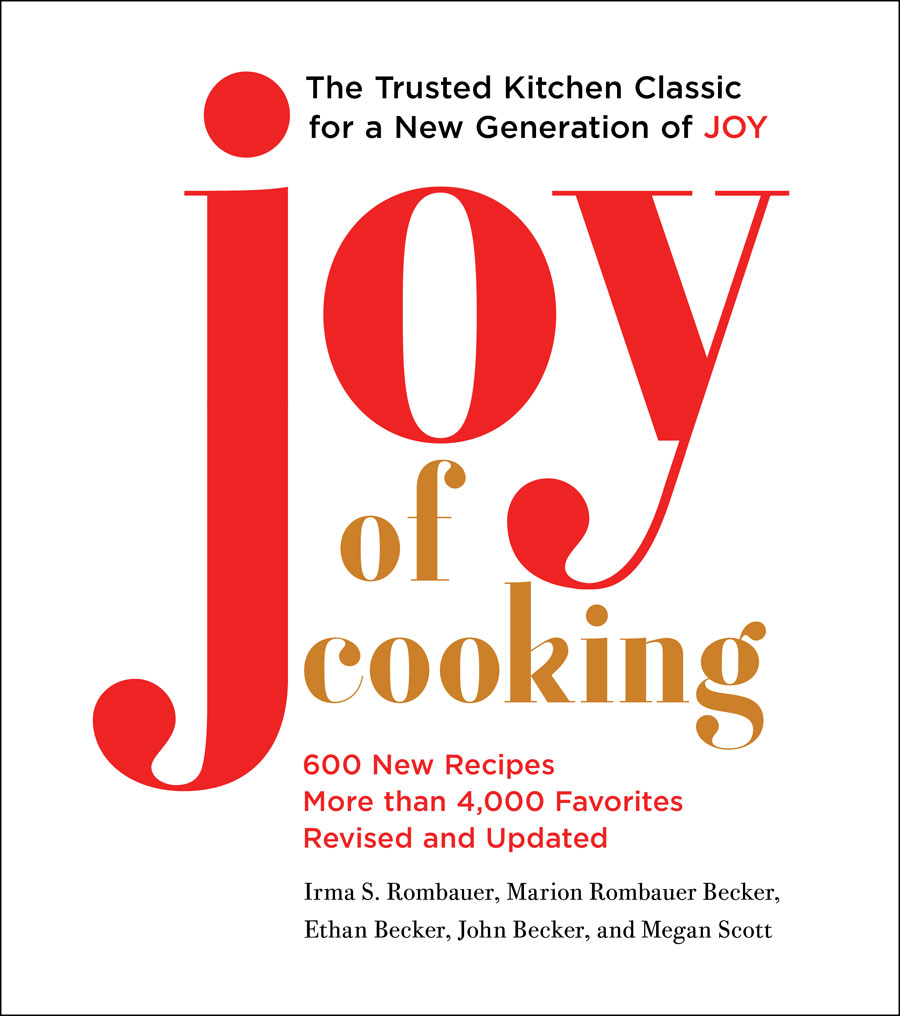 Weighing in at five pounds and covering 1,156 pages, this is the ninth edition since newly widowed St. Louis housewife Irma S. Rombauer spent half her life savings — $3,000 — to self-publish the first cookbook in 1931, two years into the Great Depression.

If that’s a lot of history crammed into one sentence, imagine what Irma’s great-grandson John Becker and his wife, Meghan Scott, faced as they revised the 75th anniversary edition, published in 2006.

They weren’t just tinkering with Irma’s legacy but that of Becker’s grandmother, Marion Rombauer Becker, and his father, Ethan Becker, who had both taken on the task of updating previous editions of Joy.

“We didn’t want to make this into a trendy cookbook that’s going to be out of date in a few years, nor did we want to take it back to the ’50s or ’60s or ’70s,” Scott said in a phone interview from the couple’s home in Portland, Ore., last week. “What we really wanted to do was keep the book true to Irma and Marion’s vision. I think they both envisioned it as a book that would be a friend in the kitchen to home cooks, where you could find the answers to practically all of your cooking-related questions in a nonjudgmental tone and with some humour and wit.”

Hence you will find the aforementioned Shrimp Wiggle referenced in a parenthetical aside in the introduction: “Sadly not reprised in these pages, R.I.P.”

Originally published in Irma’s 1931 edition, the recipe was resurrected for the 75th anniversary edition. Scott describes it as a bechamel sauce made with clam juice and ketchup, mixed with peas and shrimp and served over toast.

“I mean, it’s awful,” said Scott. “So we absolutely got rid of it of that one because it seems like they brought it back for just this kitsch value, which is not something we’re really interested in doing with this edition.”

The couple started going over the 2006 edition line by line six years ago, but Joy of Cooking has been a constant in their relationship since the day they met in Asheville, N.C., in 2010. That’s when Scott, who was talking to a co-worker about how much she loved the cookbook, was surprised to be told “the guy whose family wrote Joy of Cooking” worked at a coffee shop down the street.

“I didn’t think that there was anyone still behind the book, I guess,” Scott said. “It just seemed like there was no author.”

She dropped in, met Becker and, after several conversations, Scott asked him out on a date. Becker was thinking about enrolling in the Culinary Institute of America in New York or California, but “that derailed when Meghan asked me out, and things progressed,” he said.

“Honestly, after a few years testing recipes with Meghan, I actually was really happy that it happened that way.”

That’s because Joy has always been written by home cooks for home cooks, and Becker felt he would have lost touch with what it means to face a dinner party solo in the kitchen with no sous chef or servers to help get the food on the table.

Before they even started working on the revision, Becker, who worked for the family business, and Scott, who has always worked in the food business but also has no professional training, tested 1,500 recipes from the 2006 edition.

When they started working on the update, they read the cookbook line by line three or four times, making outlines of each section and noting what was missing and what they felt should be added in.

“We identified the need for some classic recipes that have not been in the book before,” said Becker. “So, for instance, there’s a St. Louis specialty called Gooey Butter Cake. That’s something that is from Irma’s hometown, and yet we had never had a recipe for it, and that felt a little weird.”

“Ciabatta is another example,” said Scott. “That seemed necessary.”

“Or Chicago-Style Deep-Dish Pizza,” said Becker. “A lot of these American classics that are in the new edition we identified by going through that process and thinking to ourselves, ‘Where can we improve our coverage?’”

The most painful part was figuring out what to cut. They looked at whether a recipe was practical or if there was a desire for, say, Shrimp Wiggle. Turkey Divan was out. The Twin Sandwich was a bit harder, so Becker called his father on that one.

“Sometimes he would passionately defend a dish, but most of the time he was pretty agreeable.” Ethan defended the Twin Sandwich, which Becker described “like a ham and cheese that’s been griddled,” but after Becker and Scott Googled it, they could find no reference online, so it had to go. “I guess the ham and cheese are the twins, but they’re not twins. I don’t get it,” said Becker. “I guess they’re not identical twins,” he joked.

In the end, they sourced, tested and wrote 600 new recipes and kept another 2,520, although the final tally stands at more than 4,000, which includes every variation.

The book pays homage to the Rombauer-Becker canon in countless ways. Look up Rombauer in the index, and you will find Irma’s Prohibition-era recipe for Gin and Juice, which appeared on the opening page of the 1931 edition. “It was a solid formula for polishing the rough edges off illicit bathtub gin,” Becker and Scott write, noting, “It’s even better with decent gin.”

Check the list of classic recipes in the index, and there are more than 70 that have been in the book since 1936. Any with Cockaigne in the title are Marion’s, named after her Connecticut home, a reference to a French poem about a mythical land of plenty. The Beckers are there with Deluxe Eggnog and Mongolian Beef, while Scott’s North Carolina family entered the Joy lexicon by way of her great-grandmother, in Treva’s Pimiento Cheese, and grandmother, in Wanda’s Stewed Cranberry Beans, which she grew up eating every Sunday with corn bread and stewed greens.

Ask what recipes Becker and Scott go to time and time again, and you tease out insider tips. Scott often makes Olive Oil Cake because it’s simple and can be served at any time of the year with whatever fruit is in season, like strawberries or roasted pears. Although the recipe suggests serving it with whipped cream, Scott favours whipped crème fraiche.

Becker goes back to banana bread, one of the most dog-eared and batter-splattered pages in my 1997 edition, which I make from overripe bananas I throw in the freezer. His favourite version includes dried apricots, although Scott splits a whole banana lengthwise and places the two halves cut-side down on top of the batter. “It looks really pretty and it’s just visually interesting,” Becker said, “and obviously more bananas are always good.”

This prompted one of several “we should have included that” moments from Becker and Scott, who said the minute they handed in the manuscript in June, they started making notes for the next edition. In 2031, Joy of Cooking will turn 100, and they plan to do it all over again.

“It’s a family obsession,” said Becker. “We’re definitely obsessed.” When Becker’s mother showed him Marion’s work copy of the 1975 edition, “there were plenty of notes about what she planned on doing. Right after the book was published, she was already thinking ahead.” Marion died of cancer in 1976, and it would be more than 20 years before the eighth edition was published in 1997.

Generations of North Americans have learned to cook with Joy, and Becker, 40, and Scott, 31, are no exception. Becker had his “aha!” moment in high school, when he cooked his first recipe, Caramelized Onions. “I remember being really fascinated just watching the onions reduce down slowly, and all of the sugars caramelizing, and the evaporation and everything,” he said. “At the end of it, I think I ate almost the entire batch just by themselves on some really nice bread and maybe a few dashes of vinegar.” Scott bought the 2006 edition after her first year of college, and the first thing she made was roast chicken. “You learn certain things from your mom, but then you go off and you realize there is just a world of stuff you don’t know, so that’s why I picked up Joy of Cooking.”

My paperback version of Joy, bought the year I moved into my first apartment, disintegrated long ago. Its replacement, the same 1997 version that Becker learned to cook from, has lost its dust cover and the spine is falling apart.

Even though, like many home cooks, I rely heavily on the internet for recipe ideas, I always come back to Joy to check cooking techniques, timing and for basics like Gratin Dauphinois (renamed Potatoes au Gratin/Scalloped Potatoes in the new version), Roasted Turkey, Classic Meat Loaf and Split Pea Soup.

Scott said that’s exactly how they envision Joy being used in the digital age, although they are building a new website, where they will post some classic and newly developed recipes that are not in the new cookbook. “We’re not really here to convert someone who wants to get all their recipes online. We’re a resource that people may use if they want to or not,” she said.

With 15,000 followers on Instagram, Scott noted that Joy has plenty of younger fans (that’s in addition to 82,000 followers on Facebook and more than 8,000 on Twitter). “We completely understand that folks are going to get recipes online. We do, too,” she said. “But we think Joy is a great resource to turn to when you need a solid, thoroughly tested recipe or you have a question about an ingredient or technique that you find conflicting information about online — and you will, trust us.”

That’s why, when my son comes home from university at Christmas, I will press into his hands the 75th anniversary edition I bought him three years ago. It is in pristine condition because it has never been cracked open. Its time is coming. Just last week he asked me, like countless fledglings who have left the nest, for a favourite family recipe.

“To my dear Charlie on your 16th,” the inscription reads. “Hoping you feed many hearts through the years with some food made with love (and may one of them be mine). All my love and pancakes, Mom.”