“The Muses Were With Us:” Adam Cohen Brings Voice of Leonard Cohen Back to Life on ‘Thanks for the Dance’ 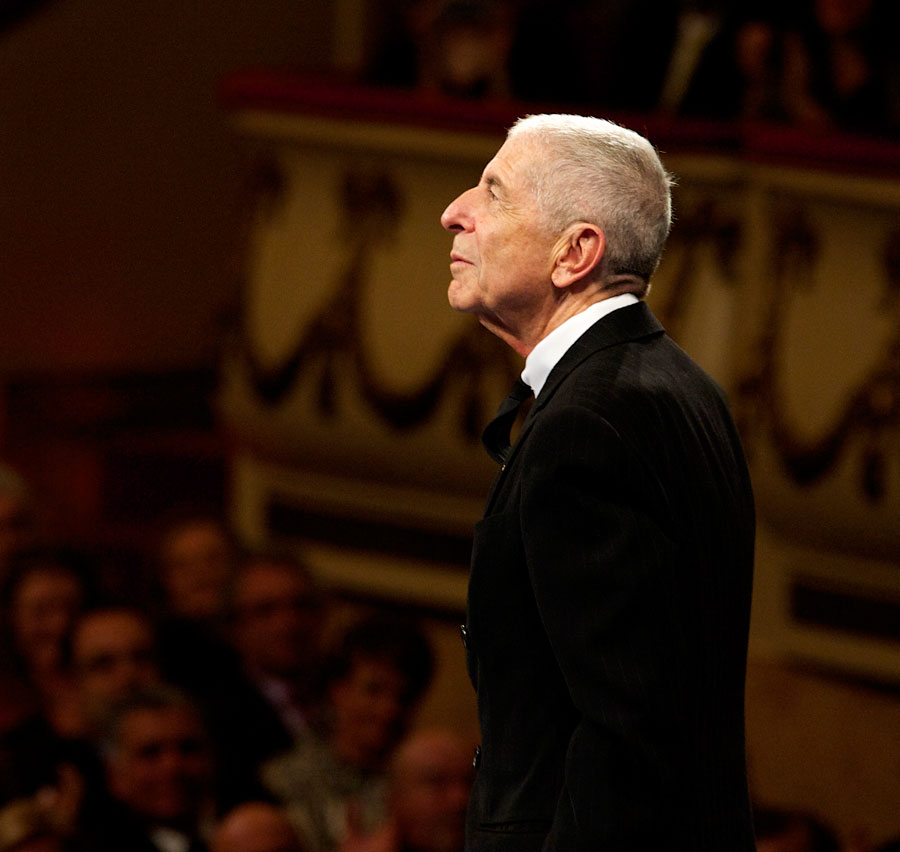 Adam Cohen calls it “the other side of the same goodbye,” referring to the tone and sentiment threading through Thanks for the Dance, a posthumous album from his father, Leonard Cohen. The elder troubadour laid down the vocals during recording sessions for his 2016 album You Want It Darker, released just weeks before he died in November the same year.

“If You Want It Darker is a firm handshake saying goodbye, looking a truth in the eyes, this is Leonard Cohen saying goodbye with his hand on your shoulder, gently,” Adam, 47, says in a phone interview from New York. “This record has a kind of romance and sensuousness that didn’t have a place on You Want It Darker, but these songs had been begun, and then they were never discarded. They just weren’t completed in time. That’s all.”

Adam says Thanks for the Dance is not like other posthumous musical offerings that are rooted in opportunism, exploiting the chance to cash in on a legacy.

“This is a man who was not prolific,” he says of his father. “If he got to the point where he was committing vocals to recordings, the lyric had been vetted and chiselled and re-chiselled, and it was a work of a kind of excellence, and it represented him.

“When you hear the language and the wisdom and the position from the narrator, it’s so old and thunderous and masterful that it needs no explanation for why it exists and why it’s resonant.”

The Communion of Leonard Cohen

While recording and producing You Want It Darker with Leonard in 2016, Adam felt the legendary singer-songwriter, reclining in a medical chair,  knew the completion of his songs would mark the end of his life.

“It was very bittersweet to see him toiling right up to the very last second with a lyric, and to realize that sometimes it wasn’t just his devotion to excellence, that it was his knowledge that as soon as the work was complete, he would no longer have any reason to live. I mean, this was a person who was staying alive to work, to complete, almost out of a sense of tidiness and a lifelong devotion to excellence.”

Before he died, Leonard instructed his son to use the extra vocals recorded during those final sessions to make what became Thanks for the Dance. About seven months after Leonard’s death, Adam returned to his Los Angeles backyard studio in a converted garage to bring his father’s voice back to life.

“It was powerful to be in his company again, to sit with my father, to hear the mastery and pain and wisdom and his thunderous voice coming through my little speakers.” He describes the process as “a kind of communion,” adding that it was part devotional act and part magic.   “It became about how to bring him back to life, almost like a kind of sorcery.”

Adam recalls the first time Spanish guitarist and frequent Leonard Cohen collaborator, Javier Mas, heard one of the recordings. “He said, ‘Oh my god, I never thought I’d get to make music with your papa again.’ And again, this idea of communion, of bringing him back to life, one decision after the other, of remaining in conversation with him through music.”

“There’s something linguistically bizarre about me being my father’s producer,” Adam quips, employing the same dry, sharp wit Leonard Cohen wielded in interviews and, on occasion, in song.

Setting out to create Thanks for the Dance, Adam enlisted a roster of musical talent to bring his father’s vocals to life, including Mas, Damien Rice, Feist, Beck, Jennifer Warnes, Arcade Fire’s Richard Reed Parry, composer Dustin O’Halloran and famed Canadian producer Daniel Lanois. He also enlisted the Westmount, Que.-based Shaar Hashomayim choir, whose vocal arrangements were one of the core elements of the You Want It Darker album.

During the process of creating songs worthy of Leonard’s legacy, Adam says: “It was almost like there was a fedora and a famous blue raincoat on a coat rack next to me at all times, and I would look to it and I would say, ‘Dad, would you like this, would you like that?’ There was constant conversation — does it meet his standards?”

The finished album is unquestionably Leonard Cohen — nine songs that touch on love and fate, light and darkness, art and the end of it all, reverberating with the troubadour’s distinct baritone. His voice is, of course, touched by age, but signs of illness are virtually non-existent. In fact, if you didn’t know Leonard was sick at the time of recording, you would never know from the poignant spoken-word short “The Goal” to the passionate reminiscences of my personal favourite, “The Night of Santiago.”

“I couldn’t have hoped for more,” Adam says. “I think the most satisfying thing that happened when we started sharing these songs, was the surprised faces and reactions that Leonard Cohen was still among us.”

He notes that one song in particular — “Happens to the Heart,” which also happens to be the album’s first single — held special meaning for both son and father. For Leonard, it was a song he had  worked on for years. Adam likens it to the folklore that surrounds the multitude of years and verses that went into writing “Hallelujah,” arguably the singer’s most famous tune. As such, he calls “Happens to the Heart” his father’s “central preoccupation, getting that right” and notes that the finished version on the album, “resembles him and brings him back to life so well.”

For Adam, the song’s meaning goes to the core of the humility that Leonard exhibited throughout his life.

“When he [sings], ‘I was always working steady, but I never called it art,’ there’s no greater example of art and artistry than Leonard Cohen to me, certainly in song. And to end this album by saying, ‘listen to the hummingbird, don’t listen to me,’ also is an act of humility. So that’s something that I wanted to put on display.”

The Grace of the Occasion

When Leonard Cohen performed his final show at the Air Canada Centre (now the Scotiabank Arena) in Toronto in 2013, he returned from intermission and addressed the crowd.

“Thanks so much for not going home. It would be terrible to come out here and find a skating rink.”

Everyone laughed, but the notion that he’d thank us for not leaving always stuck with me — in particular because it seemed so genuine.

I tell this story to Adam, and he says his dad “was touched to know that his work was so resonant … When he takes his hat off at the end of a show and he’s looking bewildered and with gratitude on his face, and he says, ‘Thanks for keeping my songs alive,’ he means it.”

I admit that I’d hoped Leonard knew how much his work meant to his fans, how deeply it resonated. “I think he finally got a glimpse of what his lifetime of devotion to blackening pages was starting to mean. He had not been in it for that aspect of the game,” Adam explains. “He’d been in it to try to, as he called it, get his little toe in the door jamb of the annals of history — poetic history. And to fill stadiums and arenas at the end of his life, to be at the summit of his powers, to have this triumphant and unusual ending, was delicious. He wouldn’t admit to it as freely as I am, but I think it was surprising and delicious.”

But away from the stadiums packed with adoring fans, Adam says he began to view his dad less like a father and more as a lifetime of decisions. He points to a poem Leonard Cohen wrote in his 20s where he said he had, “a mandate from God to go into the darkness and come out for the rest of us with some messages.”

“He had so many distinguishing characteristics that I’ve never found in anyone, including myself, regrettably,” Adam says,. “And so it’s just this deepening appreciation for him and his work, and the person that he was.”

With Thanks for the Dance available in stores and online on Nov. 22 — and related projects, like a new mini-documentary about the making of the album released on YouTube (see below) — the question remains whether this is this the final Leonard Cohen album of original songs.

After all, many fans assumed You Want It Darker would prove to be Leonard’s final words, only to revel in the joy of a new book of poetry, The Flame, in 2018, and now Thanks for the Dance. As far as Adam is concerned, however, this is it.

“No, there are no more new recordings, that’s for sure. He was not a prolific guy. There’s one song I was unable to complete on this album, and I was defeated by it. I couldn’t get it right, I couldn’t get it to a place where I think he would have liked it. And you know, I’ll take another stab at it sometime down the line perhaps, but there’s definitely no new offerings.”

I ask about the time he spent with his father during those final months, weeks and days on that final creative and personal journey.

“There was the grace of the occasion that the muses were with us, that there was creative winds in our sails,” he recalls. “There was the sentimental dimension of working with one’s father. I have had a modest so-called career, and to be invited into such upper chambers was a delicious treat, especially given that it was my father who extended the invitation.”

Adam adds that, despite his father’s delicate condition, “there was a lot of joy, and the person who had always been standing over my shoulder and my notebook was this supportive and loving wise old man, my father. And in this case it was me who was standing over my father’s work, and it was me who had been invited to guide his work towards completion.

“It was a delicious and unexpected turn of events that very much marked me and validated me. You know, to be able to demonstrate to one’s parent one’s capacity and one’s utility is rare.”

Moses Znaimer On His Friendship with Leonard Cohen