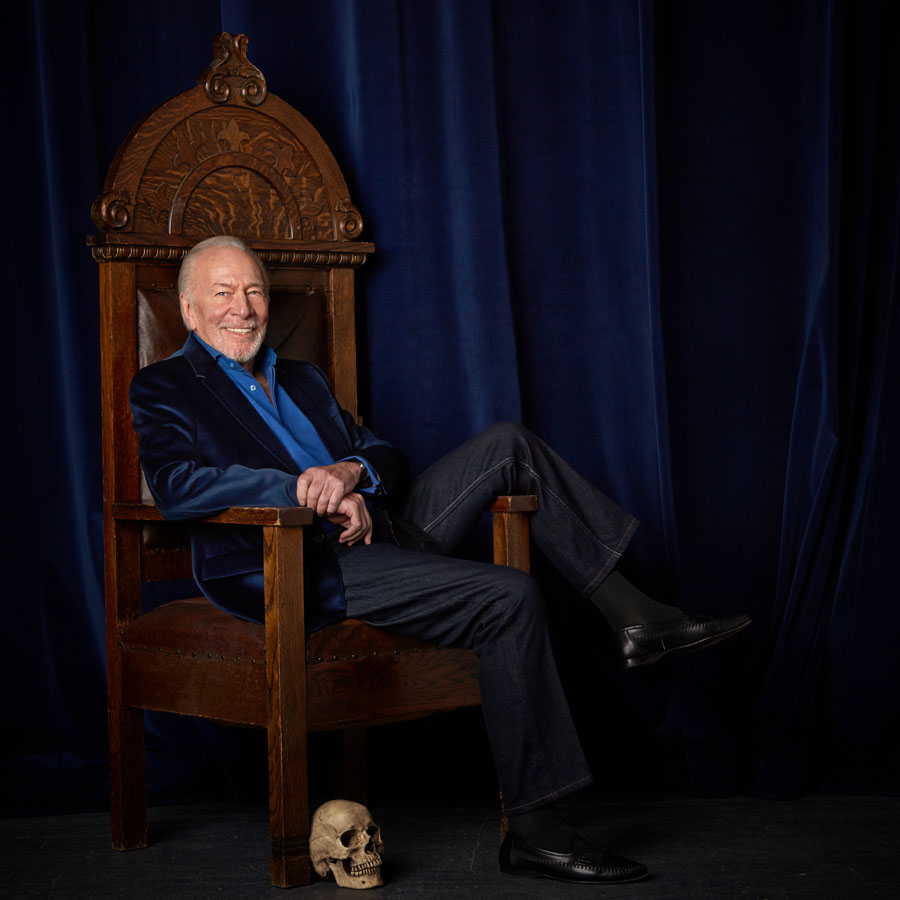 “There’s no time!” I vividly recall Christopher Plummer exclaiming in 2015 after I asked him if he ever considers his own legacy, his voice infused with the sort of bravado that’s defined so many of his most brilliant stage and screen performances. But when Plummer, who turns 90 on December 13, says he’s got no time, he means it. In 2019 alone he filmed or appeared in three movies — Knives Out, which is currently earning critical and award show acclaim, the war drama The Last Full Measure, which hits theatres in early 2020 and Cliffs of Freedom, and independent historical drama. He also played a recurring role in the Canadian-British TV series Departure, lending credence to an interview he recently gave to Parade in which he stated, “No, never retire. Don’t want to. There’s too many wonderful things to do.” With that ethos, it’s no wonder he appeared on the cover of Zoomer magazine twice, most recently in our November 2015 issue. In honour of his 90th birthday, we revisit that cover story below:

“That’s the length of red carpet I want,” Christopher Plummer quips, gesturing toward the short swath of scarlet fabric leading to the entrance of his downtown hotel ahead of the 2015 Toronto International Film Festival. “Can you imagine,” he chuckles, “having a red carpet at home and just practising walking up and down it?”

It’s a joke, sure, but not a bad idea given the succession of professional triumphs Plummer has enjoyed in the last decade – good fortune, in fact, that his own mother once predicted wouldn’t come until his greying years.

“Well, I’m sure she thought it was going to be sooner,” Plummer, 85, laughs as we’re served at the hotel bar, packed with cocktailing patrons unaware of the titan of theatre and screen in their midst. We sit in cushy chairs in an elevated corner of the room – fittingly reminiscent of a stage.

“I’d been successful since I was in my 20s,” he continues, “but a lot of people think that [winning the Oscar] is the be all and the end all. That just comes nicely toward the end of a career.”

Plummer, of course, is referring to his 2012 best supporting actor Academy Award for the film Beginners which, at 82, made him the oldest Oscar winner in history. The last decade also included his first Oscar nomination, again for best supporting actor, in 2010 for The Last Station, celebrated turns on Broadway and at Stratford, a return to his Tony-winning role in the stage and film versions of Barrymore and his popular autobiographical one-man show, A Word or Two.

The most success he’s enjoyed this side of Salzburg, some call it a career renaissance. But not Plummer.

“My whole life in the theatre has been rich, and that’s what counts because that’s where all the great roles are played,” he explains, countering any revival babble. “[On stage] I feel exactly as I did as a child — more so now than in middle age. We’re going back to our senile years. It’s fun.”

He laughs and takes a sip of espresso. Dressed in a light jacket, blue shirt and jeans, he cuts a dashing figure, his piercing gaze and handsome Old Hollywood jawline undercut by his belt, emblazoned with little skulls and crossbones. It’s an accidental, albeit fitting, juxtaposition for a man blessed with matinee idol looks who claims, “There’s nothing more boring than a leading man. I couldn’t wait until I was a character actor in my 40s. The roles immediately got more interesting and more diverse.”

If there’s even the slightest notion of a career renaissance, Plummer traces it back to 1999 and the Michael Mann film The Insider, in which he portrayed legendary 60 Minutes journalist Mike Wallace opposite Al Pacino and Russell Crowe.

“The minute that was out,” he recalls, “the scripts started to come in better written and at a higher level. I had already been doing fairly well as far as good scripts are concerned. And it just was a slow rise.”

“Chris’s career has been absolutely constant,” she declares, playfully snickering at the suggestion of a Plummer comeback. “He was always an incredibly substantial theatre star. Your film career, for whatever reason, because you don’t want to do film for two or three years and then you come back, over a long period of time, fluctuates.”

Plummer’s career, then, is firmly on the upswing. In his current film, Remember, out this month, he portrays a dementia-stricken Holocaust survivor who attempts to hunt down the Nazi guard who killed his family. It’s a performance that earned a 10-minute standing ovation at the Venice Film Festival days before its TIFF premiere.

“I’ve never done anything like that before in my life,” he says of the role. “I felt I was two different men, actually. One that memory loss makes totally anonymous, and the other [a] sort of terrible kind of revenge that stirs the blood and keeps you going.”

“It’s like playing tennis with a great player: you don’t know where the ball is going to go until it lands. And you’d better be there,” screen legend Martin Landau, fellow Oscar-winner and Remember co-star, says of acting opposite Plummer. “Here’s a guy who could play Richard III tomorrow and this character on the day after.”

“I went to visit him at his house, and we were trying to think about how his look should be [in the film]. He had just come out of the shower and his hair was slicked back and he sounded so vulnerable. And I went, ‘Chris, that’s how you have to look.’”

The film itself is significant both for its take on the Holocaust as a modern-day revenge tale as well as for its portrayal of the main character as an older person with dementia.

“For a while, everybody was totally indifferent to the aged and their problems. Now we’re living longer and we’re all on drugs and we’re having a ball,” Plummer laughs. “We’re hiding our age better and threatening to go beyond 100. I think the aged are being looked after better in the theatre and in movies.”

There is one piece of unfinished business, however, that weighs on his mind. Plummer, who studied piano in his youth, plays a classical piece in the film. “Nobody gave me credit for it,” he notes, disappointed, “so the audience will think somebody else played.”

It’s a rare blip in Plummer’s poised demeanour. The opposite end of that spectrum — heartfelt gratitude — shows itself later when his wife, British actress Elaine Taylor, offers a snack. The couple celebrate their 45th wedding anniversary this year. It’s a union Plummer credits as a key influence in both his life and career, from Taylor’s “enormous” artistic taste to her healthy cooking.

“She’s my best friend,” he adds, before spilling the secret of their atypically long Hollywood marriage. “We can part during the day and then get together for dinner and talk about it. We’re not in each other’s pocket. [That] couldn’t be more boring and kills marriages. I’m very lucky.”

Lucky indeed, though there are no plans for a nice, quiet retirement together.

“Nobody retires in our profession. We just go on until we drop,” Plummer insists wryly. “And acting — just learning all those lines helps keep [the brain] alive.”

It’s a process that can, under the right circumstances, breed a certain richness in an artist’s performance, says Canadian actor R.H. Thomson, 67, whose 30-plus years on stage and screen afford him a unique insight into the evolution of an actor’s craft. He recalls, at age 12, being “agog at the panache and the romanticism” of Plummer’s Cyrano de Bergerac at Stratford.

“There is a branch of the artist going through their life that they start stripping away things as they get older, all the dressing and the curlicues and the embellishments, and it just [gets] simpler and more powerful because of it. [That’s] Beethoven’s quartets and that’s late Bach and that’s Tolstoy and I think that’s Christopher as well.”

With retirement out of the question there are more acting projects in the works. “I always look for the next role to be as different as possible from the one I just did.” That includes an upcoming action thriller and a possible remounting of A Word or Two.

Of course, one can’t discuss Plummer’s career without talk inevitably turning to that movie — you know, the blockbuster musical with the children and the “Edelweiss” that he famously spurns. I approach the topic gently.

“Many people,” I ease in, “tend to tip-toe around the subject of The Sound of Music with you.”

“Yeah, quite right,” he shoots back, laughing. “And they should. Sometimes they should tip-toe right out the friggin’ room.”

The film, which Plummer actually praises as “the all-time family movie,” marked its 50th anniversary this year.

“It’s got everything, a wonderful score by Rogers and Hammerstein. I just didn’t think my part was very exciting. When people say, ‘You’re so wonderful in that movie,’ I want to say, ‘Oh piss off.’ They have no idea how I loathed playing that part.”

His co-star Julie Andrews, however, paired with Plummer for a recent Vanity Fair interview and noted, “There were so many potentially cloying possibilities. You were the glue that bonded us all together because you wouldn’t allow that.”

And there’s also irony, which I point out cautiously, in the fact that of all the brilliant performances he’s delivered in the past 70 years, it’s the one he despises most that is best remembered.

“The world saw that movie, and the world doesn’t come to the theatre,” he concedes. “You don’t get that sort of adulation until you do a blockbuster. I’m grateful for it because it enabled me to afford to do things that I wanted to do. [And] a good table at a restaurant.”

The Sound of Music, though, is merely a single role in a career built on noteworthy performances — many of which are documented in his famously candid 2008 autobiography, In Spite of Myself, which reads almost like a history of his craft and the eclectic mix of characters he encountered along the way. Plummer balks, however, when asked if he ever considers his own legacy.

“There’s no time,” he exclaims with a smile, the topic ringing so mundane you’d think I’d asked him about his career renaissance again. “I just keep on doing it. And if it looks like a rather barren year as far as film I’ll go back into theatre. And I’ll write something. And then when I’m not working I play tennis, I play the piano.”

And yet, despite a decades-long career punctuated by standing ovations and artistic honours and the promise of steady work still to come, even Christopher Plummer harbours aspirations from his youth that, so far, remain unfulfilled.

“Well, of course, I always wanted to be a pianist. And I did study, but there’s no time,” he says, regretfully. “I should have done that one 500 years ago. I would have loved to have shared both professions equally, you know. It would have been great.”

Then a coy smile creeps across his face as he thinks back to that one scene in Remember where he tickles the ivories. He laughs.

“I’ve got to make sure that credit goes on the screen.”

Christopher Plummer and Donald Sutherland: A Tale of Two Gettys