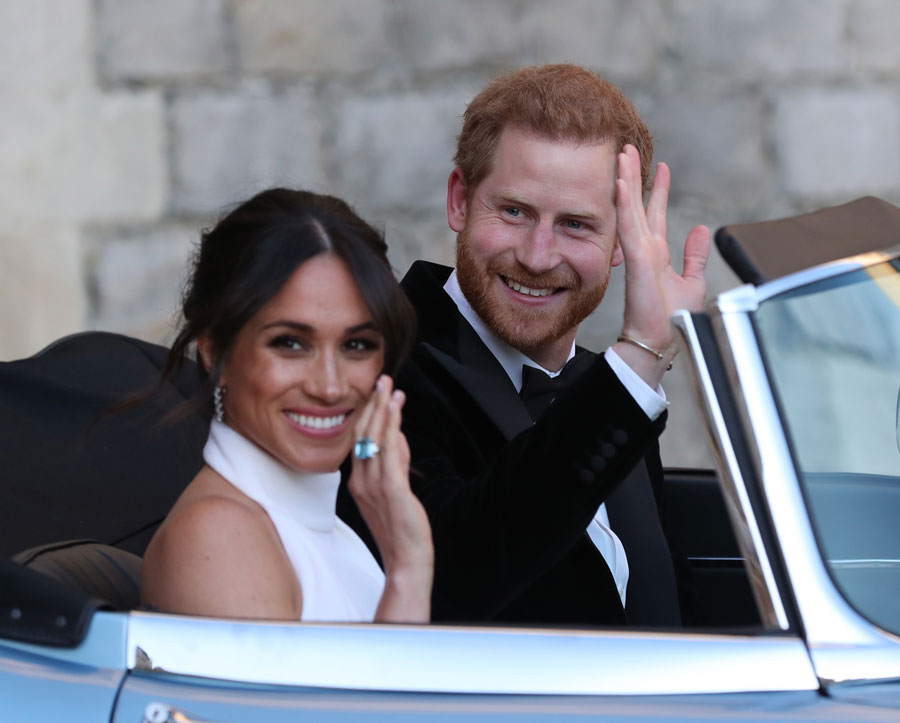 Prince Harry, Duke of Sussex and Meghan, Duchess of Sussex leave Windsor Castle for their wedding reception at Frogmore House on May 19, 2018. Photo: Steve Parsons/WPA Pool/Getty

The Queen’s statement following the Sandringham summit yesterday shows the Royal Family will keep calm and carry on. She is going to acquiesce to Harry and Meghan’s demand to carve out a new role within the family while becoming more independent, which includes a transition period where they will spend some time in Canada.

In a savvy move, the Queen bought some time by promising a resolution to Megxit within days, but couching it in family terms so people could see she’s dealing with this as a grandmother, rather than as a constitutional monarch, which is better for the institution. She’s had a lot of practice, as the Royal Family has weathered many storms over the decades.

Even Harry and Meghan took the message to heart. The day after their surprise announcement blindsided the Queen, as the media frenzy raged, the couple’s @Sussexroyal Instagram account smartly posted pictures of them going about their Royal duties in London to show that, in their minds anyway, it was business as usual.

Perhaps all involved can take solace in the fact that the House of Windsor has actually managed to learn and grow from its messier moments history. It shows that this, too, shall pass and might even strengthen the monarchy for the future.

Here are five Royal scandals that had a silver lining:

This is a tricky one to flip onto the bright side, but in fact, had Edward VIII had not fallen in love and married U.S. divorcee Wallis Simpson in 1936, he could’ve married an eligible young woman from the available pool of nobility, which would have made it more likely that he would have procreated, as was his duty. This would have ensured his heir ascended to the throne, rather than his younger brother, Bertie, who became King George VI. This ensured that his daughter, Queen Elizabeth II, would reign. Now the longest-ruling monarch in history, she has overseen Britain with a steady hand even as it went from empire to island, and was subsumed by the European Union. (Hello, Brexit.) The UK has benefitted greatly from the Queen’s reign, not least from the pomp and circumstance, the pageantry from royal weddings to trooping of the colours that keep the tourist dollars rolling in from all over the world.

The Trouble With Philip

When Prince Philip married into the Royal Family, the love match enchanted the public. It was a rarity because unions among future sovereigns were almost always arranged for dynastic purposes. At first blush, Philip had all the credentials: He was a prince in his own right (since commoners needed not apply until Kate married William in 2011), and in fact he was more royal than Elizabeth herself. Both were great great grandchildren of Queen Victoria, but Elizabeth’s mother was “just” a noblewoman. Philip’s parents were Princess Alice (of Victoria’s line) and Prince Andrew of Greece and Denmark. The family was poor, though, having fled Greece for Paris after a coup when Philip was a toddler. Courtiers and insiders feared he might be a gold-digger, and more than that, not completely loyal to the British Crown. They also feared that his influential uncle, Lord Mountbatten, would try to seize more power through the union. As for Lord Mountbatten, he became Charles’ beloved mentor, and helped shape the character of the future King of England.

In the end, the Duke of Edinburgh, after an adjustment period when Elizabeth came to the throne sooner than expected after the death of her father in 1952, turned into her most loyal and trusted advisor, and now life partner of 72 years. Memories of repeated incidents of politically incorrect comments over decades have faded with time, and now Philip is seen to be the linchpin of the family.

The public already sympathized with Princess Margaret after she was denied permission to marry the dashing and divorced Peter Townsend, an RAF officer and former King’s equerry. She was also beloved for her glamour and ebullient personality. So when she divorced Tony Armstrong-Jones in 1978, despite the national and constitutional self-flagellation that ensued, nothing happened. People accepted a divorced royal despite the official stance of the Church of England at the time. This paved the way for future dissolutions of royal relationships. So while there was great hand-wringing at the time, there was no lasting damage when three of the Queen’s children’s marriages collapsed: Anne divorced in 1992; Andrew and Charles both separated from their wives in 1992, and both divorces were granted in 1996. In 2018, divorcee Meghan Markle was welcomed into the firm, given away at the wedding by Prince Charles himself.

Camilla, The Other Woman

Camilla, who will celebrate 15 years as the Duchess of Cornwall following her marriage to Prince Charles in 2005, persevered through years of public approbation to become an accepted member of the Royal Family. It wasn’t always thus. As Charles’s lover during his marriage to the beloved Diana, Camilla endured public humiliation when the infamous tampon tape was leaked. The papers reported that the younger and more beautiful Diana referred to her as the Rottweiler and she was outed during Diana’s notorious Panorama interview on national television as the other woman.

After Diana’s death, she laid low for a couple of years, and even reportedly needed extra security. Then Camilla was gently introduced into public life until she was accepted enough and it was deemed appropriate for the long-deferred marriage to take place. Now Charles’s happiness has allowed the public to see what he has always seen in Camilla, and the couple has settled into a comfortable relationship where she accepts her support role. When it’s his turn to take the throne, Charles – unlike his grand uncle, who abdicated because he was denied the very same thing – will perform his duties with the woman he loves by his side. Diana, Princess of Wales, presented more than her share of headaches to the Royal Family in her short life. But she also left a legacy that has improved the entire institution for the better. For all the tabloid-stirring drama, most of the major scandals – Squidgygate and Camillagate – all resulted from privacy intrusions from more rabid elements of the UK press. For her part, Diana did unleash her truths – her sorrows, heartache, bulimia and mental health struggles –through her collaboration with writer Andrew Morton in Diana: Her Story. Her 1995 Panorama interview with TV journalist Martin Bashir may be famous for her comment that there were “three of us in the marriage,” but she also cast aspersions on Charles’ fitness to reign, saying, “I would think that the top job, as I call it, would bring enormous limitations to him, and I don’t know whether he could adapt to that.” She also suggested that Charles could be passed over for William, when the time came.

It led the Queen to order the divorce that Diana didn’t want, and strip her of her HRH title. Today, we understand better how desperate she was, isolated and flanked by the “men in grey,” who enforce the palace machinery. But it was Diana’s openhearted emotionality that made her humanitarian work so effective and groundbreaking. The way she reached out and touched AIDS patients, and cuddled poverty-stricken and ill children, and didn’t hide her big, blue, kohl-rimmed eyes welling with tears of empathy: that is her legacy. Today, her sons are completely different in terms of emotional engagement, and more generationally in touch than any royals that came before. Finally, even after Diana’s untimely death, she continued to change the institution. When the people cried out “Show Us You Care,” and “Your People Are Suffering. Speak to Us Ma’am” in the dark days after her 1997 death, the Queen and indeed the entire family listened. That lesson has changed how they have behaved for the better ever since.

As she said of her sons, who she took on many of her humanitarian visits, “I want them to have an understanding of people’s emotions, people’s insecurities, people’s distress, and people’s hopes and dreams.”

Royal Reset: What’s Next as Meghan and Harry Step Away from the Palace