Nostalgia Was a Common Theme at 2020 SAG Awards 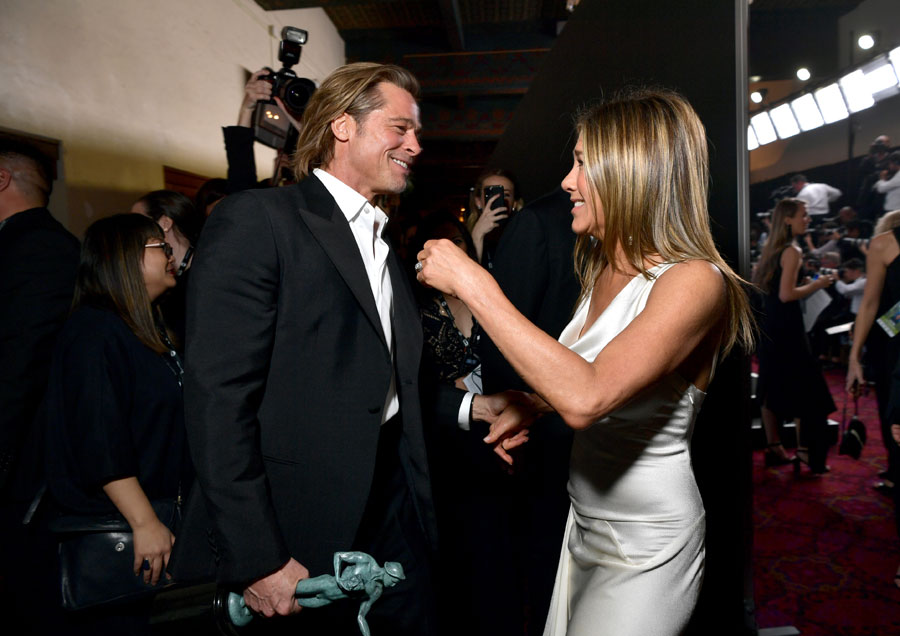 A brief encounter backstage by Hollywood’s former golden couple Brad Pitt and Jennifer Aniston sparked nostalgia for their romance and marriage which ended in a scandalous divorce 15 years ago. Photo: Emma McIntyre/Getty Images for Turner

There are theories about the “whys” of nostalgia. My favourite is from the late Kurt Vonnegut’s novel Timequake, which posits a universe that has stopped expanding and is now contracting, forcing us to relive parts our lives.

At the 26th annual Screen Actors Guild Awards Sunday, almost everything up for grabs had the comfort-food aroma of a simpler time.

Are you a Judy Garland fan? Great. Renee Zellweger won Outstanding Performance by a Female Actor in a Leading Role for her terrific performance as Judy Garland. Why the “car crash” era of Garland’s life made the best narrative is up for debate, but it was one of several nominees on offer that took us back to the ’60s and  ’70s.

At 56, winner Brad Pitt was practically the youngster in his category, Outstanding Performance by a Male Actor in a Supporting Role (only Just Mercy’s Jamie Foxx was younger at 52). And he is on track to also win an Oscar for his role as stuntman Cliff Booth in Once Upon a Time … in Hollywood,  which sees Quentin Tarantino take his “Kill Hitler” act to the 1960s and into the world of the Manson Family — who are, admittedly, not as much comfort food as the whole ’60s aesthetic and vibe the film presents.

At the SAG awards, however, Pitt proved a cross-generational nostalgia figure, even off the screen. When he and ex-wife Jennifer Aniston, 50 — their tabloid-fodder divorce was 15 years ago — were photographed crossing paths after she won the award for Best Actress in a Drama Series for Morning Show, there was a collective social media sigh for what could have been. with entreaties for the two stars to rekindle their romance. Video of Pitt watching Aniston’s acceptance speech backstage also went viral on social media.

The pair’s backstage greeting was reminiscent of their glossy red carpet appearances when they were a couple. A year after their 2000 marriage, Pitt made a guest appearance on Aniston’s hit sitcom Friends, which, if you didn’t know, is riding the current ’90s – the decade when Pitt and Aniston started their obsessively chronicled relationship – nostalgia wave.. In fact, Aniston crashed Instagram in October when she joined the social media platform with a photo of her and the Friends cast, setting a world record by amassing one million followers in just over five hours.

Back at the SAGs, Pitt, delivered his speech with his usual self-deprecating humour, joking that it wasn’t a stretch for him to play “a guy who takes his shirt off, gets high and doesn’t get on with his wife.” Pitt is still in divorce negotiations with his second wife, who he married after Aniston, Angelina Jolie. Aniston was seen clapping along with the rest of the audience.

And all the old Jimmy Hoffa fans from the JFK era got to feel sorry for The Irishman’s Al Pacino as he lost to Pitt (as did Pacino’s cast mate Joe Pesci). Nominations but no trophies either for 1917, Jojo Rabbit and Ford v Ferrari (First World War, Second World War and the ’60s respectively). All of them are movies I recommend.

As for TV, knowing who Lenny Bruce was is practically mandatory for watching Amazon Prime’s great The Marvelous Mrs. Maisel (which won an ensemble prize and an acting award for Tony Shalhoub).

And then there’s FX’s Fosse/Verdon (acting prizes for Michelle Williams and Sam Rockwell). Y’see, kids, Bob Fosse was a legendary choreographer who died 33 years ago and choreographed Cabaret, which starred Judy Garland’s daughter. Gwen Verdon was an actress/dancer and Fosse’s combative muse who won Tonys from the ’50s to the ’60s.

And oh yeah, how can we forget The Crown, the latest season of which spans the ’60s and ’70s?

By the way, these “Guild Awards” – SAG, the Producers Guild and Directors Guild – are the ones you should be paying attention to if you want to win your office Oscar pool. Pitt, Joaquin Phoenix, Zellweger and Laura Dern are all practically money in the bank after last night.

And yes, part of the reason trophies are tossed toward nostalgia-vehicles is because these organizations skew older. Friends of mine in Los Angeles in their early ’60s are often invited to Directors Guild screenings, and they report they’re often the youngest people in the theatre.

But to be fair to SAG (now technically SAG-AFTRA), it has more than 100,000 members, many of whom are quite young and are basically in it for the medical benefit plan (a reality Robert De Niro joked about during his lifetime achievement award speech, though the joke kind of fell flat coming from a rich guy).

So, despite nominees being selected by a committee, the kinds of movies and TV that win are not entirely the result of boomers voting for their past.

Younger votes are likely the reason Bong Joon-ho’s Parasite – in my opinion, the best movie of the year – won Outstanding Performance by a Cast in a Motion Picture. It’s a sly, dark of-the-moment farce about a poor family in Seoul that cons a family of “one per centers.”

The controversial Joker – for which Joaquin Phoenix won Outstanding Performance by a Male Actor in a Leading Role – is cited as another rich-versus-poor allegory, reflecting today’s social tension (though it ostensibly takes place in the ’80s).

And the scabrously funny series Fleabag – for which Phoebe Waller-Bridge won Outstanding Performance by a Female Actor in a Comedy Series – is current and skews younger.

But young or old, this has been a season where awards voters have tended to avoid “downers.” (Maybe the most unsettling movie on the awards circuit has been Uncut Gems, unquestionably Adam Sandler’s best acting performance. But a movie, however well-made, about skeevy characters, greed and violence sounds a little too familiar in the hard and angry era in which we live, and it has received few nominations.)

Had Pitt not won, who knows, the supporting actor award might have gone to Tom Hanks for playing Fred Rogers in A Beautiful Day in the Neighborhood, most of which takes place in the ’90s. That decade is only nostalgic to millennials. But the concept of a man who preached kindness is a relief to wrap our brains around today.

Canada’s Schitt’s Creek was cruelly unrewarded at the podium, though father and son Eugene and Dan Levy were great as quasi-hosts. Their show is comfort food of another sort for those worn down by the era of mean. It takes place in a small town that embraces all races and celebrates gay weddings. It may not be from another time but it might be from another planet.

And for a lot of movie and TV watchers, this clearly feels like a good time to leave this one – if even for a few hours.