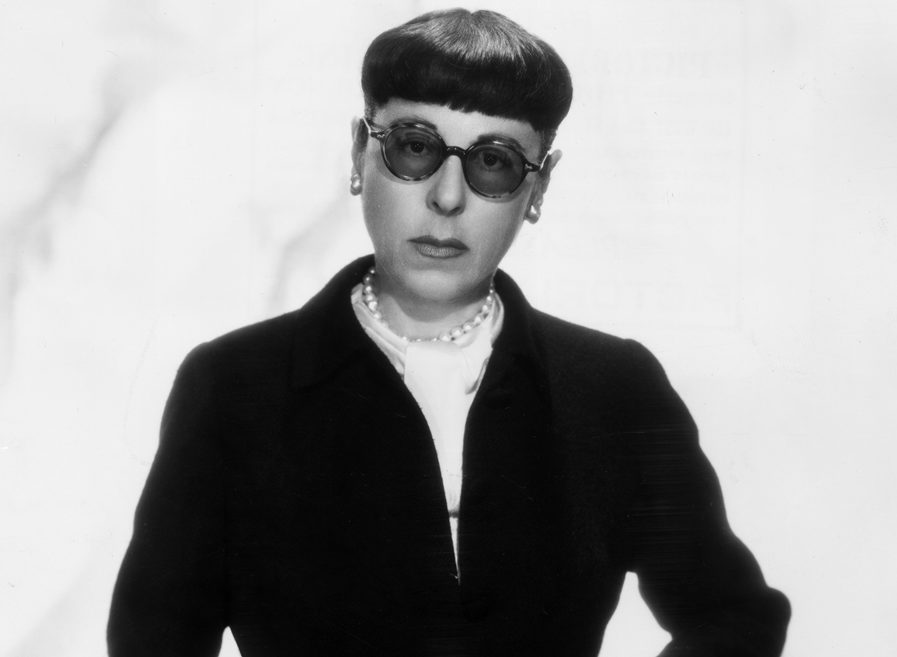 Oscar-winning costume designer Edith Head, who led the Paramount Pictures wardrobe department, is the protagonist in a mystery series set in the Golden Age of Hollywood. Photo: Hulton Archive/Getty Images

By day, Vince and Rosemarie Keenan are a journalist and a health research administrator, respectively. After hours, however, they moonlight writing Hollywood mysteries together under the nom de plume Renee Patrick (the name is an amalgam of Rosemarie’s childhood confirmation name and Vince’s middle name, Patrick).

The Keenans — Rosemarie is 57, Vince is 51 — grew up “completely obsessed with show business” and steeped in Hollywood lore (it’s what they bonded over when they first met, along with a love of classic cocktails).

The inspired twist is that their mysteries are set in the golden age of Hollywood around the Paramount Studios lot, where iconic costume designer Edith Head (winner of eight Academy Awards and dresser of stars like Elizabeth Taylor, Audrey Hepburn and Bette Davis among many others ) presides over the wardrobe department and is ideally positioned to do a little sleuthing on the side. The popular series features an imaginative mix of celebrity cameos and historical fact that bring the lesser-known politics and personalities of the era to life. And along the way, the whodunnits are peppered with landmark locations — from the greasy diner fare at long-defunct Oblath’s off-lot commissary to drinks at legendary Musso & Frank’s Grill, which just marked its centenary.

The 1937-set debut novel Design for Dying (2016) introduced Edith Head and her fictional pal and partner in crime-solving Lillian Frost; follow-up Dangerous to Know (2017) explored the real-life spy ring monitoring Nazi activity in L.A. that the studio moguls funded, with cameos from Dorothy Lamour and Marlene Dietrich. Script for Scandal, out now, opens in the spring of 1939 and concerns an ex-con screenwriter and a historic bank robbery, with appearances that range from Fred MacMurray, Bette Davis, Joan Crawford and Billy Wilder to gangster Benjamin Siegel and his vampy girlfriend-slash-mob courier Virginia Hill.

The series combination of fashion, stardom and crime is catnip for classic cinema lovers so, naturally, the Keenans have appeared as guests on Turner Classic Movies (TCM). The couple recently spoke with Nathalie Atkinson from their home in Seattle, Wash.

How do you choose which of the lesser-known stories from Hollywood’s golden age to base your novels around?

VINCE KEENAN: Every time that we come across something that is basically news to us, we think that’s perfect material for a book. It happened on Dangerous to Know when we first stumbled on the story of George Burns and Jack Benny being indicted on smuggling charges—we’d never heard this before. And the same thing happened with Script for Scandal when we first came across the stories about the jailbird screenwriters. That was just a fascinating set-up for a book.

What sort of research and excursions did you do for Script for Scandal?

ROSEMARIE KEENAN: You do want to see things in person, like when we actually got onto the Paramount lot and saw the wardrobe building. And we love spending time at the [Academy’s] Margaret Herrick library and seeing all of Edith Head’s papers for a certain time period, which they have, or all the production information for a particular film.

VK: We actually picked a Paramount B-movie from 1939 to use as a kind of a guide for our fictional production called Adventure in Diamonds, a movie that has been completely and justly forgotten. Its file had everything you would want to know about how to build a movie on this budget — including ostrich races.

Edith Head was a rare female executive and was not shy about putting herself in the media, yet she remains somewhat a mysterious figure.

VK: Which is why getting the chance to look at her papers was so insightful because she did control her image very carefully. We always say the best costume that she designed was the one she designed for herself. But when you look at her papers, you actually get the insights into how funny she was, the depth of her marriage to [art director] Bill Ihnen, which will be coming up pretty soon in the [series] timeline. You see sides of her reflected in those papers that she took care to hide from everybody else.

RK: In photos, she’s always looking very stern, not a lot of smiles, but in her papers there are all these sweet notes between her and her husband and funny remarks in letters, so we know she had a sense of humour, besides being very politically savvy.

There’s been major upheaval in Hollywood even since the series debuted in 2016, with revelations and movements against sexual harassment like #MeToo and #TimesUp. Do you think you’ll be tackling more of those themes?

RK: I remember when all the #MeToo stuff was coming up and thinking back to Design for Dying. We had put a character telling the story of going to a photographer who had a hook in the corner for her to hang her dress on, and how she just got out of there. It’s always been fraught for women in Hollywood, ever since the beginning. But maybe not talked about so much. By doing this female-centric history of Hollywood, where women talk to each other all the time about it, I can see us bringing it up more and dealing with it head on, depending on the story.

Are we in a golden age for stories concerning the truth about Hollywood history?

RK: I think there are so many good books coming out, good people doing the research and digging into the reality of it and not just looking through fan magazines and accepting that’s how it was.

VK: So many of these stories that have been ignored in the past because there were certain preconceived narratives that everybody was following. It was a lot of white male researchers telling these stories, I feel like a lot of this is coming out now. And non-fiction, I think, is definitely experiencing a golden age. There’s obviously a lot of fiction, a lot of TV series that are touching on this, too. But I’d like to see some of fictional treatments of Hollywood get a little more grit and go more in-depth than what we’ve seen so far.

You’ve previously introduced movies on TCM. If you did it again for Script for Scandal, what double-bill would capture the mood of the book?

RK: The Women (1939). We need a costume picture from the banner year of 1939, one that has women front and centre as the title indicates. It’s got a wonderful mix of humour and glamour, which we try to balance in the books, and there’s something about that delirious Technicolor fashion show plonked down in the middle of it that puts us in mind of Howard Greer’s salon.

VK: Stranger on the Third Floor (1940). It’s the definitive proto-noir and a model for Streetlight Story, the [fictional] movie in Script for Scandal. It was made by an emigré director, applying the techniques of German Expressionism to an American crime story, and it’s a great demonstration of the ingenuity the best B-movie makers had, achieving powerful effects on a limited budget through imagination and artistry.