Entrepreneur Fulfils Dream to Conduct a Symphony at 70 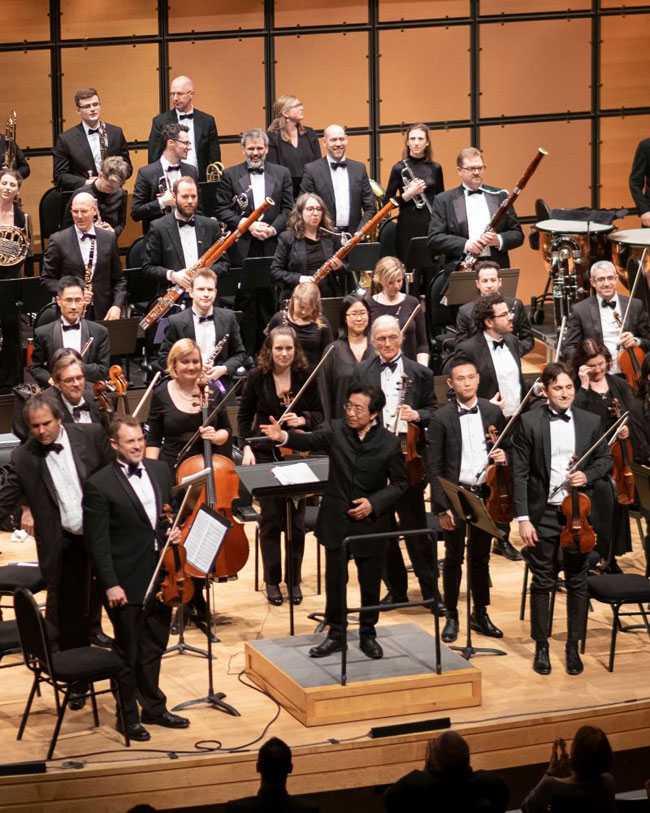 Toronto tech entrepreneur Mandle Cheung, 72, had a dream to conduct an orchestra playing Mahler, which he fulfilled in November 2018. Here he leads the Mandle Philharmonic through Symphony No. 1 in March 2019. Photo: Courtesy of Ajay Bajaj

When some people with money turn 70, they want to see the wonders of the world. Others want to winter in warm places and play golf. Toronto tech entrepreneur Mandle Cheung had a burning desire to lead a symphony orchestra in a performance of Mahler, one of the most challenging composers to conduct.

And so the wealthy tech entrepreneur, who grew up in a non-musical family in Hong Kong, put together and paid an orchestra of 100 professional musicians to perform Mahler’s Symphony No. 4 in November 2018 for 200 paying guests. Then he reconvened the Mandle Philharmonic to tackle Mahler’s Symphony No. 1 in March 2019.

Now, at 72, he’s ready to step up on the podium for a third time Saturday night at George Weston Hall in North York to lead the Mandle Philharmonic in Brahms’ Symphony No. 1 in C minor Op. 68, Beethoven’s Piano Concerto No. 5 in E-flat major Op. 73 with young South Korean pianist Sae Yoon Chon and, in celebration of the Chinese Lunar New Year, the Spring Festival Overture.

Cheung explains his conducting gigs not only fulfill a fantasy, they feed a need to keep active and learning. “I need something for my brain,” he says. “It needs to be occupied or I get really bored. Travelling is good, but even going to a beach, I want to learn. I go crazy if I just lie on a beach.”

While Mahler is Cheung’s first love, this time he decided to program a concert of romantic classics, “crowd pleasers to get a bigger audience” — bigger than the 200 people who came to see him conducting Mahler the first time.

“I’m extremely nervous,” he admitted after a rehearsal this week. After all, Cheung has only tried conducting in a few music courses he took when he was studying computer science at the University of Manitoba. About 50 years went by before he picked up the baton again. He’s self-taught and relies on the musicians of the Mandle Philharmonic to help him learn the score.

“I ask the musicians to point out things to me,” he says, admitting that it usually works the other way around between conductor and orchestra. “It took them a while to get comfortable with that.”

He’s been rehearsing for Saturday’s concert twice a week for a few months. That means paying union rates for each professional musician for each rehearsal: $48 an hour for rehearsals and $64 an hour for the concert. He paid a contractor to hire them and says they’re all first-rate. His total cost for making the concert happen is about $300,000, according to his media and marketing assistant. He’s sold about 1,000 tickets so far at $17 each, although they are available online for half-price and $9 for seniors and children.

“When I first started, I didn’t even know about unions,” Cheung says, “so that was challenging.”

Cheung was 13 when he first encountered classical music: a Saint-Saens violin concerto on the radio. “I was hooked on music ever since,” he says. But he spent the next 50 years building a career in computer science, and is now the founder, CEO and sole owner of ComputerTalk, a 32-year old cloud computing business with 100 employees.

“Making a living takes work,” he says. “Building a business was a huge challenge. But I have a team of amazing people at ComputerTalk. I make the high-level decisions and the team makes it happen. The business is growing constantly and it freed up some capital for me.”

He started thinking it was time to make his move into conducting about five years ago. “I started reaching out to people, to community orchestras. I sat next to their conductors at rehearsals. That’s how it began.”

He insists it’s never too late to try something new, even something as formidable as conducting Mahler, Beethoven or Brahms. “I refuse to accept that 70s are old. Every time somebody says, ‘Oh, I thought you were in your 60s or 50s,’ I say, ‘Yes.’

The key to his success is that he doesn’t give up. “I keep learning until I know enough to make it happen. I make mistakes and learn from my mistakes and how can I do it better.”

And so, even though he is nervous about his third concert, he’s also really excited and really thankful. “It’s been a wonderful journey,” he says. “I love every moment.”