From Hollywood Star to Monument to Icon, Kirk Douglas Oozed Masculinity and Charisma 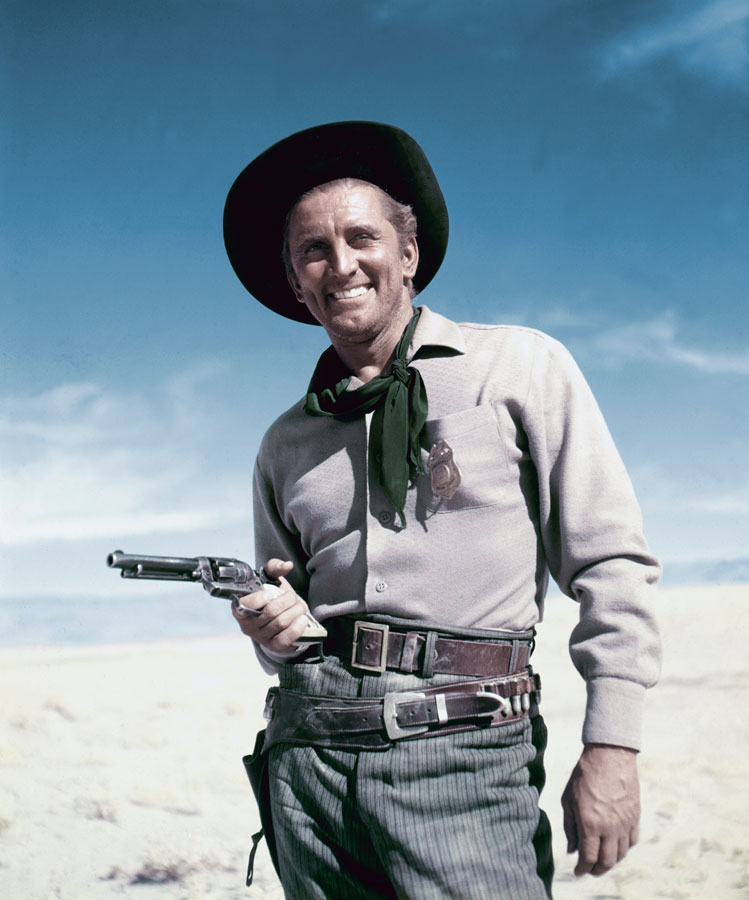 Kirk Douglas on the set of the 1951 film Along the Great Divide, directed by Raoul Walsh. Photo: Warner Bros. Pictures/Sunset Boulevard/Getty Images

When a legendary movie star like Kirk Douglas dies at the age of 103, it’s certainly the end of something, but of what? Early obituaries have called him “the last great star of Hollywood’s golden age” and “Hollywood’s tough guy.”

The first is technically untrue, since Gone with the Wind’s Olivia de Havilland, also 103, is still alive. The second is a half-truth. Though he was an icon of masculinity, Douglas’s famous, oft-repeated quote was, “When I play a strong guy, I try to find, where is he weak? And, conversely, when I play a weak guy, where is he strong?”

As a child of the ‘60s, Kirk Douglas will live on in my memory in black and white, because I discovered the “golden age” late at night in my room on a 20-inch, black-and-white TV.

My real entry into film came from the archives that financially strapped Hollywood studios sold to networks and affiliates as filler, as well as “public domain” films that showed up on TV.

Cinematography was kind of hidden in the curved CRT screen and often fuzzy reception. Soundtrack? On those tinny speakers? But acting and charisma, that burst through that primitive filter and blew my young mind.

That’s where I first saw the meat of Kirk Douglas’s career, as the lead in Stanley Kubrick’s Spartacus (1960), of course, and also his robust take on the troubled life of Vincent van Gogh in Vincent Minnelli’s Lust for Life (1956), which earned him one of three Oscar nominations in his career.

I was barely old enough to grasp what “cool” meant when I saw Michael Curtiz’s Young Man with a Horn (1950), where Douglas played a jazz trumpeter who had a glorious rise and ignominious fall. There were three great cynical films about the media in that era, The Sweet Smell of Success (with Burt Lancaster and Douglas’s Spartacus co-star, Tony Curtis), A Face in the Crowd (with Andy Griffith as a better villain than he was TV dad), both from 1957, and 1951’s Ace in the Hole, about an opportunistic journalist who exploits a man trapped in a cave, inadvertently creating a media circus.

And some will consider this heresy, but I liked 1957’s Gunfight at the O.K. Corral, with Lancaster as Wyatt Earp and Douglas as Doc Holliday, more than Henry Fonda’s 1946 version, My Darling Clementine.

By my teens, Douglas was a middle-aged monument essentially playing Kirk Douglas, who was being immortalized in the impressions of comics like Frank Gorshin. He’d appear in entertaining ‘70s and ’80s popcorn films like The Final Countdown and the bizarre sci-fi film Saturn Three (with Douglas, then 72, and Farrah Fawcett, 33, as a couple in space), a cheesy adaptation of Jacqueline Susann’s Once is Not Enough, and an Arthur Hailey mini-series, The Moneychangers.

Then he’d do something head turning like 1982’s The Man from Snowy River, the Australian Western where he played two characters, which reminded us that he was a movie star.

Years later, my career would take me into the lives of these living monuments. What was it like to be the son of a pop-culture icon? I interviewed Michael Douglas multiple times over the years, and felt his intense pursuit of success as a TV star, Oscar-winning producer for One Flew Over the Cuckoo’s Nest and movie star was his response to living in his dad’s shadow. Like Kirk, Michael also had a lifelong reputation as a womanizer.

On the other hand, I spent an entire uncomfortable evening with Michael’s morose half-brother Eric Douglas, who eventually died of an overdose, and who was clearly under the influence the night I interviewed him when he performed at a Toronto comedy club. His routine included a bitter “bit” about being the undersized son of Spartacus.

It was kind of sobering to see Kirk Douglas as a centenarian at the 2018 Golden Globes, in his wheelchair, still suffering the effects of a 1996 stroke. There were people who felt it was cruel to bring him on for that appearance.

But he was game, and apparently compos mentis despite his slurred speech. It could be the complaints were more about the viewers, who were reminded that even the most vibrant and muscular of men are mortal.

Kirk Douglas: The Fascinating Life of a Hollywood Legend

7 Famous People Who Lived To Reach 100