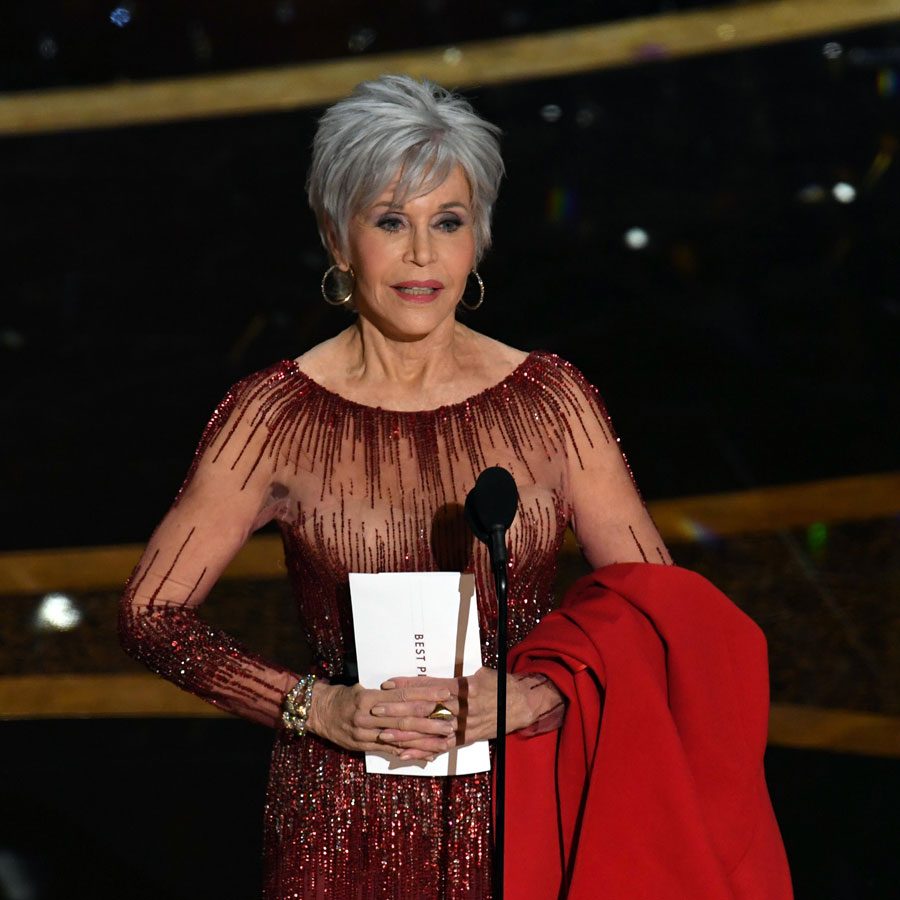 If you think the biggest surprise at the Oscars last night was the sweep by Parasite, a South Korean film and the first foreign language film to take Best Picture, you are so wrong.

The biggest shocker was Jane Fonda’s locks, not just shorn into a pixie but — dramatic pause here for gasp — no longer blond.

The 82-year-old actress, activist, author and poster girl for gracious aging came out with grey hair — and I do mean “came out,” and I don’t mean just on stage.

Her Los Angeles colourist, Jack Martin, revealed on a long post-Oscar Instagram post that Fonda’s real colour — in other words, her roots — is salt-and-pepper. Martin says he bleached about three inches of roots.

“I had the honour and the pleasure to transform the legendary actress Jane Fonda hair especially for the 2020 Oscars,” Martin wrote on Instagram (@jackmartincolorist). “Spending seven hours with this amazing Hollywood star and witnessing her energy, beauty, strength and femininity was so inspiring.”

He also detailed the tedious seven-hour process by which he turned Fonda of Hollywood into Elsa of Arendelle.

And like Elsa’s famous crowning glory, Fonda’s hair is not technically grey. It’s ice — a “silver icy blond,” according to Martin.

But that didn’t stop thousands of tweets and comments congratulating the actress on her decision to go grey.

“One of my favourite ladies, Jane Fonda, has embraced her SILVER and I love it!” one wrote.

Another wrote, “Wow, look at the short hair and hair colour. She looks stunning, and I’m so happy she has embraced her grey hair.”

Fonda recycled the same red dress she wore at the 2014 Cannes Film Festival, with the same red coat she wore last year at the Oscars when she vowed it would be the last piece of clothing she’d buy — and, not incidentally, the same red coat she wears when she’s out on the streets protesting about the environment. Fonda spent the last months of 2019 and, not incidentally, her 82nd birthday, in Washington, D.C., leading a campaign of civil disobedience, Fire Drill Fridays, to force movement on climate change. She was arrested five times, led away in handcuffs and that red coat.

Fonda even chose her “bling” responsibly for her Oscar look, wearing an assortment of jewelry from Pomellato, a company that specializes in responsible, ethically harvested gold and sustainable diamonds.

But the difference in her look was stunning.

Gone were the wavy blond curls framing her face above that coat last year and that red dress in 2014, replaced by a smooth silver pixie do.

In his tweet, Martin described the shorn blond locks as “a little tired warm golden blonde.”

So is silver the new gold? It sure looks that way.

Fonda isn’t the first client who has come to Martin to forfeit her gold — in every sense of the words. At Martin’s full-service hair salon in Tustin, Calif., the cost for colour is US$200 and up — way up for a seven-hour complicated service like Fonda’s.

Martin has made switching women’s tresses from gold to silver his calling.
An article in a year ago in Modern Salon lauded Martin for his success in taking women on the journey into greyness.

“Each time we pull up our Instagram feed and see a transformation that helps a client embrace her grey, if it has thousands of comments, reactions and likes, it’s almost always from Jack Martin.

“One quick look at his body of work and it’s clear that he’s carved out an incredible spot for himself as the go-to guy for clients ready to embrace and blend their grey.

“Martin’s clients drive for MILES to have his colour work help them on their grey journey – and it’s no surprise. His attention to detail and total customization create results with impact and major life change.”

Fonda has been a trendsetter in so many ways and made so many life changes, transforming from Roger Vadim’s Sexpot to Hanoi Jane to Aerobics Jane to Trophy Wife to Ted Turner Jane to sitcom Grace that it’s no surprise that she’s right out there and up there with a do that proclaims arriving at a certain age with style and pizzazz.

Still, let us not forget that she’s not the first Hollywood celeb to make this statement.

Jamie Lee Curtis made the silver pixie her trademark years ago. But with Fonda making this attention-getting “major life change” so prominently at the Oscars, can we expect a rush to salons everywhere for Fonda-Elsa hair?

Is it time for women of a certain age to forgo the ingenue style, with those long curls, tired warm gold or otherwise, artfully arranged to grace one’s poitrine? Silver pixie (and recycled clothes), here we come!