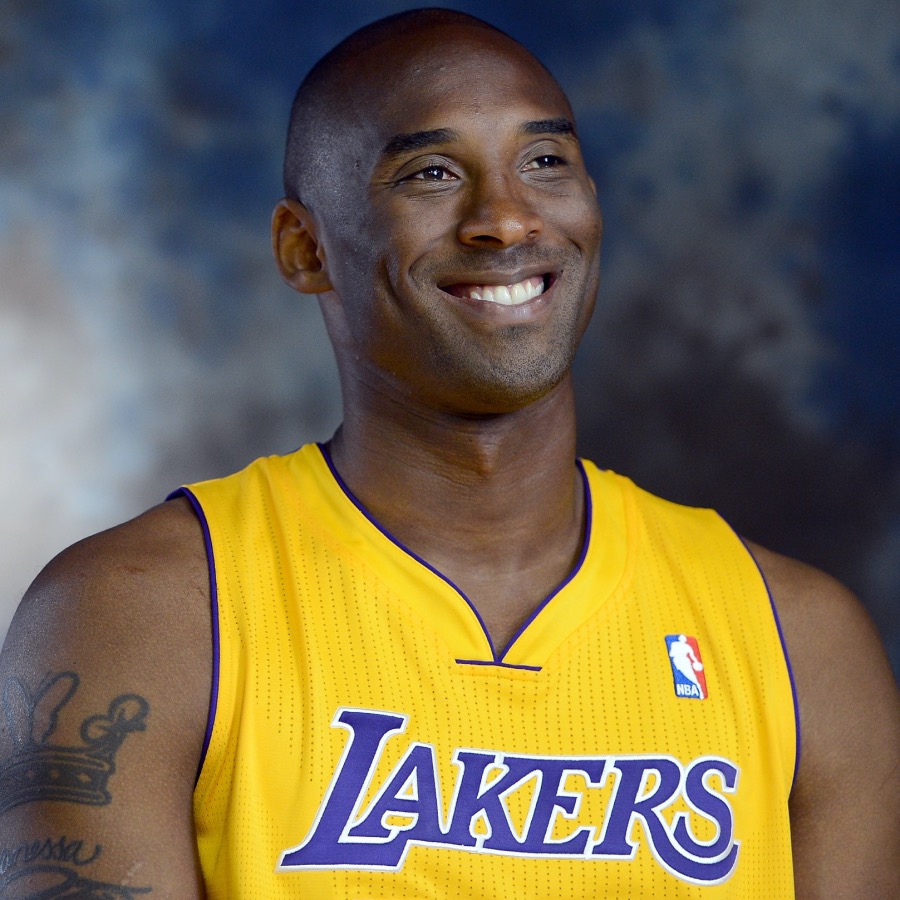 Monday, August 24th marks the first ever Kobe Bryant Day — a memorial day initiated by the City of Los Angeles, where he played for his entire NBA career. Photo: Harry How/Getty Images

Monday, August 24th marks the first ever Kobe Bryant Day — a date chosen for the numbers eight (August) and 24 (the 24th) that he wore and initiated by the City of Los Angeles, where he played for his entire NBA career. In honour of the late star, we’re revisiting the story of his life and legacy — and the roster of sports and entertainment luminaries that came out to pay their respects at his memorial — that originally ran on February 24, 2020.

Basketball fans or not, everyone seemed paralyzed contemplating the sudden loss of one of the greatest Los Angeles Laker star players. That he was only 41 when he died last month in a helicopter crash that took the life of his daughter Gianna (“Gigi’”) and seven others made the loss more distressing.

“It’s going to be hard for the city to move on,” said NBA Hall of Famer and fellow Laker great Magic Johnson. “… because he’s just bigger than life. It’ll take a long year to get over his passing and [his] daughter and the seven other people who lost their lives as well.”

Today, the arena where Kobe enthralled so many fans, famed Lakers past and present joined Hollywood entertainers, politicians and millions of Los Angelenos in bidding a fond farewell to their adopted son.

Beyonce, wearing a Laker gold suit, kicked off the event by singing Kobe’s favourite song XO, urging the fans to sing along, before moving on to a rendition of Halo.

Late-night TV talk-show host Jimmy Kimmel, who emceed the event, delivered a moving eulogy where he fought back tears saying “Everywhere you go, you see his face, his number. Gigi’s face, Gigi’s number.”

Vanessa Bryant, Kobe’s grieving widow, expressed her thanks for the “outpouring of love” she has felt from people around the world for the passing of her daughter and husband. “Gigi was sunshine. She brightened up my day everyday,” she recalled tearfully. “She was a beautiful, kind, happy, silly thoughtful, loving daughter and sister. She was so full of life, and has so much more to offer this world. I cannot imagine life without her.”

As the memorial went on, a convergence of basketball greats — including Bill Russell, Kareem-Abdul Jabbar, Magic Johnson, Jerry West and Shaquille O’Neal — and the entertainment industry — including Kayne West and the Kardashians, Jennifer Lopez and Alex Rodriguez, Alicia Keyes, Snoop Dogg — all paid their respects to Kobe, the person and the player.

Michael Jordan gave a unique glimpse into his relationship with the Laker star, saying Kobe was like a “little brother” to him. “He wanted to be the best basketball player that he could be. And as I got to know him, I wanted to be the best big brother that I could be. Even when he’s being a pain in the ass … he’ll bring out the best in you. Please rest in peace, little brother.”

Not every player merits a grand send off like this in Lakerland. To earn it, you must leave a legacy that can compete with all the great players who have worn purple and gold – one-named legends like Magic, Kareem, Worthy, Wilt, Baylor, West and current star LeBron. And for Tinsletown to go into full mourning, you must exude style and flair befitting of all the entertainment luminaries who have left their mark on this town.

When he retired, Kobe had achieved his place in the Laker pantheon.

But back in 1996, when this 18-year-old rookie right out of high school, being dubbed the next great Laker must have been a daunting prospect. But Kobe never once flinched in this role or doubted that he could fulfill his destiny largely because he had the full package of physical and mental tools to make it happen.

The basketball gods certainly helped when they created Kobe. Six foot, six inches; quick, lithe and muscular — the perfect physical attributes needed to become one of the top shooting guards to ever play in the NBA.

Complementing his overwhelming physical gifts, Kobe was one strong-willed SOB with an unquenchable passion to win, complemented by an extraordinary work ethic, which exhibited itself in the weight room.

That competitiveness and drive on the court became known as the mamba mentality, derived from Black Mamba, a poisonous snake that Kobe nicknamed his on-court persona after.

“When I step on that court, I become that. I am that killer snake. I’m stone cold, man,” Bryant said of the name in a 2015 interview with Ahmad Rashad.

That killer instinct endured throughout his career, especially in the crucial moments. He would never pass up a big shot and, when it inevitably went in, he would exude that supremely confident air great ones have. Moreover, he demanded excellence of himself and his teammates. Many times he would direct a death stare to a teammate who dared to mess up an assignment or give a half-hearted effort.

His scoring feats, alone, were outrageous. In one memorable outing, he scored 81 points against the Toronto Raptors, the second highest point total of all-time. In another, he poured in 62 against the Dallas Mavericks. When he left that game in the third quarter, he had outscored the entire Mavericks team. And despite being hobbled by wonky knees, he managed to go out in a blaze of glory, scoring 60 points in his final game against the Utah Jazz.

But the stat sheet never told the whole story about Kobe. He had all the fiercely competitive mindset and fiery passion of a winner. Along with Shaquille O’Neill and under the guidance of Zen master coach Phil Jackson, the Lakers captured three championships. When Kobe and Shaq famously fell out, and the latter was traded to Miami in 2004, Kobe proved to everyone out there he didn’t need the big guy to succeed, leading the Lakers to two more championships.

Although he was just getting started on his second act before he died, Kobe’s post-retirement occupations adopted the same intensive, hard-working qualities that made him a basketball star. After a difficult period involving a sexual assault case, which was later dismissed, Kobe focussed on being a better husband and father.

He took an intense interest in his daughter Gigi’s basketball career and coached her as she rose through the ranks. He also became a tireless promoter of the WNBA and its effort to expand women’s opportunity in basketball. He opened the Mamba Academy, an elite sports facility to train the next generation of athletes “the Mamba way.”

“I love telling stories. I love inspiring kids or providing them with tools that are going to help them,” he explained as the reason behind launching Granity Studios, a company that produced multi-media content aimed at educating and inspiring young children. And, adapting to zeitgeist of the city he called home, he wrote and narrated Dear Basketball, an Academy Award-winning animated film based on a poem he wrote about retiring from the game.

His business interests were many and varied, including venture capital (that invested in tech and media funds), expansive business interests in China (where he had a reality show) and his burgeoning entertainment company. By 2016, he had climbed to No. 33 on the list of America’s 40 Richest Entrepreneurs Under 40, with a net worth of $350 million.

A basketball player extraordinaire, a passionate competitor, a successful businessman and budding entertainer, he immersed himself into the culture of L.A. But above all, Kobe was a true Los Angles Laker, part of the franchise’s extraordinary legacy of winning teams and players that dates back to 1960 when the team relocated from Minneapolis.

Led by Hall-of-Famers like shooting guard Jerry West (the Kobe of his era), forward Elgin Baylor and Wilt Chamberlain, perhaps the most dominant offensive players of all time, many readers will remember how those early Lakers cemented their place in the Los Angeles sports scene.

Then came the “Showtime” Lakers of the 1980s, led by the slick-haired coach Pat Riley, who moulded a team that would eventually capture five titles. These Lakers were stocked larger-than-life personalities: Magic Johnson, the always smiling offensive wizard; Kareem Abdul-Jabbar, the glowering, unstoppable scoring and rebounding machine; and James Worthy, with his impossibly smooth above-the-rim game. With charisma galore, a fast-paced style and a championship calibre team, Hollywood fell in love with the Lakers, spawning the era of athlete as celebrity. Back then, the Fabulous Forum, where the Showtime Lakers played their home games, became a gathering place for all the entertainment industry big shots. Every game, the camera would pan the crowd seeking a worthy celebrity, often stopping on Jack Nicholson, a courtside regular who became synonymous with that team.

Kobe’s achievements make him a worthy heir to both of all these legendary basketball teams. His star will forever shine down on L.A., as brightly as any of the great Lakers, past or present. And his name will forever be linked to those who helped create this enduringly transcendent franchise.

Today, as fans said a final goodbye to their beloved hero, they broke into chants of “Kobe,” “Kobe,” “Kobe” loud enough to fill the space of that cavernous arena, perhaps even reach the great basketball court in the sky.