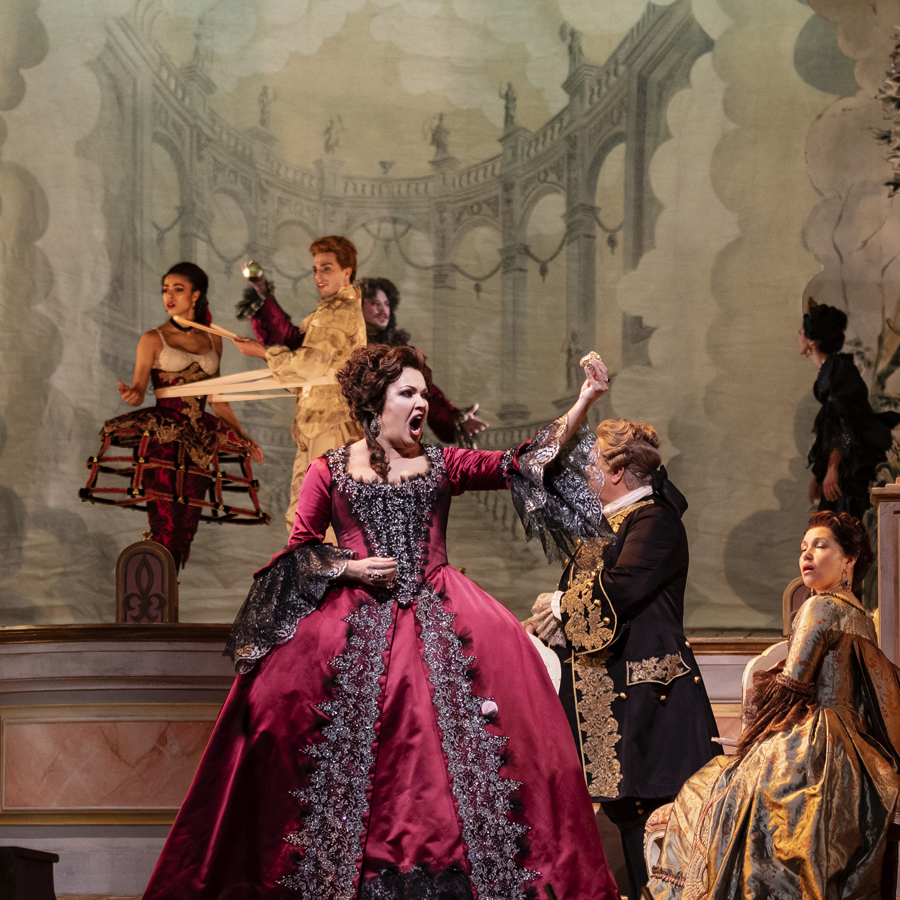 Russian soprano Anna Netrebko (centre) performs in the Metropolitan Opera’s production of 'Adriana Lecouvreaur' in New York in 2018. Many opera houses around the world are making performances from their archives available via their websites while live shows are shut down during the COVID-19 outbreak. Photo: Jack Vartoogian/Getty Images

In a recent op-ed for the Globe and Mail, Toronto Symphony Orchestra CEO Matthew Loden mused on the COVID-19 pandemic and the important role the arts play in times of crisis.

“When people want to come together, to reflect on or escape from the quotidian, they seek the glue of art to help focus their emotions,” he wrote. “Art offers a conduit for a shared experience that works beyond what conversation and words alone can provide, and it makes it easier to sit next to the different.”

And as many artists and art institutions — from concert tours and museums to theatres and symphonies — shutter amid the ongoing pandemic, they’re popping up online in virtual form. So while you’re self-isolating at home, help brush off the boredom and depression during the COVID-19 pandemic by getting an arts and culture fix online.

On March 16, the day after she was set to receive her induction into the Canadian Music Hall of Fame at the cancelled Juno Awards, Canuck singer Jann Arden performed a digital concert for her fans on Facebook.

Since then a number of other artists — many of whom have had concert tours delayed or cancelled because of the outbreak — are taking to social media to do the same during the COVID-19 outbreak.

Canuck rocker Bryan Adams has taken to his Instagram account to solicit song requests from fans using the hashtag #songsfromisolation. As of this writing he’s performed three acoustic tunes on the social media site: John Lennon’s “Isolation,”  followed by Bob Marley’s “Natural Mystic” and George Harrison’s “All Things Must Pass.”

Meanwhile, fellow Canadian singer/songwriter Jim Cuddy, 64, kicked off a new online concert series called #CanadaPerforms, a joint initiative between the National Arts Centre and Facebook Canada that supports Canadian musicians through digital concerts and a $100,000 relief fund for those who’ve had to cancel live shows amid the COVID-19 outbreak. Cuddy performed the first concert in the series on March 19 alongside his sons Devin Cuddy and Sam Polley and Blue Rodeo guitarist and bandmate Colin Cripps, on the National Arts Centre’s Facebook page.

Canadian music legend, Neil Young, 74, announced a new Fireside Sessions online concert series set to stream for subscribers on his Neil Young Archives site and on social media (though not Facebook). Filmed by his wife, actress Daryl Hannah, the first session, in support of U.S. presidential candidate-hopeful Bernie Sanders, is available to view on Twitter.

As well, famed Cape Breton fiddler Ashley MacIsaac, 45, is staging a quarantine ceilidh — a ceilidh being a festival of traditional Irish or Scottish song, dance and storytelling — on his website and social media channels on April 1 to help people dealing with social isolation.

And who could forget Gloria Gaynor singing “I Will Survive” on TikTok as part of her #IWillSurviveChallenge to get people to wash their hands properly?

In fact, performers from Keith Urban to Coldplay, Pink and John Legend have joined in the trend, so keep an eye on your favourite singer’s/band’s social media accounts for updates on future virtual performances during the COVID-19 outbreak.

A number of symphony and opera companies are also bringing digital performances to fans. The Berlin Philharmonic, for one, is offering free concerts from its archive through March 31 (click on the voucher on the site to redeem the offer) while the Boston Symphony Orchestra will present musical content via its website and Youtube channel. Meanwhile, the Vienna State Opera is offering an opera a day for free from its archives, as New York’s Metropolitan Opera and Palermo’s Teatro Massimo offer similar options for fans.

Toronto’s Tapestry Opera also announced that it will be streaming a full recital of its cancelled public performance of Songbook X’s Krisztina Szabó and Chris Foley in a livestream concert on its Youtube channel on Saturday, March 21 at 8 p.m. ET.

The Canadian Opera Company, meanwhile, is starting an #OperaAtHome initiative, sharing a clip from various COC operas once a day on its social media platforms, but there’s no word if it or the Toronto Symphony Orchestra will offer free streaming of shows from their archives.

Other opera houses and symphonies are also offering digital access, and NPR put together a handy March calendar that includes many of them.

Like with your favourite singers/bands, check in with opera and symphony social media accounts and websites for news on upcoming digital shows.

And for fans of live theatre, BroadwayHD offers a free seven-day trial to stream productions from the Great White Way. As well, the Digital Theatre website offers stage classics from both sides of the pond — from Hamlet to The Crucible. You can rent individual productions or purchase a monthly subscription.

A number of other smaller theatres and individual performers south of the border are streaming theatre performances, while we’re still awaiting word on whether Canadian theatre companies will follow suit.

For those itching to visit a museum or art gallery, Google offers free street-view virtual tours of a number of the world’s most popular institutions from Florence’s Uffizi Gallery to Paris’ Musée d’Orsay to Athens’ Acropolis Museum. In fact, Google Arts and Culture allows for street-view tours of more than 500 museums, art galleries and cultural landmarks around the world, not to mention in-depth and up-close explorations of great artworks, art movements, library collections and more.

As well, the Louvre offers virtual tours of some of its exhibits, the Art Gallery of Ontario keeps an online collection and the Virtual Museum of Canada allows visitors to explore the info and art contained in various Canadian collections around the country.

And be sure to check out the Boca Raton Museum of Art, which is offering “new digital online visual arts programs at no cost for all ages, including seniors who are keeping social distance and who might feel isolated” beginning on March 20. These programs are free to Canadians as well, and you can visit its website to learn more here.

In addition, check out the hashtag #MuseumFromHome on Instagram for more info about what other museums are offering.

While streaming services like Netflix and Amazon Prime remain an option, film buffs can enjoy relatively new movies from the comfort of their own home as Universal Pictures eschews its normal 90-day wait period between theatrical and on demand releases. That means recent films like The Invisible Man, Emma and The Hunt, all of which hit theatres within the last month, will land on streaming services this week. The New York Times reports that the films will be available for rent on platforms like Amazon Prime and iTunes. Other movie studios could follow suit as theatres across the country close their doors amid the COVID-19 outbreak.

The Disney Plus streaming service, meanwhile, is releasing Frozen 2 three months ahead of schedule for subscribers. And Elevation Pictures lowered the iTunes purchase price for a number of their titles, including Hustlers, Missing Link, Hacksaw Ridge and The Imitation Game, among others.

And in lieu of hockey, CBC and CBC Gem launched Movie Night in Canada on Saturday nights, running various celebrated Canadian films back-to-back. You can check out the full schedule here.