Remembering Doris Day: The Brightest Star On and Off the Screen 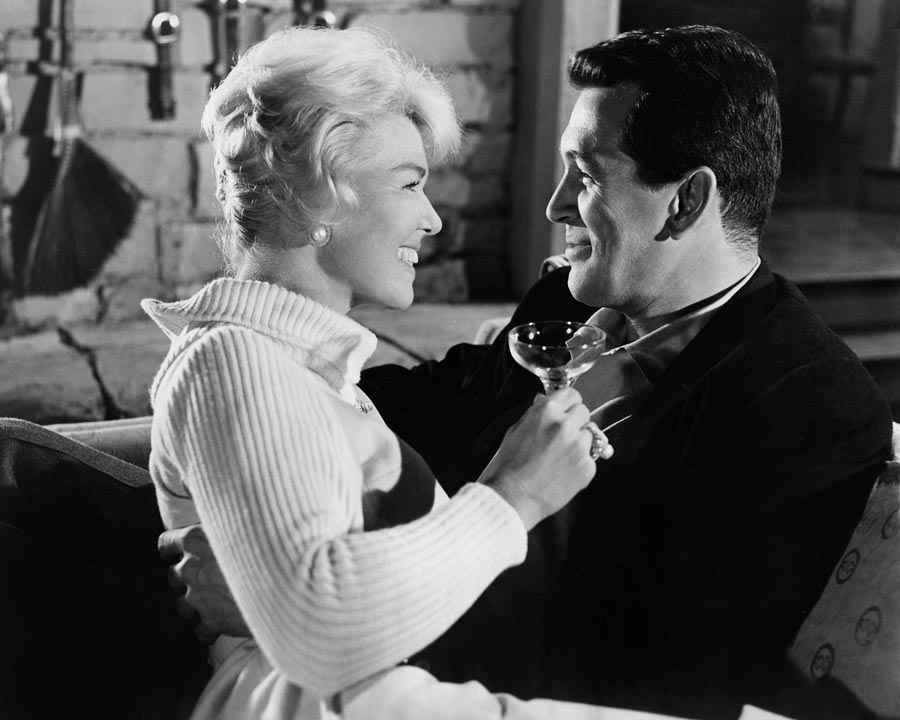 In honour of what would have been her 98th birthday (April 3, 1922) we look back at the extraordinary life and career of the  iconic American actress, singer and animal welfare activist.

Among her hundreds of recordings Doris Day’s signature song is “Que Sera, Sera,” made famous in the Alfred Hitchcock thriller The Man Who Knew Too Much. It’s a deceptively philosophical nursery rhyme ballad about identity and choosing who to be, and just getting on with life. You could say the same of her enduring persona as the upbeat and plucky woman-next-door.

The phrase gets bandied around often but Doris Day’s death last year (May 13, 2019) at the age of 97 can truly be said to be the end of an era — one that Day embodied with a unique pop culture legacy. Across generations, she garnered millions of devotees as varied (from feminist to queer icon) as the more famous fans like Paul Coehlo, William Shatner, Stella McCartney and George Takei are.

I experienced the breadth and scope of Doris Day’s appeal firsthand when, for Zoomer, I attended the Doris Day birthday weekend celebrations last year in Carmel, the coastal northern California town the actress has called home since 1981.

After screening dozens of her movies to prepare for a talk with her fans who gather annually from around the world to fundraise for the Doris Day Animal Foundation (and play Doris Day Trivia Bingo in the lounge of Cypress Inn, the pet-friendly hotel Day co-owns) and an auction of memorabilia with some of her former co-stars I sat in an auditorium with those fans to watch her final film, With Six You Get Egg Roll. It’s typical Day: she plays a single parent trying to navigate family life, judgy neighbours, and dating—all with optimism, kindness, and good cheer.

Talking to her fans, that’s also what resonates off-screen: her lifelong devotion to animal welfare, her empathy and public support for friend and former co-star Rock Hudson in 1985 when he was dying of AIDS at a time when the world didn’t understand the disease, and the triumph over adversity in her own personal life. Resoundingly, their admiration was for some aspect of the fundamental decency of her real-life character that shines through onscreen. “Singing or acting, she manages to produce, in her face or in her voice, an ‘effect,’ a skip or tremor, a feathery edge that touches us,” fan John Updike once enthused.

It’s important to remember that Day’s Hollywood breakthrough came when director Michael Curtiz cast her as the ingenue singer in Romance on the High Seas (1948); he insisted Day skip acting lessons to retain the easy naturalism of her onstage presence. In twenty years of movies that real, relatable charisma never waned whether delivering dialogue or singing in her richly clear voice. Day had taught herself to sing along with Ella Fitzgerald records during a childhood convalescence, emulating Fitzgerald’s crisp and honeyed vocal style. It’s so warmly intimate and reassuring that you can hear the smile in her singing.

In her personality and even as a fashion plate, Day was aspirational and approachable—she wasn’t lofty haute couture Vogue, and that relatability made her popular with the middle-class McCall’s, Good Housekeeping and Ladies Home Journal-reading audience who flocked to her movies. How popular? In addition to being the top female recording star for nearly a decade like her peers Elvis or Frank Sinatra she spent a decade as one of America’s top ten box office draws, including four years at number one. That’s a record not beaten by Elizabeth Taylor at the time, or even by Julia Roberts today; in 1960s cinema exhibitors polls, only John Wayne topped her appeal.

With exception of Hudson (and possibly, James Garner), Day’s string of rom-com co-stars are all handsome, and frequently-shirtless, love interests, but they’re interchangeable: The pictures are foremost Doris Day Movies and she is the star attraction.

In spite of her time in musicals and a few well-regarded dramas, Doris Day is generally associated with the romantic sex farce, stock in trade of the Hollywood studio era’s last gasp. The hybrid situational comedy and battle-of-the-sexes showdown genre (memorably spoofed by Renée Zellweger and Ewan McGregor in Down with Love) is, like Day, very much of its time. It covers the fraught post-War landscape later mined by Mad Men but wrings broad humour from the sense of the unease surrounding the changing workplace politics, shifting gender dynamics, and the burgeoning sexual revolution. Add to that the usual assumptions and mistaken identity plots typical of earlier Hollywood comedies. But beneath the bright veneer of colourful and stylized mid-century modern settings, the 1950s crisis in masculinity is always at play.

The sex comedies make frequent references to Freud and psychoanalysis, and Day embodies the tension of a culture trying to have it both ways: The conservative suburban middle-class ideal based on the traditional order with women as mothers and homemakers of the previous generation, and the challenge to these gender roles disrupting that established social order that titillated men but also made them anxious.

In the paradox of Doris Day as the sexy virgin, Hollywood was working out the tension of changing expectations between two cultural generations onscreen, and was unsure which audience to please. So why not try for both?

After making her name for a decade in musicals, Day earned just one Academy Award nomination, for her work in the smash hit Pillow Talk, one of the top-grossing movies of 1959. With its bantering sexual innuendo (and clever use of split-screens), it was the first of her three pairings with Rock Hudson (and frequent comic foils Thelma Ritter and Tony Randall). It cemented Day’s transition from musicals to bona fide romantic comedy lead (though Day could still usually be found singing the title song.) Most of these movies are variations on a theme about a sexy, assertive single woman of stubborn virtue facing off against a rakish playboy who bristles at both her modesty and independence.

In That Touch of Mink, for example, the plot hinges on will she or won’t she when Day goes on vacation with the millionaire rogue Cary Grant, after briskly taking him to task for rudeness. It’s a mistake, however, to remember Day’s uptight honour in these rom-coms as impenetrable—recall how in Caprice she gamely settles into Richard Harris’s fur-covered lair, with its literally swinging bachelor pad bed suspended from the ceiling. Or the one-night stand (the drunken elopement is perfunctory) in Lover Come Back, where her rival Hudson is a playboy advertising executive who wins accounts by wining and dining clients at a bunny-themed mens club.

In most of these 1960s romantic comedies (two of them-The Thrill of it All and Send Me No Flowers, directed by Canadian Norman Jewison), Day plays a resourceful and self-possessed career woman. With their great apartments and wardrobes her characters were the prototype for later independent and ambitious singletons trying to succeed, from That Girl and The Mary Tyler Moore Show to Sex in the City.

Day’s self-possessed style resonated well before this romantic comedy era, in earlier movies from Calamity Jane to the dramatic biography of 1920s singer Ruth Etting, opposite James Cagney, to her plucky union organizer in The Pajama Game. “I think that Doris Day is the most underrated, under-appreciated actress that has ever come out of Hollywood,” film critic Molly Haskell has said, praising her as a proto-feminist role model, because she “resisted mightily any feminine passivity.”

Throughout her life and career, Day’s persona was as squeaky clean as the bars of Happy Soap she pitched in The Thrill of It All. She herself referenced it, alluding to Oscar Levant’s crass ‘I knew Doris Day before she was a virgin’ remark: “My public image is unshakeably that of America’s wholesome virgin, the girl next door, carefree and brimming with happiness,” Day acknowledged in her bestselling memoir. “An image, I can assure you, more make-believe than any film part I ever played. But I am Miss Chastity Belt and that’s all there is to it.”

Because her offscreen reality was hardly idyllic. In her 1976 memoir Day, for example, said that to play the increasingly tormented newlyweds in domestic dramas Julie and later Midnight Lace, she called on her own difficult personal life. She admitted she had been victimized by several husbands in different ways. Her fist husband was a physically abusive “psychopathic sadist.” Her second was possessive and left because he resented her fame. Her third, Martin Melcher, became her manager and controlled her life and career. The part of Mrs. Robinson in The Graduate was initially offered to Day through him; they turned it down. When Melcher died unexpectedly in 1968, she discovered years of financial impropriety between her husband and their investment advisor. Suddenly she was not only broke but in debt—but like her signature song she soldiered on and made The Doris Day Show for several years, using her salary for legal fees and pursuing recovery of her fortune. Finally in 1974 she was awarded a record settlement of nearly US$23 million.

As Hollywood and the culture changed, after nearly a thousand song recordings, 39 movies and five years of her eponymous television series, Day more or less walked away from it all to northern California and settled in Carmel. She spent time with her beloved son Terry Melcher, a musician and record producer, and devoted herself to animal causes.

A version of this story was originally published on May 14, 2019.