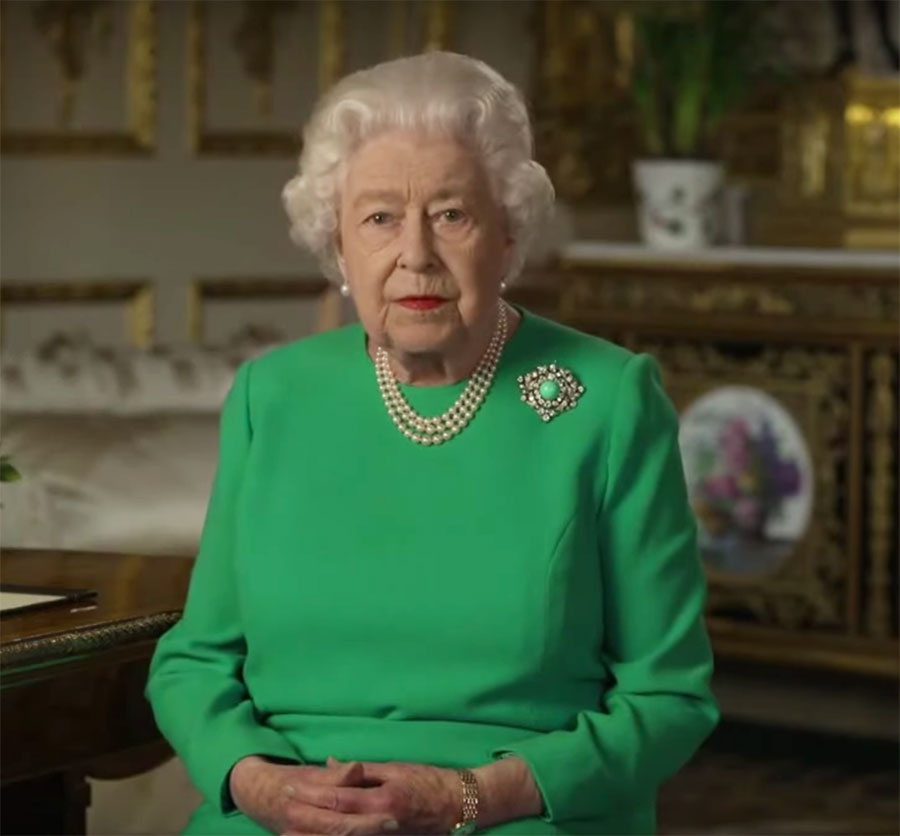 Apart from the Throne Speech, which opens Parliament, and her annual Christmas address, Sunday's speech was only the fourth time the Queen has addressed the nation on a matter of import. Photo: Youtube/BBC

In a brief but powerful address on the COVID-19 pandemic Sunday night, the Queen assured her British and Commonwealth subjects undergoing self-isolation and social distancing: “We will be with our friends again; we will be with our families again;  we will meet again.” This is, of course, a deliberate reference to “We’ll Meet Again,” Vera Lynn’s iconic Second World War song of longing and hope and was the poignant heart of the Queen’s speech. It was during this war that the House of Windsor cemented its place among the great British royal dynasties with its resolute approach to duty in the face of the Blitz and seemingly insurmountable odds.

In the fight against the coronavirus, U.S. President  Donald Trump (the  countries have had a “special relationship” since their Second World War alliance) has called himself a wartime president. But the Queen was a wartime princess. “It reminds me of the very first broadcast I made in 1940, helped by my sister. We as children spoke from here at Windsor to children who had been evacuated from their homes and sent away for their own safety. Today, once again, many feel a painful sense of separation from their loved ones. But now, as then, we know deep down that it is the right thing to do.” In 1945, when she turned 18, the Queen joined the military’s  Auxiliary Territorial Service and was a truck driver and mechanic, achieving the rank of Junior Commander.

The Queen spoke of the loss of loved ones and financial hardship, thanked health and frontline workers, while promising, “We will overcome this.” She has become a comforting presence of resilience and continuity, and images of viewers in England and around the world watching the speech flooded social media. Resplendent in a teal dress and  turquoise brooch from Queen Mary’s collection, with pearls that matched her signature white coif, the Queen was as much a symbol of optimism as the actions of ordinary people in this extraordinary time.

“The moments when the United Kingdom has come together to applaud its care and essential workers will be remembered as an expression of our national spirit, and its symbol will be the rainbows drawn by children. Across the Commonwealth and around the world, we have seen heart-warming stories of people coming together to help others, be it through delivering food parcels and medicines, checking on neighbours or converting businesses to help the relief effort.”

Apart from the throne speech, which opens Parliament, and her annual Christmas address, this is only the fourth time in the 93-year-old monarch’s 68-year reign that she addressed the nation on a matter of import. They included: 1991, at the time of the first Gulf War; 1997, after the death of Diana, Princess of Wales; 2002, on the death of the Queen Mother; and 2012, for her Diamond Jubilee, celebrating 60 years on the throne.

The Queen spoke from the White Room at Windsor Castle, where she has been in isolation with Prince Philip since the middle of March. It was filmed by one cameraman in full protective gear. Her heir, Prince Charles, who tested positive for COVID -19, has since left isolation and was last seen opening a hospital via video link from his Scottish estate.

Prior to this speech, the Queen was last seen on March 25 when @theroyalfamily Instagram account posted a photo of her conducting her weekly audience with British Prime Minister Boris Johnson by telephone.  Shortly  after her speech was broadcast on Sunday, it was announced that Johnson 55,  who had tested positive for COVID-19 and has been in isolation since March 27, was admitted to hospital for tests due to a high fever. “This is a precautionary step as the Prime Minister continues to have persistent symptoms  of coronavirus 10 days after testing positive for the virus,” said Downing  Street, which at the time stressed that Johnson is still leading the government. Johnson’s pregnant 32-year-old fiancee, Carrie Symonds, has also tested positive for the virus and exhibited some symptoms but announced she is on the mend. There are currently 47,806 cases of coronavirus in the U.K. with 4,934 deaths.

On the day following the Queen’s speech, on Monday afternoon, the Prime Minister was moved to intensive care as his conditions worsened, and as a precaution in case he required ventilation. Downing Street has since said that Foreign Secretary Dominic Raab was asked to deputise “where necessary.”

So perhaps there was no better time for the Queen’s steadying speech. It evoked the sacrifices of the Greatest Generation – sometimes known as the Silent Generation – who just keep calm and carry on. But her call was to all of us – boomers, gen-Xers, millennials, generation Z and those to come. It’s a universal message: just substitute  “Britons” and “this country” for whatever your nationality happens to be.

“I hope in years to come everyone will be able to take pride in how they responded to this challenge. And those who come after us will  say the Britons of this generation were as strong as any. That the attribute of self-discipline, of quiet good-humoured resolve and of fellow feeling still characterize this country. The pride in who we are is not part of our past; it defines our present and our future.”

Watch the Queen’s full speech below