Kennedy Clan in Mourning as Another Shocking Tragedy Strikes 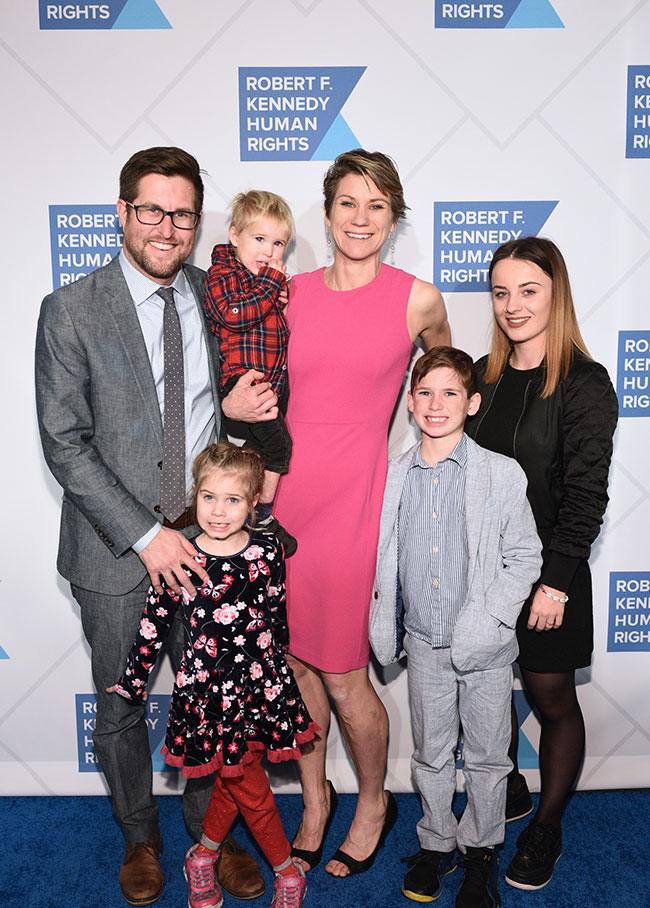 Maeve Kennedy Townsend McKean (pink dress) and her son Gideon (in grey), seen here with the rest of their family, died in a canoeing accident on Friday after attempting to retrieve a ball from Chesapeake Bay in Maryland. Photo: Mike Pont/Getty Images

It was a familiar hum heard over the weekend from members of America’s most famous and most tragedy-prone dynasty.

“We love you, Maeve. We love you, Gideon. Our family has lost two of the brightest lights. Grateful for the prayers. Hold your loved ones tight,” expressed Joe Kennedy III, currently the only Kennedy serving in the U.S. Congress.

Similar condolences and bids for prayer poured in from other branches of the clan, including Maria Shriver and, then, most tragically, from Kathleen Kennedy Townsend who had just endured the greatest of indignities: the death of a daughter, Maeve Kennedy Townsend McKean, 40, as well as an eight-year-old grandson, Gideon Joseph Kennedy McKean.

“Maeve shone. The fire emanating from her soul warmed us all,” the eldest child of Ethel and Robert F. Kennedy wrote. “My heart is crushed, yet we shall try to summon the grace of God and what strength we have to honor the hope, energy and passion that Maeve and Gideon set forth into the world.”

Death by canoe on Chesapeake Bay. Pushed by the tide into the open bay. A slip into the vessel to retrieve a ball.

So circled the reports about the horrific accident.

And as the flag-bearers of a family – once dubbed Camelot by Jackie Kennedy – have done so many times over the decades, they huddled together in grief, as sotto voce murmurs of a “Kennedy Curse” made the rounds for not the first, second or even fifth time.

The medieval fancy of an ancestral jinx? A persistent and pre-determined dark cloud?

Coming not even a year after the accidental overdose of yet another granddaughter of Robert and Ethel – 22-year-old Saoirse Kennedy Hill, occurring on the Kennedy Compound in Hyannis Port – the compulsion to believe so was possibly just too hard to resist. Whatever else could explain time being snatched away from Maeve, a public health and human rights lawyer (who taught bioethics and human rights at Georgetown) and her happy, soccer-playing boy?

If nothing else, a footnote to add to the breadth of a Kennedy Curse, which, naturally, is a myth that has only burgeoned over the decades and, moreover, has its own Wikipedia Page here in 2020. It started with the storied first generation – when two of the nine of children of Joe and Rose Kennedy did not make it to 30 (Joseph Jr. and Kathleen “Kick” Kennedy both died in plane crashes in the 1940s, the former being the object of Joe Sr.’s initial aspirations for the U.S. presidency). Likewise, their eldest daughter, Rose, who was lobotomized at 23 and remained institutionalized all her life. It apexed during the 1960s when the entire world rattled with the two-for-one assassinations of President John F. Kennedy and, just a few years later, his brother, Robert. (A time so transformative that, as recently as last month, Bob Dylan released a 17-minute-long song called Murder Most Foul about the JFK murder. Touted by one critic as a “postcard from the apocalypse,” it made an existential link to the pandemic we are currently in the middle of.)

Since then? Any number of fatalities, demons and misfortunes that would likely require a wall-sized chart to fully encapsulate re: the Kennedys: alcoholism, suicide, drug addictions, a fatal ski accident, another flight crash, a spectacular court case involving rape charges and cancer.

The genesis of the curse as an idea? Hardened Kennedy-philes will recall that it crescendoed with Ted Kennedy after the Chappaquiddick affair, when his car drove off a bridge, resulting in the drowning death of a 28-year-old passenger Mary Jo Kopechnne, on July 18, 1969. As the news about that accident reverberated around the world back then and about which pop culture has continued to make pulp of since (there was a movie called Chappaquiddick fairly recently), history tells us that, in a tense televised statement made after the tragedy, the senator wondered out loud “whether some awful curse did actually hang over all the Kennedys.”

Fast-forward to July 16, 1999 when the curse would have its next biggest flare of publicity: the day that John F. Kennedy Jr. fell from the sky near Martha’s Vineyard, along with his wife, Carolyn Bessette, and her sister Lauren. If there had not been enough tragedy for one family, then the spectre of the one-time boy who saluted the casket of his father in 1963 also perishing so young fully cemented the idea.

A case of the Kennedys flying too close to the sun? A family of dare-devils and risk takers, taunting the gods? Or simply a case of a family so large – consider that there are well over 100 Kennedys now – that the odds of bad things happening merely tilt that way?

Speaking to the alcoholism and the drug use, in particular, J. Randy Taraborrelli, a frequent biographer of the Kennedys, has mused that “a lot of the addiction is trauma.” That is to say, “You don’t survive the death of your father in the case of JFK or Bobby’s kids or the death of an uncle without trauma, and some turned to drugs as a way of escaping. Drugs were also part of the culture, especially among some of the young men in the family. And there’s also entitlement. Each of these things is a piece of the puzzle.”

Though, certainly, there were plenty of Kennedys who did not become addicts.
Trying to make sense of the senseless? Well, that is what human beings do and have always done. And that might explain the preponderance of the curse as a concept. But, then, do we really need magic to explain the idea of an American president in an open-top motorcade being made a target in a country full of guns? Perhaps not. “If assassinations are an occupational hazard of the politically famous, then private plane crashes and skiing accidents are an occupational hazard of being very rich,” as an op-ed in The Irish Times once contended.
What does a dynastic curse actually mean? It is riddled with the idea that nothing is an accident, nothing random. That the tragedies are as much part of the natural order when it comes to the Kennedys as is their entitlement and their gifts. And yet, when poor people suffer multiple tragedies – or entire countries fall on hardened times – we don’t call it a curse. We just call it bad luck.

5 Books About JFK on 55th Anniversary of His Death