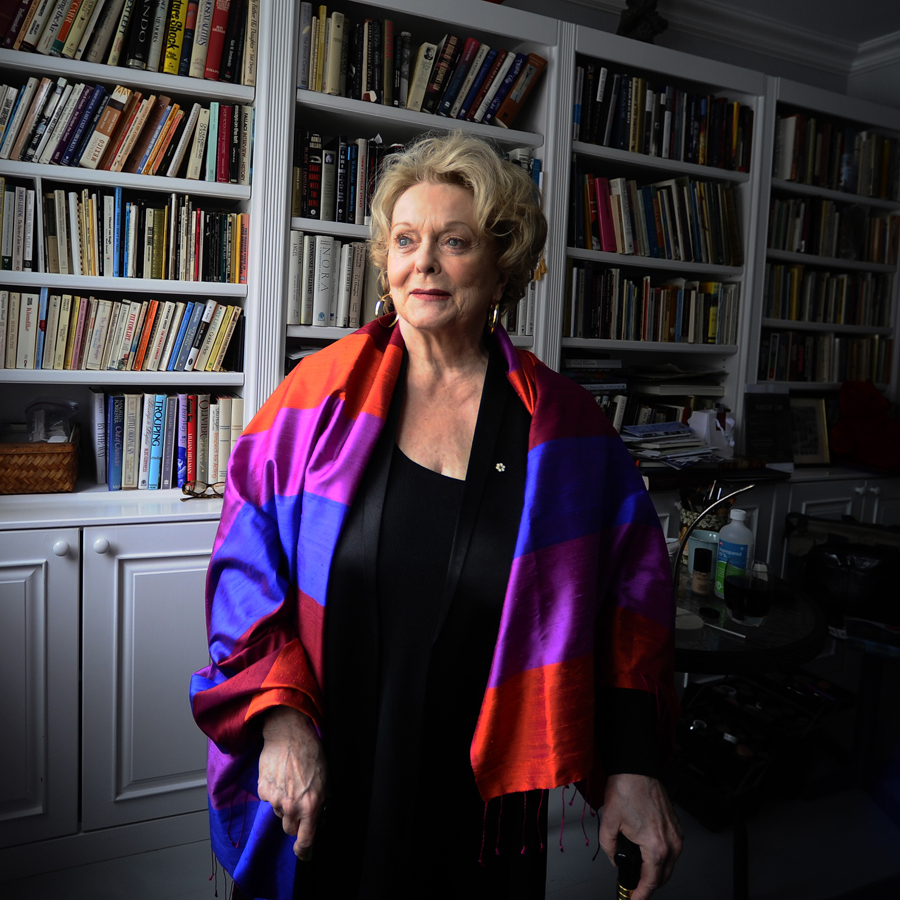 Canadian actress and activist Shirley Douglas, who died on April 5 at age 86, spent most of her life as a fierce defender of the public good, standing up for causes from civil rights to public healthcare. Photo: Colin McConnell/Toronto Star via Getty Images

Canadian actress and activist Shirley Douglas recalled distinctly the moment in 1969, when police officers knocked in the door of her Los Angeles home to arrest her for conspiracy to possess unregistered explosives in relation to her support for the Black Panthers.

“The [police]man was holding his gun right near my head,” she told George Stroumboulopoulos in a 2013 interview, remembering that the officer’s hand quivering. “And I thought, ‘Please, would you just move the shaking hand because this isn’t going to get us anywhere.’”

That’s right — the actress, with a gun pointed at her head, was concerned that the man holding the weapon was too nervous in the moment.

Douglas’ son, actor Kiefer Sutherland, announced her death on April 5 at the age of 86 on Twitter, writing, “Early this morning my mother, Shirley Douglas, passed away due to complications surrounding pneumonia (not related to COVID19). My mother was an extraordinary woman who led an extraordinary life. Sadly she had been battling for her health for quite some time and we, as a family, knew this day was coming.”

Far from the timid, polite-to-a-fault Canuck stereotype, Douglas, who was born in Weyburn, Sask., on April 2, 1934, spent most of her life as a fierce defender of the public good, a fighter and disrupter in the vein of Jane Fonda or Gloria Steinem who wasn’t afraid to use her platform to make noise in support of causes in which she believed.

It would have been easy, too, for someone with less strength and tenacity than Douglas to get lost in the shuffle of famous men who bookended her life. She is, of course, the daughter of Tommy Douglas — the first federal NDP leader, former premier of Saskatchewan and, most famously, the father of Medicare; former wife of screen legend Donald Sutherland; and mother of famed actor Kiefer Sutherland.

And while she likely inherited some of her fighting spirit from her father, Douglas forged ahead on her own path, created her own legacy and found her own voice separate from her famous familial ties.

“I think to live your life, you have to live it and, if you see something that offends you morally or any other way, you have to follow that and take it up,” she once told The Canadian Press. “And when you have no choice and you see something, it’s like if you see a child going to be run over by a car — you grab the child. And for me, many things that I see wrong are as obvious as grabbing a child. And so what else would you do?”

In the late 1960s and through the 1970s, while living in Los Angeles with then-husband Donald Sutherland and her twins, Kiefer and Rachel, Douglas pivoted from acting – which she’d done in Canada and the U.S. as well as on stage and screen in England – to activism, taking up the mantle of everything from the Black Panthers and the Civil Rights Movement to anti-Vietnam War protests and causes related to women’s rights and immigrants.

Sure, in today’s era of celebrity advocacy, perhaps the idea of an actress aligned with political causes seems quaint. Very few celebrities, however, spend time in jail for allegedly buying unregistered explosives (she was later exonerated) or risk a fledgling Hollywood career – she appeared as piano teacher Mrs. Starch in Stanley Kubrick’s 1962 film Lolita – to advocate for what they believe. In fact, following her arrest, the U.S. government revoked Douglas’s work permit. She returned to Canada in 1977, divorced and a single mother and kept fighting for everything from nuclear disarmament to Canada’s publicly funded health care to greater visibility and promotion of homegrown performers.

“She was an activist who used her fame to fundraise. She was the most ardent and articulate defender of public medicine for decades. Her legacy lives well beyond the stage and screen,” Ian Capstick, a communications expert who has worked with both the Liberal and NDP parties over the years, tweeted following her death.

Of course, Douglas, ever the force, returned to acting in Canada and brought her strength to roles like that of legendary Canadian activist and suffragette Nellie McClung in a 1978 TV film of the same name, the overbearing May Bailey on the Canadian television series Wind at My Back (1996-2001) and the first female U.S. Secretary of State Madeleine Albright in the 2006 TV movie The Path to 9/11 among many others. She also got the chance to perform at the Stratford Festival in Ontario and, in 1997, alongside her son, Kiefer, as mother and child in Toronto and Ottawa runs of Tennessee Williams’ The Glass Menagerie.

“Shirley Douglas quickly became sought after for the size and power of her stage presence, the intensity of her playing style and her astounding voice,” writer Sandra Nicholls wrote of Douglas’ return to Canada in the late 1970s for the Canadian Encyclopedia. “She played a range of powerhouse characters.”

Douglas received a slew of accolades for her work, including the Order of Canada in 2003 and the Queen Elizabeth II Diamond Jubilee Medal in 2012. And even toward the end of her life, were it not for the degenerative spinal condition that she lived with, it wouldn’t have been hard to imagine Douglas marching in the streets like a Canadian Jane Fonda, in support of ongoing causes from women’s rights to climate change – protests that take place in the spirit of the sort Douglas and her cohort undertook decades earlier.  Indeed, it’s Douglas’s strength that characterized her to the end.

Among the many online tributes following Douglas’s passing, Antoni Cimolino, Stratford’s artistic director, recalled witnessing “that much talent, brains and power welded to an equal part of kindness” on stage, while Prime Minister Justin Trudeau celebrated Douglas as “a tremendous talent, a tireless advocate and a fearless activist who never stopped fighting for what she believed in.”

And ex-husband Donald Sutherland, speaking to the Canadian Press, remembered Douglas as someone who has “fought an extraordinary battle these past five years. That battle is over now. Peace has come.

“So many memories have taken over that battlefield. Memories, stories and tears have enveloped our loss. Shirley Douglas was passion personified. She was truly a force of nature.”

“You, Sir, Are No Tommy Douglas” — Kiefer Sutherland Blasts Ford for “Offensive” Tweets