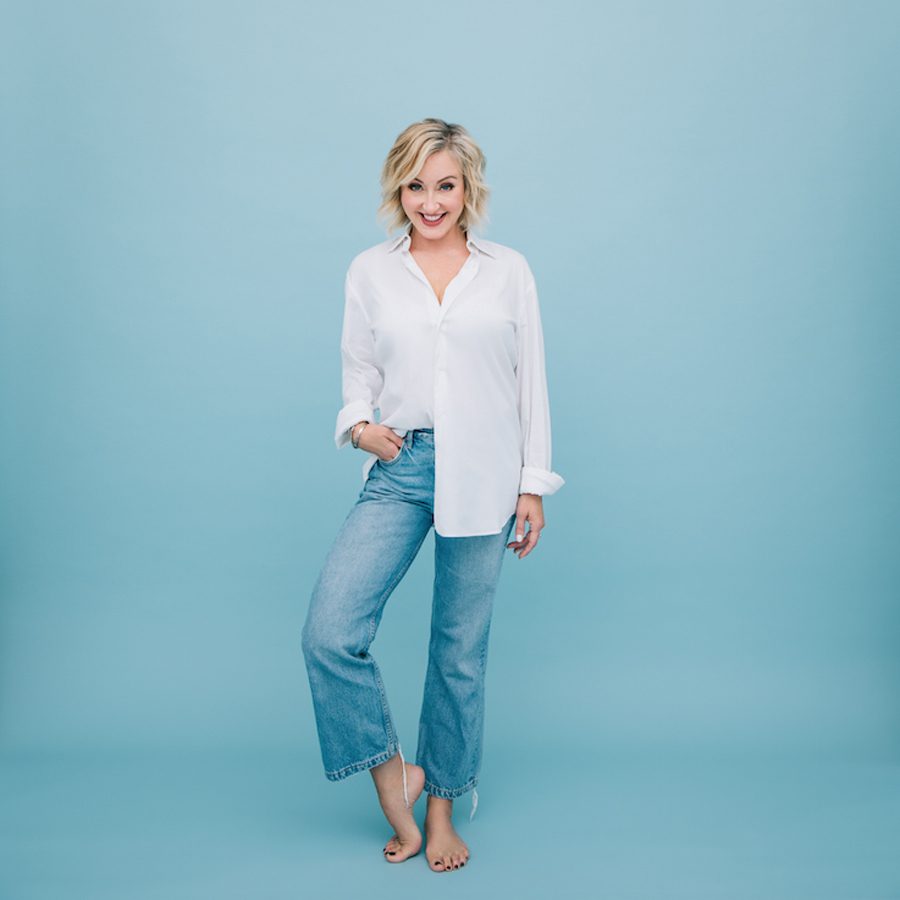 Shantelle Bisson was inspired to write her new parenting book, "Raising Your Kids Without Losing Your Cool," after a number of her 40-something friends began having kids. Photo: Renata Kaveh

Shantelle Bisson is all about not losing your cool. And she sort of has to be, as a former actress and dancer turned writer, parenting expert, television show developer, marina owner and supporter of multiple children’s charities. She’s also the wife of Murdoch Mysteries star Yannick Bisson and mother of their three daughters, two of whom — their 29-year-old and 23-year-old — are self-isolating with the Canuck couple in their Los Angeles home.

“Something that we’ve been doing a lot of is trying to kind of keep as much time to ourselves as possible. Because I think that’s the one downside when you’re all cooped up in one space. It’s like you end up spending entirely too much time together, and you forget that it’s okay to walk away and go be in your room by yourself for a couple of hours and read or meditate,” Bisson explains over the phone from L.A. “So it’s super important to remember that you’re still individuals, you’re still your own person and you gotta do your own things and want to do your own thing. So finding a way to incorporate that into your quarantine existence, I think, is a really good way to keep your cool.”

The 50-year-old is spending a lot of time these days talking about keeping her cool, thanks to the launch of her debut book, Raising Your Kids Without Losing Your Cool, which aims to lay out a game plan for everything from the delivery room to the nursery to navigating social media, gender-reveal parties and, yes, ensuring Mom and Dad still make time for themselves beneath the sheets. Bisson originally set out to write a book about not losing your cool while moving — she loves moving homes, she and Yannick own multiple residences and the couple recently purchased and renovated their “forever home” in Toronto — but changed her mind when she noticed a number of her friends becoming first-time parents in their 40s. For Bisson, who had her first child at 19 and the next two in her 20s, the light bulb went off.

“They have fun,” she says about the 40-something first-time parents she knows, “but for the most part they’re like, ‘Oh my God, I lived until I was 40 without kids. What the hell? Am I out of my mind?’ And I thought, ‘Oh guys, you need to know some things.’”

When it comes to 40-something first-time moms and dads, Bisson warns, “I think that the biggest adjustment that people aren’t ready for when they’re older is how [the life you’re used to] comes to a screaming halt and … you are not the priority of your day in, day out life.”

She says older parents can sometimes seem haggard and genuinely unhappy for that reason and often, if they try to maintain their old life with a child, “everybody’s disconnected because there’s such a longing for that older parent to still have their identity and still have their lives be how they were before the baby came around. And the reality is it just can’t be that way anymore.”

For Bisson, the solution is, “You have to find a way to continue to feed your own soul and be true to yourselves and your interests and the way that your life has been thus far, but you also need to have the child fit in with that.”

For herself, looking back on her own years of parenting three young daughters, Bisson notes that while things weren’t perfect — she admits that relationship struggles between her and Yannick “snowballed and ran downhill to our children” — there isn’t much she’d change about the way she and Yannick raised their kids. One thing the ensuing decades have changed her mind on, however, is spanking.

She laughs when she recalls being chased around the house by her mom with a wooden spoon when she was a kid — a scene with which many of her generation can relate. When it came to her own children, she says spanking was always a structured action never rooted in rage — “two little spanks on their bum. And you never hit them with your hand. You need a spanking paddle.” And while she agrees with the necessity of teaching kids that there are consequences for their actions, “if I were to parent today … I would find a consequence that didn’t involve laying a hand on them.”

How to Turn 50 Without Losing Your Cool

Aside from parenting, Bisson has spent a lot of time focusing on turning 50 without losing her cool. She hit the big 5-0 milestone last year and notes that she and Yannick, who is the same age, had opposite reactions to their respective birthdays. Yannick “was a wreck, and he was really depressed and he was really not handling it” as he approached his birthday, while Bisson “was cruising toward 50, and I was excited.” But when their birthdays hit, Yannick experienced a sense of calm while Bisson struggled.

“When I hit 50, I have to say probably the first six months I didn’t do well. And I’m starting to come out of it now,” she says, noting that her perspective shifted to all the things she felt she hadn’t accomplished. “Like, okay, so now I’m 50 and … I wanted to be a successful actress. Well, that didn’t happen. And I wanted to do this, and that didn’t happen.”

A notion that an older female friend put forward, that women start to become invisible in society after age 50 while men become revered elders, didn’t help. “Well, maybe that is what I’m afraid of,” Bisson remembers thinking, “like, I’m going to have come and gone, and no one will be none the wiser. No one will care that I was here. No one will care that I live and now I’m 50. And I’m not young anymore but I’m not old. So who am I? What am I? Where do I fit in?”

She says Yannick helped ease her anxieties about turning 50, reframing the perspective to focus on everything she has accomplished — from writing her book to rejuvenating and operating a successful marina, Shantilly’s Place, a family-friendly locale in the northern Kawartha region of Ontario, and raising three independent, successful daughters. She also plans to expand her first book into a series, including future releases about both raising teens and having a relationship with your adult child without losing your cool.

“So it took me a while to wrap my head around it and to realize that you’re not dead at 50,” she says, pointing to women like Helen Mirren, Michelle Obama, Nicole Kidman, Meryl Streep and Laura Dern as inspirations. “You see all these women who are doing incredible things for the world in every realm to remind you that you don’t disappear at 50. So it was an adjustment period. But I think I’m there.”

And a year after turning 50, the Bissons have another milestone to look forward to — their 30th wedding anniversary on May 26. The couple, however, struggled to decide how to celebrate, never actually settling on one of the travel ideas they’d considered. Then Yannick found out he was scheduled to direct an episode of Murdoch Mysteries on their actual anniversary, before everything got put on permanent hold anyway because of the COVID-19 pandemic.

“I’m sure we’ll do a nice dinner on the actual day, but as far as something grand and fabulous and wonderful, it’s just going to have to wait until the world rights itself,” Bisson says. “So probably in the fall, which is a surprise now.”

Raising Your Kids Without Losing Your Cool is available now.

How to Age Well From Author Camilla Cavendish