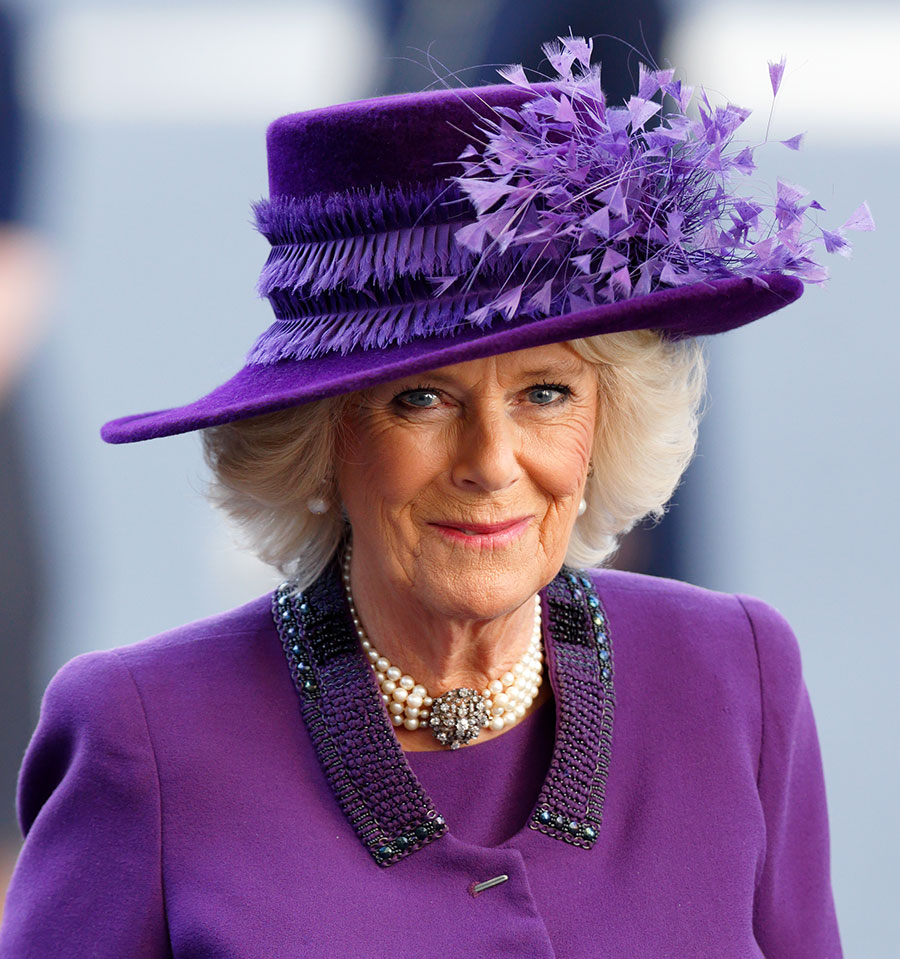 In honour of Camilla, Duchess of Cornwall, celebrating her 73rd birthday today (July 17), we’re looking back at the April release of her COVID-19 reading list. And while she released the list days after celebrating her 15th wedding anniversary with Prince Charles, her royal book round-up now also serves as a go-to list for great summer reading!

Move over, Oprah, Barack and Reese. There’s a new pretender to the literary influencer throne: Camilla, Duchess of Cornwall and wife of Charles, Prince of Wales, has released a reading list curated “to provide some inspiration for those isolating at home …” during the COVID-19 pandemic. She knows of what she speaks. Camilla was recently released from quarantine and reunited with Charles, who had tested positive for the coronavirus and is now also out of quarantine. The couple have remained secluded at their Scottish estate, Birkhall, and the book list was first published in The Press and Journal, a local newspaper who referred to Camilla by her Scottish courtesy title, the Duchess of Rothesay.

“Ernest Hemingway, famously, once said, ‘There is no friend as loyal as a book,’” wrote Camilla, whose list was also posted to the Clarence House Instagram account. “In these challenging times when we are isolated from the ones we love, many of us are finding comfort in reading, to fire up our imaginations, to take us on journeys and to make us laugh. With that in mind, here is a list of my dearest ‘friends.’”

Camilla is patron of the Royal Society of Literature, the National Literacy Trust as well the charities Book Trust and Coram Beanstalk, which promotes reading to children and families. The list of nine titles revealed her to be a discerning, if eclectic, reader, with a variety of genres from classic to fantasy to thriller. The Light Years, the first book in the Cazalet Chronicles series – a multi-generational saga set during the Second World War – by Elizabeth Jane Howard received Camilla’s most ringing endorsement: “If I were sent to a desert island with one book, this would be my choice!” The final book on her list is a memoir, Travels on My Elephant, by Mark Shand, Camilla’s brother. Shand , a well-regarded travel writer and conservationist, died in 2014 in New York after he fell and hit his head on a sidewalk following a fund-raising auction for his wild-life foundation, Elephant Family. “My late brother’s tale of his love affair with Tara, an Asian elephant on their journey across India … it always brings at tear to my eye.”

The other books on her list, and her comments, courtesy of Town and Country magazine, include:

Restless: A Novel, by William Boyd: “A wartime thriller featuring a resourceful woman in grave danger… a great read.”

A Tale of Two Cities, by Charles Dickens: “This is a wonderful story of romantic and familial love set against the violence of the French Revolution.  It is one of my favourite books by Charles Dickens and, in my humble opinion, one of his best!”

The Book of Dust: The Secret Commonwealth, by Philip Pullman: “I have enjoyed every book that Philip Pullman has written and have followed Lyra through all her trials.  This book (the second in the trilogy) is no exception, as we immerse ourselves in this fantasy’s mystical adventures. Storytelling at its best.”

A Gentleman in Moscow, by Amor Towles: “A wonderful book which gives the reader an understanding of life in post revolution Moscow, through the eyes of a Russian aristocrat sentenced to life in Moscow’s Metropol Hotel.”

The Red Notebook, by Laurain Antoine: “A clever, funny novel… a masterpiece of Parisian perfection.”

The Architect’s Apprentice, by Elif Shafak: “A magical, colourful tale set during the height of the Ottoman Empire.”

This list came just days after Charles and Camilla marked their 15th wedding anniversary with the release of a casual snapshot that underlined all was well with their health, their marriage and her position in it, too.

Prince Charles was first beguiled by the then Camilla Shand back in 1972. “My great-grandmother and your great-great-grandfather were lovers. So how about it?” was her bold approach. Naturally, she was deemed too modern (that is, un-virginal) to marry the heir to British throne. So he stropped off to the navy and, while he was at sea, she married the dashing British army officer, Andrew Parker Bowles, instead.

But Camilla and the Prince remained emotionally if not physically embroiled, a fact that caused Diana Spencer to have cold feet just before her wedding to Charles, which one of her sisters replied, “Too late, Dutch. Your face is already on the tea towels.” On July 29,1981, as 756 million people around the globe watched Diana take her fateful walk down the St. Paul’s Cathedral aisle, the Princess of Wales later admitted that she anxiously searched for Camilla among the 3,500 guests. Charles resumed his affair with Camilla in 1986. Charles and Diana formally separated in 1992 and, a year later, a tape of a 1989 call between Camilla and Charles where he said he wanted to live in her trousers and imagined being a tampon was leaked. In a 1994 interview with his biographer Jonathan Dimbleby, Charles admitted to adultery but only after his marriage to Diana “became irretrievably broken down, us both having tried.” He described Camilla, who was still Mrs. Parker Bowles, as “a great friend.”

But in the televised “War of the Waleses,” Diana got the upper hand. A year later, Camilla was forever branded an interloper when, in the infamous Panorama interview, Diana told BBC journalist Martin Bashir, “Well, there were three of us in the marriage, so it was a bit crowded.” This was the headline but, in the interview, Diana also confessed to love affairs of her own and intimated that Charles was not “at peace“ enough to be king and did not shut down Bashir’s nudging that he could be skipped over, with the crown going directly to their eldest son, William. The Queen had heard enough. She ordered Charles and Diana to divorce, which they did in 1996.

In that interview, Diana also said that she would never be queen, wanting only to be a queen in people’s hearts, and her 1997 death in a Paris tunnel saw to that. But the question was: would Camilla ever be queen? In the public outpouring of grief and anger after the car crash, Camilla was targeted, and a perhaps apocryphal story that she was pelted with bread rolls in a country supermarket was re-circulated.

But slowly and surely, Camilla, by then herself divorced, was being quietly integrated into Charles’ public life. They waited until 1999 to make their first photographed appearance, called Operation Ritz (for a party at The Ritz Hotel in London), as a couple with Camilla sporting a new manicured look. And she took on inoffensive charity work – the opposite of Diana’s polarizing anti-landmines crusade, her last – such as becoming president of the National Osteoporosis Society in 2001.

When they finally married in a low-key civil ceremony at Windsor Guildhall in 2005, the public was ready to forgive but not forget. Despite a reigning king’s wife always being known as the queen consort, Charles’ office, Clarence House, announced at the time: “It is intended that Mrs. Parker Bowles should use the title HRH the Princess Consort when the Prince of Wales accedes to the throne.” And earlier this month, after it was floated by Camilla’s supporters that she had earned the right to be queen, Clarence House felt compelled to respond: “The intention is for the Duchess to be known as Princess Consort when the Prince accedes to the throne. This was announced at the time of the marriage, and there has been absolutely no change at all.”

Happy anniversary? Yet this would be a promotion for Camilla: though she was given the HRH prefix along with the duchess title on her marriage, she has never been termed the Princess of Wales as it was tacitly agreed that, given the circumstances, it would be a tactical blunder and PR nightmare. The long shadow of their divorces – Charles will be head of the Anglican Church, after all – and Diana still looms, but the couple have finally found their place in the sun.

Over the years, public affection has blossomed for Camilla, an offshoot of the world catching up with her husband on topics like sustainability and conservation (he was an early adopter for which he was ridiculed). She clearly makes him happy, and more of her storied warmth and humour have burst into view. She delighted the world press when she gave the assembled cameras a broad wink behind the backs of Donald and Melania Trump when they were being ushered in to a Clarence House meeting with her and Charles during the American President’s 2019 state visit to the U.K. Camilla also made a point of turning to speak to Meghan and Harry during last month’s Commonwealth Day Service, her stepson and wife’s last royal engagement, which a chilly William and Kate chose not to do. Camilla seems to get “it,” whatever “it” happens to be.

“Of course,” Diana answered in her and Charles’s awkward engagement interview, when they were asked if they were in love. “Whatever love means,” her future husband interjected. It’s clear it meant Camilla to him. For years, she was defined by Diana’s nickname for her – “the Rottweiler.“ This was not just to mock Camilla’s looks but “because once she got her teeth into someone, she won’t let go,” as Diana once complained to a friend. But it was Charles who couldn’t quit her, too. Camilla was also ridiculed for being an all round horsey type which the Queen made a virtue of with her wedding toast to the couple where she compared the Grand National Steeplechase, which happened on the same day, to their love story. “Despite Becher’s Brook and The Chair and all kinds of terrible obstacles, my son has come through, and I am very proud and I wish them well. The couple have finally arrived in the winner’s enclosure.”

It is a win for Camilla, Charles and the Royal Family that, 15 years later, Camilla is liked and comfortable enough to reveal herself through the intimacy of her reading list and by showing herself without the protective layers of protocol, approved coifs and clothes. In a more lyrical part of the Camillagate phone call after Camilla says she has achieved nothing in life, Charles tells her, “Your greatest achievement is to love me.” “Oh, darling, easier than falling off a chair,” she responds. “You suffer all these indignities, tortures and callumies,” he persists. Camilla: “Don’t be so silly. I’d suffer anything for you. That’s love. It’s the strength of love.” And so the fairy tale was actually a story of a star-crossed love triangle that became happily – ever – after for two of them.

Update: Boris Johnson Discharged From Hospital After Being Treated for COVID-19, Praises NHS Staff for Saving His Life